On Friday, Secretary of the Interior Salazar praised a new solar project in California, expected to be the largest in the world, as a major milestone in fulfilling President Obama’s promise to expand renewable energy.[i] The first phase of the project, to be completed in 2013, is being supported by a U.S. Department of Energy $2.1 billion loan guarantee. The 1,000-megawatt Blythe Solar Power Project in Riverside County, California claims to be able to power between 300,000 and 750,000 homes and create 1,000 temporary jobs and about 200 permanent jobs.  The truth is that solar power alone will dependably serve very few homes because it is too unreliable but will cost up to 5 times as much as the cheapest form of electrical generation. Consumers, businesses, and the taxpayer will suffer.

Of course, Secretary Salazar does not tell the public that this solar plant will provide only a small fraction of the power that a 1,000 megawatt fossil fuel or nuclear plant would provide. According to the U.S. Energy Information Administration (EIA), a new solar thermal plant has an average capacity factor of only 18 percent, which compares to a new natural gas combined cycle plant at 87 percent, a new coal-fired plant at 85 percent and a new nuclear plant at 90 percent.[ii] 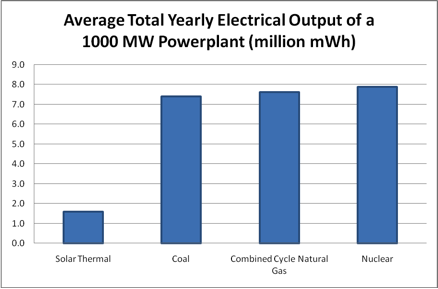 Not only is the annual production less but the cost of the solar plant is much higher. According to the EIA’s analysis of the cost of new generating plants which begin producing power in 2016, the projected   capital cost of a solar thermal power plant excluding finance charges is $4,692 per kilowatt compared to $2,844 per kilowatt for a dual-unit coal-fired plant and $978 per kilowatt for a natural-gas combined cycle plant.[iv] So, the cost for a 1,000 megawatt solar plant would be $4.7 billion dollars, a coal-fired plant would be $2.8 billion, and a natural gas combined cycle plant would be just under $1 billion.

Of course, the capital component is just one part of the total generating cost. According to EIA, the annualized cost of generating a kilowatt hour of electricity from each of these plants is: 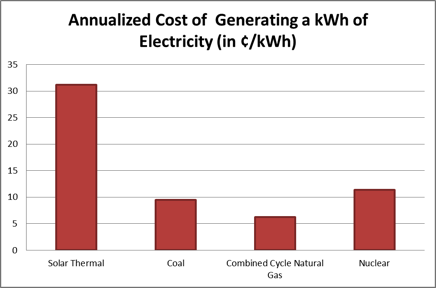 The annualized cost includes the capital component with financing charges (similar to one’s mortgage payment); the operation and maintenance cost; the fuel cost, if applicable; and the transmission cost. It also takes into account the capacity factors of the plants, which is one of the reasons that the solar plant is so much more costly on an annualized basis of generation. Its annualized cost is 5 times as much as the gas plant, over 3 times as much as the coal plant, and 2.7 times as much as the nuclear plant, even though there is no fuel component associated with solar plants. It should be noted that EIA’s annualized cost for a coal plant is increased relative to the other plants by including a 3 percentage point increase in its financing charge, which is equivalent to an emissions fee of $15 per metric ton of carbon dioxide. Also, as noted above, all figures provided by EIA are for new plants, and do not reflect the operating costs of current generating facilities, which are quite different.

Solar generating plants have a place as a starter energy source in remote places that do not have access to an electricity grid. Past that, this technology remains radically inefficient and uneconomic. Officials of the Obama Administration mislead the public regarding renewable energy, and solar energy in particular, by touting jobs and power generation without comparison to other technologies. Such frankness would naturally raise questions about why taxpayers and ratepayers are put at such risk.

It is not surprising that the Obama Administration’s promise to provide solar energy is moving at an extremely slow pace. Even quick solar projects (e.g. adding roof top solar panels and a solar water heater to the White House) are very behind schedule.

“The White House will lead by example,” United States Secretary of Energy Steven Chu said during remarks at the GreenGov Symposium on Oct. 5, 2010. “I’m pleased to announce that by the end of this spring, there will be solar panels that convert sunlight to energy and a solar hot water heater on the roof of the White House.” But this project now has a completion date of September 2011 or later.[v]

The point of cap-and-trade is the tax money