Some countries, such as Germany, have built such a great deal of intermittent renewable generating capacity that their traditional generating technologies are not bringing in enough revenue to survive, which means either consumers will need to make adjustments regarding how they use electricity or government regulators will need to make adjustments regarding how electricity is priced to pay for the flexibility needed. Regardless, electric customers should expect changes in the future—either in price or in availability of electricity—or both—to deal with the increased advent of intermittent renewable generation.

IER has discussed this issue with respect to wind power whose construction largely preceded solar power due to its lower cost. But, now system operators are preparing for the advent of increased solar power and its potential havoc on the grid, including solar on residential rooftops and businesses.

The California Independent System Operator (ISO) has developed a ‘duck curve’ to describe how massive amounts of customer-sited photovoltaic systems could cause problems to the state’s supply-demand balance on its electricity grid. It provides a scenario of a sunny day where distributed photovoltaic generation pulls down non-solar electricity demand to extremely low levels at midday when the sun is at its hottest and distributed photovoltaic generation is at a high. That is, the state’s non-solar generating capacities must reduce their production to inefficient lows when the energy supply at the “belly” of the duck from solar distributed generation is at its highest. (See graph below.)

Later in the day when solar generation is declining and California residents are coming home from work and turning on their appliances, electricity demand ramps up dramatically, which requires flexible generation capacity to come on-line very quickly to meet it. The California ISO is worried that the “neck” of the duck curve could overwhelm the state’s available generating capacity.[i]

More specifically, the figure shows a net load curve for the March 31 for years 2012 through 2020. This curve shows the megawatts the system operator must follow on the y axis over the different hours of the day shown on the x axis. There are several distinct ramp periods. A ramp in the downward direction occurs after the sun comes up around 7:00 a.m. when on-line conventional generation is replaced by solar generation (producing the belly of the duck). As the sun sets starting around 4:00 p.m., and solar generation ends, the system operator must dispatch resources that can meet the most significant daily ramp (the arch of the duck’s neck). Immediately following this steep 13,000 megawatt ramp up, as demand on the system deceases into the evening hours, the system operator must reduce or shut down generation to meet the downward ramp. 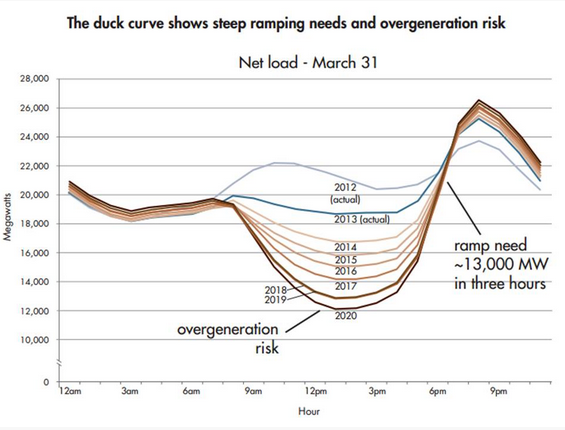 California has more than 170,000 distributed solar systems connected to the grid. Photovoltaic plants of 1 megawatt or larger are monitored and metered by the system operator; the smaller systems, which comprise nearly 90 percent of connected distributed generation capacity in California, are not. At the end of 2012, customer solar photovoltaic capacity totaled 1,785 megawatts. California has a project that is simulating the output every half hour from these photovoltaic systems so the system operator can manage its hour-by-hour power supply-demand balance.[ii]

California is not the only state that is facing the solar ‘duck curve’. Hawaii’s isolated and solar photovoltaic-rich grid is already seeing some days when non-solar demand drops below zero because of the amount of solar power being put onto the grid, which the state’s utilities and regulators have called the “Nessie curve” after the Loch Ness monster.[iii]

The chart below represents typical circuits on Hawaii’s island of Oahu, where incentives have resulted in a huge increase in distributed solar photovoltaic energy. Ten percent of the island’s customers have rooftop photovoltaic panels, totaling 29,558 systems with a nameplate generating capacity of 221 megawatts. At mid-day, rooftop solar photovoltaic energy supply exceeds the energy demand on those circuits, then a steep upward curve results as the solar energy declines and late afternoon demand increases. 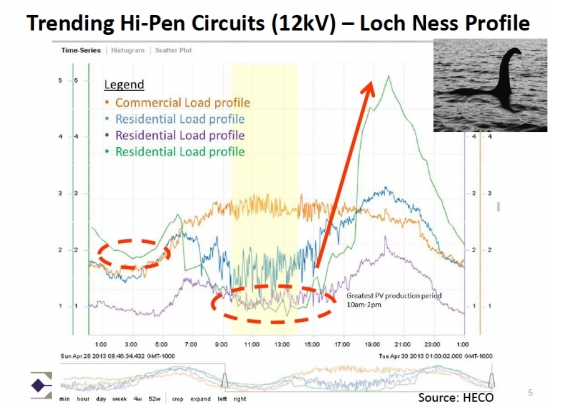 The effect that distributed solar has had on Hawaii’s load curve is demonstrated by the graph below, which tracks changes from 2010 to 2013 on an average transformer loading. On one peak day in August, the system experienced a back feed condition, not just on some individual circuits, but across the entire system. 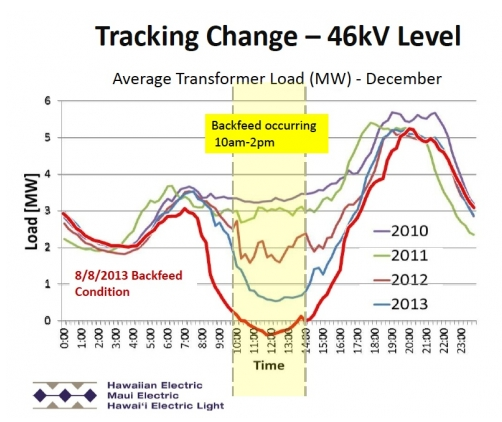 Hawaii has had to manage large penetrations of customer-owned generation, which is outside the control of the electric utility company and puts a burden on its electric grid operators. To deal with the issue, the Hawaiian electric utility company, HECO, has adopted additional interconnection requirements for its systems including small-scale rooftop solar photovoltaic systems. The utility is planning to deploy smart meters, which would provide more data to help guide day-to-day grid management decisions and is investing in weather forecasting systems and distributed energy analysis and management technology. It is also installing grid-scale battery systems, incorporating demand response, and taking other steps to manage the solar challenge.

Opposition and Solutions to the “Duck Curve’

Opponents of seeing the duck curve as a problem indicate that it assumes a worst case situation. It assumes that consumers do not adjust to prices and incentives. It does not take into account time-of-use pricing that is being rolled out in California, the energy efficiency to come from new building codes and programs, or the potential for demand response to automatically adjust household or commercial building energy use to meet the needs of the grid.

But, system operators must look at worst case scenarios to ensure proper operation of the grid 24 hours a day- 7 days a week- to provide electric customers the reliability that they are accustomed to.

Various strategies are being analyzed to deal with the situation, but they would require significant changes to the way utilities and consumers interact. For example, demand reduction and load control programs which are typically triggered only during the hottest peak summer days would need to be used during the late afternoon/early evening “ramp” times represented by the duck curve. Another strategy orients solar panels from south to west, where they would capture more late afternoon sunlight, but forego producing greater overall electric generation.[iv]

Since the federal investment tax credit is scheduled to drop from 30 percent to 10 percent at the end of 2016, a solar boom is expected in the next 2 years. With larger amounts of solar energy comes a larger problem of over generation. Some believe that curtailment of renewable generation may be necessary to manage the over generation issue. The worry is that if banks and investors think that system operators would curtail output severely, they may no longer want to take the risk of financing these projects.[v]

The advent of financial and mandated incentives for increased renewable energy has brought with it unexpected grid-related problems as intermittent renewable generation has increased to more measurable levels. California’s mandate of 33 percent of retail electricity from renewable energy by 2020 and Hawaii’s mandate of 40 percent of electricity generated from renewable sources by 2030 along with federal and state financial incentives have pushed the levels of these more expensive renewable sources where they are raising havoc with electric grid operations. The independent system operators are working on the issue so that consumers can still expect to have electricity on demand. But, it may mean changes to the way consumers use electricity or how much they pay for it to have the flexibility and reliability that they have historically enjoyed.

[i] California ISO, What the duck curve tells us about managing a green grid, http://www.caiso.com/Documents/FlexibleResourcesHelpRenewables_FastFacts.pdf

[v] Utility Dive, The ‘epic fail’ on solar’s doorstep—and how the grid can help, October 22, 2014, http://www.utilitydive.com/news/the-epic-fail-on-solars-doorstepand-how-the-grid-can-help/324411/