A study by NERA Economic Consulting estimates that the Environmental Protection Agency’s (EPA) carbon rule for existing power plants could cost at least $366 billion and that residents in 43 states would see double-digit percentage increases on average in their electricity bills over the 15-year period from 2017 to 2031.[1] Consumers and businesses would pay $41 billion or more a year, which is nearly five times the cost of all Clean Air Act rules for power plants prior to 2010. The proposed rule would prematurely shutter 45,000 megawatts of coal-fired power generation capacity—more than New England’s entire electric generating capacity—and as much as 169,000 megawatts if EPA cannot legally allow all options it specified for compliance.

But, the benefits of complying with the rule and expending these high costs on American consumers would be miniscule–only limiting global warming by 0.02 degrees and sea level rises by 0.01 inch, according to the EPA’s models.[2] The administration’s “Clean Power Plan” proposal would result in higher prices for consumers, reduced electric reliability, and would pose a serious threat to America’s economic competiveness.

EPA’s Clean Power Plan requires a 30 percent reduction in carbon dioxide emissions from power plants from 2005 levels by 2030, and establishes state-specific targets to do so. EPA’s proposal sets state carbon dioxide emission rate targets for 49 states based on four EPA “building blocks.”  Those building blocks include heat rate improvements at coal units, increased utilization of existing combined cycle natural gas units from 44 percent today to 70 percent, increases in renewable and nuclear energy, and increases in end use efficiency. The NERA analysis is based on combinations of these building blocks that states might use to comply with the EPA targets. EPA’s authority is limited to emission controls alone and therefore they seek to foist off on the States the hard work of deciding which specific groups within each state are hurt the most by the new rules. As the NERA study points out, everyone gets hurt.

The NERA study constructs two scenarios for analysis: one where all four of the building blocks mentioned above can be used to meet compliance and a second scenario that assumes that only blocks one and two can be used due to legal issues with EPA authority. In both scenarios, NERA assumes that the least cost options will be taken to meet the state targets with each state achieving its target independent of other states. NERA also used its own assumptions on cost and efficiency modifications in building blocks one and four, based on industry expertise and recent studies. In general, EPA’s assumptions were more optimistic than the studies and industry expertise that NERA used in its analysis. That is one reason why EPA’s estimate of compliance would cost only between $7.3 billion and $8.8 billion annually and would increase electricity costs only slightly in the earlier years, saving consumers money on their electric bills by the 2030 compliance deadline. The Government Accounting Office has recently questioned the objectivity and accuracy of EPA’s cost-benefit assessments.[3]

NERA projects that the costs to comply with EPA’s proposed plan could total at least $366 billion over a 15-year period for the scenario where all 4 building blocks are available and as much as $479 billion if only the first 2 building blocks were allowed. Electricity rates are expected to increase an average of 12 to 17 percent nationwide depending on the scenario, with 14 states seeing prices skyrocket over 20 percent in the second scenario that limits the availability of EPA’s building blocks.

In the first scenario, coal-fired generation would decrease by 29 percent with 45 gigawatts of coal-fired capacity retiring and natural gas generation would increase by about 5 percent with Henry Hub natural gas prices increasing by 2 percent, raising electricity prices 12 percent on average across the United States over the 15 years. Consumers would be expected to reduce energy consumption paying more than $500 billion for one of the 4 building blocks. In this scenario, Utah would see the highest percentage increase in electricity prices of 20 percent. 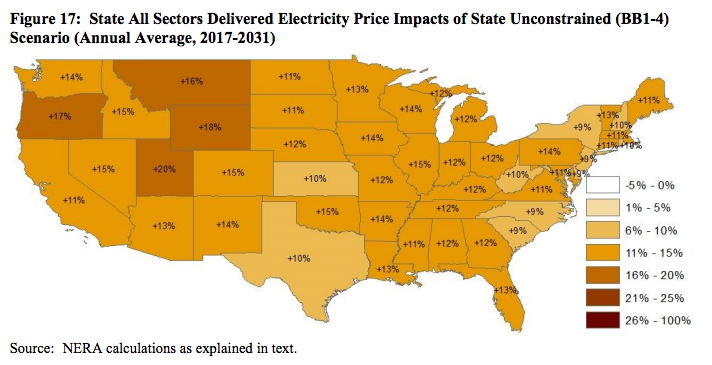 In the second scenario, 169 gigawatts of coal-fired capacity would be retired and natural gas prices would increase by 29 percent, raising electricity prices 17 percent on average in the United States. In this scenario, 5 states (Texas, Utah, Nevada, Wyoming and Illinois) would see electricity price increases on average above 26 percent. 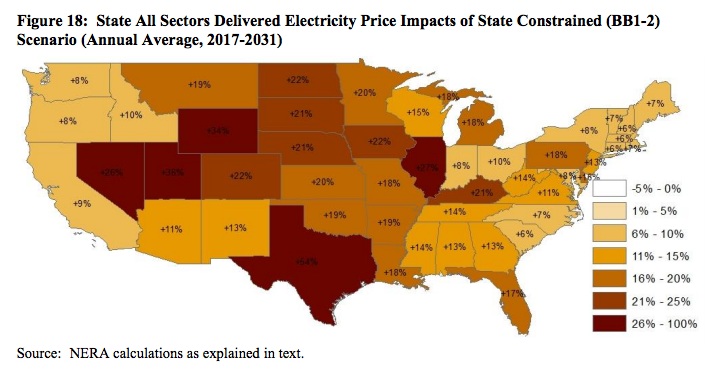 Despite these significant costs, EPA’s proposal would have a minuscule effect on global climate change:  atmospheric CO2 concentrations would be reduced by less than one-half of a percent, equating to reductions in global average temperature of less than 2/100th of a degree based upon EPA’s computer models, and sea level rise would be reduced by 1/100th of an inch—about the thickness of three sheets of paper.

EPA’s Clean Power Plan could cost consumers and businesses $41 billion or more per year, far outpacing the costs of all Clean Air Act rules for power plants in 2010 ($7 billion) and the annual cost of the Mercury and Air Toxics Standards rule ($10 billion).

EPA’s Clean Power Rule creates major questions about the reliability and affordability of electricity across the nation and does little to address the problem it seeks to solve because merely reducing fossil fuel carbon dioxide emissions without producing a measurable impact on world temperature or climate should not be regarded as a success.  EPA’s plan will affect all Americans negatively with major rate increases in electricity. As NERA’s analysis demonstrates, the rule will come at extraordinary cost to consumers including businesses, households, and individuals, particularly those living on fixed incomes or at or near the poverty level.  The rule will also have profound negative effects on electric reliability and will threaten to idle America’s manufacturing renaissance.