Coal production in 2011 was at a three year high and coal exports were at a level not seen in a decade.  While the United States government is doing all it can to reduce U.S. consumption of coal in electric generation through environmental regulations, other countries are using coal to energize their economies and are turning to the United States for its vast coal resources, the largest in the world.

Renewable production in 2011 was at its highest level ever, led by hydroelectric production that increased 25 percent from 2010 levels and was at its highest level since 1999 as a result of precipitation and run-off in the Western United States. In the electric generation sector, hydroelectric production was followed by biomass generation and wind generation, respectively, as the second and third largest renewable forms of electric generation. However, biofuels production (ethanol, biodiesel) exceeded that of wind energy in the production pecking order. Mandates and financial incentives have helped to increase biofuels and wind energy production. However, some of these financial incentives expired at the end of 2011 including the subsidy on ethanol and the 1603 program that provided 30 percent of the investment cost in qualified renewable energy technologies as rebates to developers. 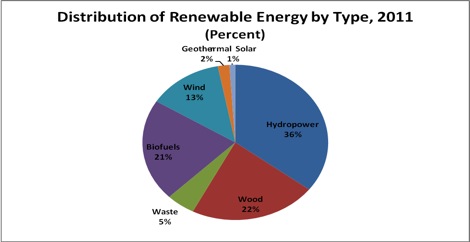 While prices for oil and gasoline are creeping up and nearing their all time peak, natural gas prices have dived due to the glut of natural gas in this country. Natural gas wellhead prices averaged $3.95 per thousand cubic feet in 2011, 12 percent below their 2010 average, helping natural gas increase its footing in the electric generation market with a 25 percent share in 2011, its largest ever.  The glut of natural gas was the result of a mild winter and production boom that has pushed down its futures price to around $2 per thousand cubic feet after peaking at $4.85 last summer.[i] 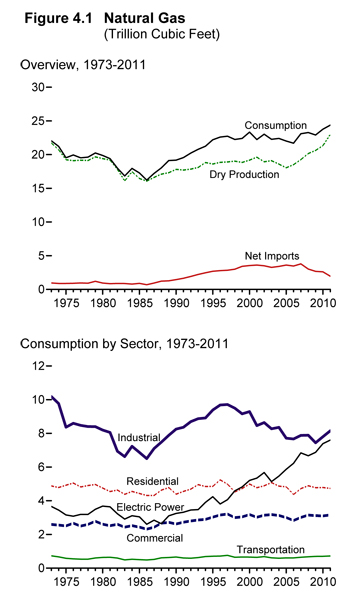 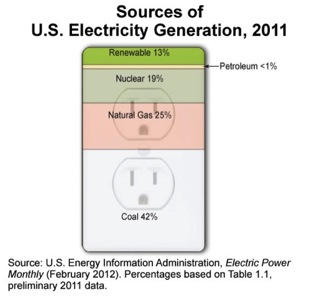 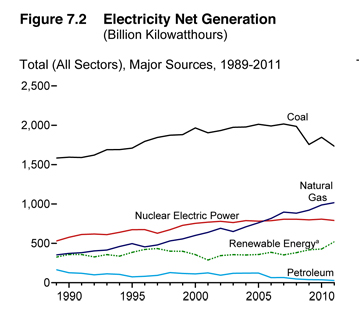 Despite massive subsidies and government-guaranteed markets for wind, solar, ethanol, and other politically-favored energy sources, oil, coal, and natural gas production all increased in the United States in 2011. Not only that, but oil, coal, and natural gas provided the lion’s share of the energy we consumed. Hopefully, governments will stop trying to pick winners and losers in the energy market and let American choose their energy source for themselves.