The Energy Information Administration (EIA) released its Annual Energy Outlook for 2012 (AEO) this week. The AEO updates EIA’s reference case forecasts for regulatory changes and data changes that have occurred since it released its earlier version at the beginning of this year. The full outlook also contains 29 sensitivity cases that examine changes to the reference case assumptions to highlight the uncertainty that exists in projecting the energy future for the next 25 years.[i] In the updated reference case, the nation’s future looks roughly the same as it did in the early release version that IER summarized here.

According to EIA, by 2020, nearly half of the crude oil the United States consumes will be produced at home, and 82 percent is expected to come from this side of the Atlantic. Government forecasters expect that U.S. petroleum purchases from the Middle East, Africa, and Europe will fall to about 2.5 million barrels a day by 2020, from more than 4 million barrels today. Oil imports from the Persian Gulf’s OPEC members are expected to drop to 860,000 barrels a day in 2020—about half of their current level. Even OPEC predicts that oil shipments from the Middle East to North America “could almost be nonexistent” by 2035.[ii] 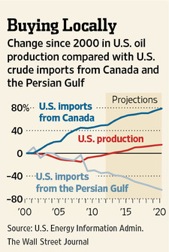 EIA’s estimates are backed up by data from IHS Cambridge Energy Research Associates (IHS CERA). IHS CERA calculates that between 2003 and 2011, oil and gas investments nearly quadrupled in the Western Hemisphere. Due to greater political stability in the Americas, 48 percent of global oil investment ($320 billion) occurred here in 2011, compared to 39 percent in 2003.

North Dakota surpassed Alaska earlier this year to become the nation’s second largest state oil producer, exceeded only by Texas. North Dakota developed its Bakken Shale formation through the use of hydraulic fracturing and horizontal drilling technology. Average U.S. daily production of crude oil increased 6 percent between October 2011 and March 2012 spurred by production of shale oil from the Bakken and the Eagle Ford shale formation in Texas. In November 2011, U.S. oil production was over 6 million barrels per day for the first time since 1998. 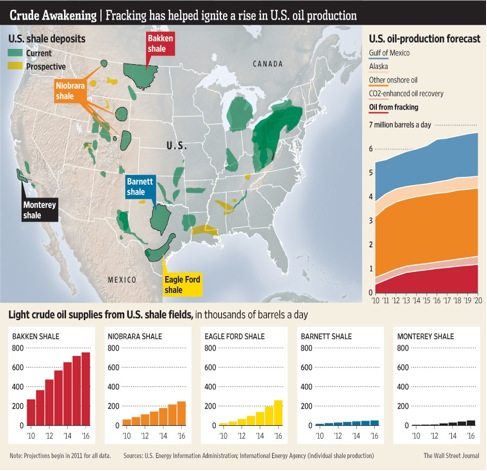 Alaska’s oil production is expected to continue its decline unless new federal areas are opened for development. EIA expects its production to decline by 55 percent from 2010 to 2035, from 600,000 barrels per day in 2010 to 270,000 barrels per day in 2035. The problem with declining Alaskan production is the feasibility of maintaining the Trans-Alaska Pipeline System (TAPS), an 800-mile pipeline that transports crude from the North Slope to a marine terminal in Valdez, from which tankers are used to transport the crude to West Coast refineries. TAPS is currently the only means of transporting North Slope crude oil. The pipeline was reconfigured and refurbished from 2004 to 2006 to permit it to operate at lower than designed flow rates, costing $400 to $500 million, with minimum flow expected to be at 200,000 barrels per day,  just below the 2035 EIA forecasted production level in its reference case. However, in its Low Oil Price Case, North Slope oil production levels decline sufficiently as to close TAPS. Engineers indicate that problems may start to occur on the pipeline with flows below 550,000 barrels per day and severe operational problems are expected to occur at 350,000 barrels a day, requiring significant investment in the pipeline.

EIA expects that U.S. refineries will continue the trend begun last year of being a net exporter of refined petroleum products due to abundant crude oil supplies, a large refining base and decreasing domestic demand.

Coal-fired capacity retirements are concentrated in two North American Reliability Council regions: the southeast (SERC Reliability Corporation) and most of the Mid-Atlantic and Ohio Valley region (the Reliability First Corporation (RFC)). These two regions (SERC and RFC) accounted for 65 percent of all U.S. coal-fired generating capacity in 2010, and 43 percent of the plants do not have flue gas desulfurization units installed. The coal plants in these regions are primarily fueled by bituminous coal, generally the most expensive of the coal types.

The natural gas share of electric power generation is expected to increase from 25 percent in 2011 to 28 percent in 2035 due to lower capital costs for natural gas fired capacity and relatively low natural gas prices due to hydraulic fracturing that enables production of abundant U.S. shale gas resources.

EIA looked at a sensitivity case where renewable tax incentives did not sunset. In this case, renewable energy represents about 20 percent of electricity generation in 2035, up from 15 percent in the reference case. In this sensitivity case, extension of the production tax credit and the 30-percent investment tax credit results in average reductions in Government tax revenues of approximately $2.5 billion per year between 2011 and 2035, compared to $520 million per year in the reference case.

Fossil fuels will still dominate the future energy picture at least through 2035, according to EIA. While renewable energy is expected to increase its share of electric generation, it will still remain a small portion of total generation over the next 25 years. And even if tax incentives for renewable technologies were to be extended, renewable generation would still garner less than a 20 percent share of generation in 2035.

Clearly, this AEO indicates that attention is needed regarding the Trans-Alaskan Pipeline System to circumvent its potential demise and regarding the new EPA regulations affecting the coal industry, in which a large number of coal-fired plants could be forced to retire, losing some of our ability to use affordable coal in the future.