Cape Wind, off the coast of Cape Cod, Massachusetts is in trouble trying to find buyers for its high cost electricity. But Cape Wind isn’t the only offshore wind project in dire straits. Now, an offshore wind project 13 miles off the Delaware coast is in jeopardy because of possible federal 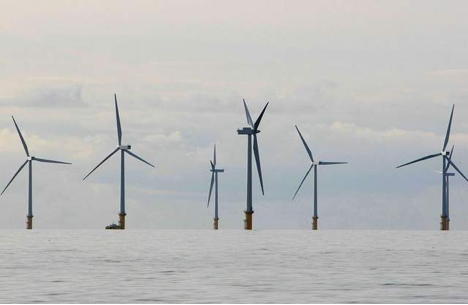 NRG Bluewater Wind is planning to build 49 to 150 wind turbines 13 miles off the coast of Delaware to generate electricity for Delaware and Maryland customers by 2016. Three years ago, Bluewater Wind signed a 25 year contract with Delmarva Power to produce electricity to power about 54,000 homes. Delmarva Power needs to meet a renewable energy standard of 25 percent of generation by 2025. Though the Bluewater contract with Delmarva was not contingent on federal loan guarantees, the project’s hold up is connected to two renewable loan programs that are being cut as part of the compromise that avoided a recent government shut down. Also causing some angst is the fact that the federal subsidies for wind expire at the end of this year or the end of next year, depending on the subsidy. Although the production tax credit for wind generation has been extended repeatedly, the timing of the extensions has not always been commensurate with the expiration of the previous credit. Without the subsidies, wind generation cannot compete against natural gas and coal fired generation.

If Bluewater walks away from the project by June 23, it would lose $2 million. However, to continue with the project will require Bluewater to pay $6 million to Delmarva Power in the near future, putting the company in a near term dilemma.  Besides its contract with Delmarva Power, Bluewater has small purchase commitments with municipal utilities in Maryland and Delaware, but could not get enough buyers to enlarge the size of the wind farm to improve its viability. That’s a similar fate to Cape Wind, an offshore wind farm off of Cape Cod that may need to cut back its planned size due to its inability of finding sufficient customers to pay for its high price electricity.  Massachusetts utilities are able to meet their renewable energy commitments far cheaper with onshore wind than offshore wind.

The Cost of Offshore Wind Generation

The per  kilowatt cost of construction of the offshore wind unit used by EIA is verified by the estimated cost of the Cape Wind project, off the coast of Massachusetts. This wind farm is estimated to cost $2.5 billion, and would consist of 130 3.6 megawatt turbines if customers are found for all of the project’s output. The Massachusetts Department of Public Utilities is to buy half of Cape Wind’s power, which will start at a cost of 18.7 cents per kilowatt hour, and increase annually at 3.5 percent in a 15 year deal.  That is about twice what the utility pays for power from conventional sources, and almost twice the average U.S. cost of electricity—9.9 cents per kilowatt in 2010.  The other major Massachusetts utility, NSTAR, feels that it is imprudent to buy power at this cost and is opting to purchase onshore wind-generated electricity to meet its renewable standard of 15 percent renewable generation by 2020. NSTAR has a 10-year contract with TransCanada for onshore wind at 10.5 cents per kilowatt hour, about 6 percent higher than the average U.S. price of electricity, but significantly less (44 percent less) than the starting price of Cape Wind.

While the Department of Interior wants to push offshore renewable development, the reality is that its cost is way too high for a prudent investment without significant government intervention. Cape Wind off the coast of Massachusetts is having trouble finding buyers for its electricity,  Bluewater Wind is having doubts about proceeding off the coast of Delaware due to cutbacks in the federal renewable energy loan program, and utilities in Georgia have determined that the costs are just too high. And, the costs are very high. According to the EIA, on a generation basis, offshore wind is second to solar thermal as the highest cost technology in a slate of about 20 technologies. The question for Americans is: “How high a price are you willing to pay for renewable generation?”