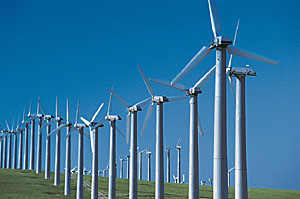 Because wind does not blow all the time, wind power is an “intermittent” technology that needs other power as back-up to ensure that the lights stay on. Currently, wind capacity is backed up by existing fossil fuel capacity (natural gas or coal), but Britain has determined that it will need an additional 17 natural-gas powered plants to keep the lights on by 2020. The generators that will be used when the wind does not blow will cost UK consumers 10 billion pounds.[i] To cover the cost of this additional standby capacity, the utility companies are asking for capacity payments that will be charged year round. In other words, consumers will need to pay for the heavily subsidized wind power and then pay again for capacity built to back-up wind in order to keep the electricity on. The back-up units will be needed by 2020 when Britain expects to get almost one-third of its electricity generation from renewable energy, mainly windpower. Also by 2020, most of Britain’s nuclear plants, old gas-fired plants and coal-fired power plants are planned to be closed, providing a 30 percent energy gap that new nuclear and wind power units are expected to fill.[ii]

As one analyst indicates the British “Government’s obsession with wind turbines is one of the greatest political blunders of our time.” Britain is committed to generate nearly a third of its electricity from renewable sources by the end of the decade based on an agreement with the European Union to reduce greenhouse gas emissions. He notes that:

The later point above brings up the issue of cycling where natural gas and coal-fired generators are ramped up or down to coincide with the varying generation from wind turbines. Because these fossil fuel technologies can be base-load power, they are run most efficiently at a steady load. When they are forced to increase or decrease their load to accommodate the changes in wind output, which can occur minute by minute, their efficiency is reduced dramatically. The ramping up and down of these generators results in more fuel burned than when they operate in steady state, resulting in more carbon dioxide emissions.[iv] Some liken this phenomenon to stop-and-go traffic that results in more motor fuel consumed on the highway than when the vehicle is operated at a steady speed. Generally the carbon savings claimed due to generation from wind power does not take into account this concept of cycling.

Work of Dutch scientists suggests that these efficiency losses may result in wind energy causing increased fossil fuel use and carbon dioxide emissions. Some believe that more carbon emissions would be saved if all wind turbines were to be shut down and replaced by the back-up fossil fuel stations operating in their most efficient state.[v]

Thus, it is not very surprising that there is opposition to building wind farms in Britain and that not all proposals have been successful. Some recent ones follow:

Wind power is an intermittent electricity generation power source that requires back-up power from fossil burning facilities when the wind does not blow or freezing temperatures, as was the case in Britain last December, result in their not being able to generate power. So far, wind developers have been able to construct their wind farms without having to deal with the need for back-up power because sufficient fossil fuel generating power exists. However, it has been determined in Britain, that their goal of almost one-third renewable generation, mostly wind power, by 2020 cannot be met without an additional 17 natural gas-fired plants as back-up power.

The power companies that will need to build those plants and run them on standby want a capacity payment to pay for the cost of those units. So, taxpayers and consumers will be paying for the wind power, their subsidies, and the standby power that is needed to keep the lights on. And, some believe there is no net gain in emissions because the ramping up and down of the fossil fuel plants causes more fuel to be burned and more carbon dioxide to be emitted than running the fossil units in steady state.

How long will it take for politicians to get wise to wind power?

[vii] This is Devon, Relief for campaigners as controversial wind farm is rejected, June 23, 2011, http://www.thisisdevon.co.uk/Relief-campaigners-controversial-wind-farm/story-12818321-detail/story.html

[viii] The Telegraph, Wind farm forced to close because of complaints over the noise, July 6, 2011, http://www.telegraph.co.uk/earth/environment/8579747/Wind-farm-forced-to-close-after-complaints-over-the-noise.html