On Thursday, June 23 the Obama Administration, in conjunction with other governments, announced the release of 60 million barrels of oil from their strategic reserves over the next month. The ostensible purpose of the release was to reduce oil prices and ease gasoline prices for American motorists as we head into peak traveling season.

Although the surprise announcement did lead to an immediate drop in the price of crude, the fall was not as much as some might have expected and prices returned to the pre-release levels within 1 week. Economic theory can explain why. Moreover, to the extent that the Obama Administration recognizes that more oil leads to lower prices, it should tap into America’s vast “reserves” located in the Outer Continental Shelf and ANWR. These holdings dwarf the salt caverns of the SPR and tapping them would lead to a real increase in production as opposed to a short-term band-aid “fix.”

SPR Drawdowns and the Price of Oil

As this CNNMoney article reports, the surprise announcement, which added two million barrels a day to the market, caused the price of oil to drop more than 4 percent by the close of the day. (Interestingly, as of this writing—exactly one week later—the world price of oil is higher than it was before the announcement.) 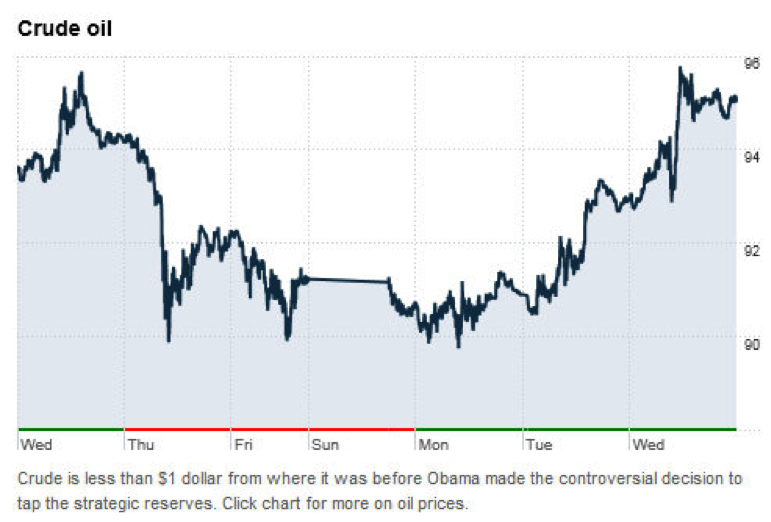 As I have written previously on this blog, economic theory suggests that one-shot sales from the Strategic Petroleum Reserve under normal market conditions would be offset by the response of other players in the market, so that releasing oil from the SPR wouldn’t depress prices as much as one might have originally thought.

Here’s a summary of the argument: People who are sitting on large deposits of oil (the Saudis for example) set their current production rates to maximize the market value of their asset. If a producer extracts and sells more barrels of oil today, he earns more revenue today, but his actions (a) push down the current market price of oil, while (b) leave him with fewer barrels of oil to sell in the future, and therefore also (c) push up the future market price of oil.

Because of reasoning like this, we don’t need to worry about all the major oil producers foolishly selling every last barrel of oil this year. That would be a horrible business strategy, because it would crash the current price of oil while leading to $500-a-barrel oil next year. Since the owners of major oil fields are anything but stupid, they plan their operations out decades into the future. Rather, they decide on current production rates in order to maximize the long-run profitability of their operations.

So if the world oil market were more or less in equilibrium, what effect did the surprise announcement have? All of a sudden, it meant that two million more barrels of oil per day would be coming onto the market, than the major oil producers had previously forecast. That in turn means that the market price of oil in July will be lower (other things equal) than what the major oil producers had anticipated, before hearing the announcement.

Because of the changed circumstances, the original production plans are no longer optimal. Major producers could make more money (in light of the surprise SPR sales) if they reduced their output over the summer months, and deferred the extraction and sale of more of their inventory to the future, after the SPR drawdowns have finished. Even if the total amount of oil hitting the market remained above the original level, private speculators (sensing the prices were artificially low) would have the incentive to buy the excess oil and store it, waiting for prices to return to their normal levels.

If there were no real-world frictions, in principle the SPR announcements would have virtually no effect on oil prices at all. The extra two million barrels coming onto the market from the SPR sales would be perfectly offset by a combination of production cutbacks and private inventory accumulation. Effectively, the Obama Administration would have simply transferred 30 million barrels of its inventories from salt caverns in the southern United States, into the warehouses of private speculators and into the possession of Saudi Arabia in deposits buried under the sand.

Of course, in the real world, there are all sorts of complications with this theoretical benchmark. Oil prices really did drop upon the announcement. But the point remains that economic forces limit the lasting impact that even large-scale inventory sales can have on the world price of crude.

Getting a Bigger Bang

Since the Obama Administration apparently understands the (obvious) point that more oil leads to lower prices, it should heed IER’s long-standing call to remove the statutory and regulatory obstacle to the development of offshore, ANWR, and other oil resources. Whereas the SPR had (before the recent announcement) 726.5 million barrels of oil, the “1002 Area” of ANWR has an estimated 10.4 billion barrels of technically recoverable crude, while the figure for the OCS is more than 59 billion barrels. Thus there are about 96 times more oil “reserves” in ANWR and the OCS, than is contained in the SPR.

What’s even more interesting is that the conventional criticism of expanded domestic production—that it will take years to bring that new oil to the market—turns the economic logic above on its head. Suppose Saudi Arabia has made long-term planning decisions under the assumption that the roughly 70 billion barrels of U.S. crude will remain forever locked-up due to federal barriers. Then the U.S. government surprises everyone by announcing that this oil will actually be coming onto the market in a few years. Saudi officials would realize that their original forecast of the world price of oil over the next few decades was overly optimistic (i.e. too high), and they would rearrange their plans to extract more oil in the present before having to compete with the new U.S. production. This would cause more oil to hit the market in the present, thus lowering the present price of oil—even though the promised U.S. production might be years in the future.

Although our economistic reasoning sounds Ivory Tower, we have real-world evidence: When President George W. Bush announced in the summer of 2008 that he was ending the executive branch’s moratorium on offshore drilling, the price of crude dropped $9 per barrel during the speech itself. This was an immediate impact at least as great as the immediate drop in crude prices, following the recent SPR announcement. Yet Bush’s announcement by itself didn’t guarantee a single drop in new production, because the Congressional moratorium was still in place. Just the increased possibility of more future U.S. production, caused prices to drop as much as Obama et al.’s guaranteed delivery of 60 million barrels in the next month.

President Obama and his advisors undoubtedly recognize that Americans are seething over soaring energy and other prices. The drawdown in the SPR did push down prices (at least temporarily), but economic theory suggests that other forces would largely offset its impact. In both theory and practice, we know that opening up domestic energy resources to development would cause much bigger and lasting reductions in the price of energy, not to mention providing economic growth.