First, hydraulic fracturing gave the United States a boom in shale gas that lowered natural gas prices by 54 percent between 2008 and 2009. Now, shale oil discoveries are being made that can substantially increase onshore oil production. The Bakken oil field located in western North Dakota, northeast Montana, and Canada’s Saskatchewan Province is pumping 225,000 barrels of oil a day today that started at just 3,000 barrels per day in 2005, with estimates of a million barrels of oil production per day by 2020.[i] A newer shale oil field, Eagle Ford in Texas,  is one of about 20 new onshore oil fields so far that combined could increase the oil output of the United States by 25 percent within 10 years.  Those statistics, of course, assume that the U.S. government does not intervene in state regulation of hydraulic fracturing, and that it can continue to be used to stimulate the wells. Hydraulic fracturing requires water, sand, and a small amount of chemicals to break up the shale deposits to allow oil or natural gas to flow through horizontal drilling. But, while the government gave hydraulic fracturing a clean bill of health in 2004 and there has never been a documented case of ground water contamination owing to hydraulic fracturing, the Environmental Protection Agency, the Department of Interior and the Department of Energy – at the direction of President Obama – are all conducting studies on the issue. 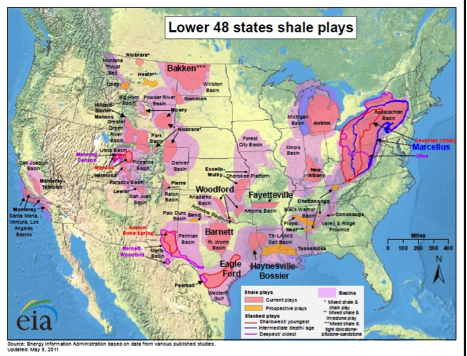 North Dakota State University estimates that the shale oil workforce in the state jumped from just over 5,000 in 2005 to over 18,000 in 2009 and estimates now have it at 30,000. If oil production reaches a million barrels a day, it could employ over 100,000 people. Due to this oil boom,  unemployment in North Dakota fell to 3.8 percent — less than half the national rate of 9 percent- and the lowest unemployment rate in the United States.

A Texas field, known as the Eagle Ford, is one of about 20 onshore oil fields that could together increase the nation’s oil output by 25 percent within a decade. The Eagle Ford field is producing more than 100,000 barrels a day and could reach 420,000 by 2015, according to Bentek Energy. In Dimmit County, Texas, the unemployment rate has fallen to half, and sales tax receipts are up 70 percent. 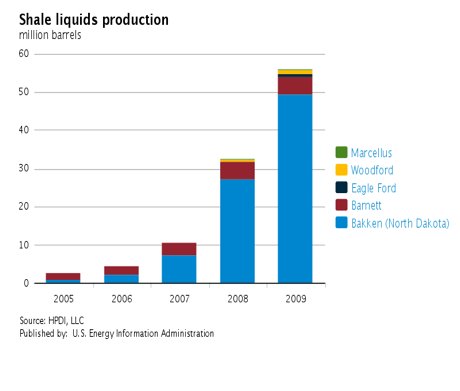 It is estimated that these shale oil fields could create more than two million new jobs and that tens of billions of dollars could line the coffers of states where shale oil fields are located, including Texas, Oklahoma, Colorado, California, Ohio, Michigan and Kansas. According to IHS CERA, an energy research firm, shale and other “tight rock” fields  currently producing about half a million barrels of oil a day could produce up to three million barrels a day by 2020. In 2011 alone, oil companies are investing an estimated $25 billion to drill 5,000 new oil wells in tight rock fields.[iv]

According to oil companies, oil shale is economic as long as oil prices remain above $60 a barrel. At oil prices around $100 a barrel, shale oil wells can generally return a profit within eight months — three times faster than many conventional oil wells.

Some analysts predict that within 10 years, shale oil production could help reduce oil imports by more than half as long as other actions are also realized in increasing oil production in the Gulf of Mexico and in reducing oil demand. Significant finds in Alaska could accelerate this reduction in imports, as could unconventional sources of oil and byproducts of natural gas production.  At oil prices around $90 per barrel, reducing imports could save the United States as much as $175 billion a year. Last year, when oil averaged $78 per barrel, the United States spent $260 billion for imported crude, more than half the country’s $500 billion trade deficit.[v]

A national campaign against hydraulic fracturing has been announced by some groups, and it has come under attack by certain journalists, including one with the New York Times, which prompted the non-partisan Energy Information Administration to issue an extremely rare rebuttal to a story which mischaracterized their analysis of natural gas resources in the United States.   Clearly, hydraulic fracturing, which is increasing our domestic oil and natural gas production, is under political attack.

Some environmentalists claim hydro fracturing pollutes drinking water even though industry experts say that it is unlikely because hydro fracturing is performed thousands of feet below the water table.   Environmental Protection Agency administrator Lisa Jackson recently told Congress she knows of no proven examples of such water pollution.[vi] But, the EPA has launched “a comprehensive research study” on the possible “adverse impact that hydraulic fracturing may have on water quality and public health” nationwide.[vii]

Additionally, environmentalists are questioning the chemicals injected in the water during hydro fracturing, believing that they may be harmful. A bill introduced in the Texas legislature is requiring drillers to disclose the chemicals they consume in the hydro fracturing process. Similarly, thoughts of such disclosure have occurred at the federal level and in other states. For example, New York, which has huge shale gas deposits, has a moratorium on hydraulic fracturing.

And, in Texas, the dunes sagebrush lizard may be named a new endangered species making some oil drillers fear that it could slow down or halt drilling in West Texas.

Shale oil may be following in the footsteps of shale gas now that hydro fracturing is being used to produce shale oil, bringing jobs and money to states with those resources. And those job figures are large, not the small numbers that the Obama Administration has garnered from the green technology movement that has done little to change the unemployment rate in this country despite the Administration’s stimulus spending.[viii]

As Robert Bryce stated in his Wall Street Journal editorial, “A vibrant industrial base requires cheap, abundant and reliable sources of energy. The shale revolution now underway is the best news for North American energy since the discovery of the East Texas Field in 1930. We can’t afford to let fear of a proven technology stop the much-needed resurgence of American industry.”[ix]

And, as Michael Lind stated, “If gas hydrates as well as shale gas, tight oil, oil sands and other unconventional sources can be tapped at reasonable cost, then the global energy picture looks radically different than it did only a few years ago. Suddenly it appears that there may be enough accessible hydrocarbons to power industrial civilization for centuries, if not millennia, to come.”[x]