By 2014, the European Union had spent over a trillion dollars on large scale renewable energy. Yet, that investment has provided little in terms of generating capacity and output. Out of about a total of 1000 gigawatts in the European Union at the end of 2014, renewable capacity totaled just 216 gigawatts.[i] Germany, for example, invested 427 billion Euros ($467 billion) on renewable energy, installing more renewable energy capacity than any other country in Europe (78.7 gigawatts through 2014), but still relies on coal for about 42 percent of its power.[ii] According to the BP Statistical Review of World Energy, Germany’s carbon dioxide emissions increased in 2015 by 0.8 percent.[iii] The country blames the increase in 2015 on cold weather and vehicle emissions.

The 1.1 trillion Euros that the European Union spent on large scale renewable energy through 2014 is distributed among a number of countries as shown in the following figure. The countries with the highest percent shares are as follows: Germany (38 percent), Italy (14 percent), Spain (10 percent) and the United Kingdom (10 percent). 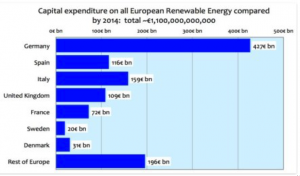 The capital expenditures that each country spent on solar photovoltaic (PV) and wind, onshore and offshore, are shown in the following figure. Germany and Italy have spent a greater share of their renewable investment on solar PV, while Spain and the United Kingdom have spent more on wind. 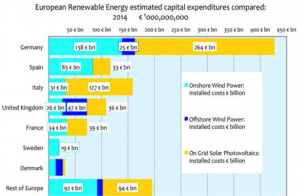 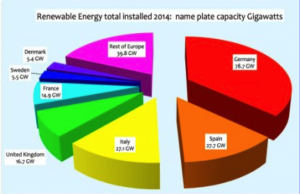 Though 216 gigawatts of renewable capacity was on-line in Europe through 2014, the output effectiveness was measured at only 38 gigawatts, yielding an effective capacity factor of only 18 percent, which compares to 87 percent for natural gas-fired capacity. In other words, natural gas power in Europe is five times more efficient than wind and solar power. When taking the low capacity factor for wind and solar into account, Europeans are paying over $29 billion Euros per gigawatt of renewable capacity (rather than the $5 billion Euros per gigawatt noted above).

The following figure indicates that the effective capacity factors differ by country, ranging from a low of 13 percent for Germany to over 25 percent for Denmark. The variation in capacity factor among the seven countries is due to the amount of solar vs. wind power since wind’s capacity factor is about half that of solar, and the country’s location since solar power is significantly less effective in Northern Europe. Nevertheless, as shown in the figure, these combined capacity factors for wind and solar are far less than those for the dispatchable technologies—natural gas, coal, and nuclear. 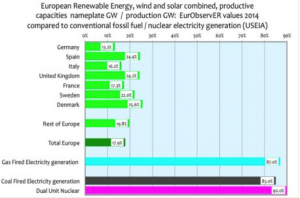 Taking capacity factors into account, the actual electricity output generated compared to the nameplate installed capacity is shown below by country. 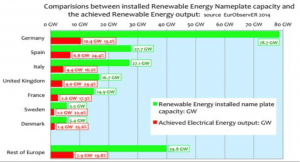 Through 2014, about 1 trillion Euros have been spent on wind and solar technologies for electricity generation in Europe. In most countries, the investment was obtained by levying extra costs on utility bills. This is essentially a regressive tax because poorer people are least able to afford the additional cost compared to wealthier people. It also burdens European industries with large energy costs, making them less competitive compared to their non-European counterparts. These regressive “green taxes” have resulted in more Europeans in fuel poverty and businesses moving offshore.

As a means of producing useful electrical power, wind and solar are very expensive generating technologies because of their low capacity factors and because of their non-dispatchability and intermittency.