In President Obama’s climate speech recently he noted that during his time in office “wind and solar electricity production has doubled” and should play a major role in the future energy mix of the country.  While the implication was that renewable growth is greater that oil and gas, a closer look at the relative growth in actual energy produced reveals a much different reality. In fact, oil and natural gas energy production is increasing much faster than wind and solar.

Since Obama took office, wind production has grown by 299 percent and solar/PV has grown 209 percent.[1] These percentage increases are impressive, but that’s because they produce a relatively small amount of energy. When compared with the energy produced by oil and gas in that time, wind and solar proves it has a ways to go to demonstrate its relevance in the energy industry. 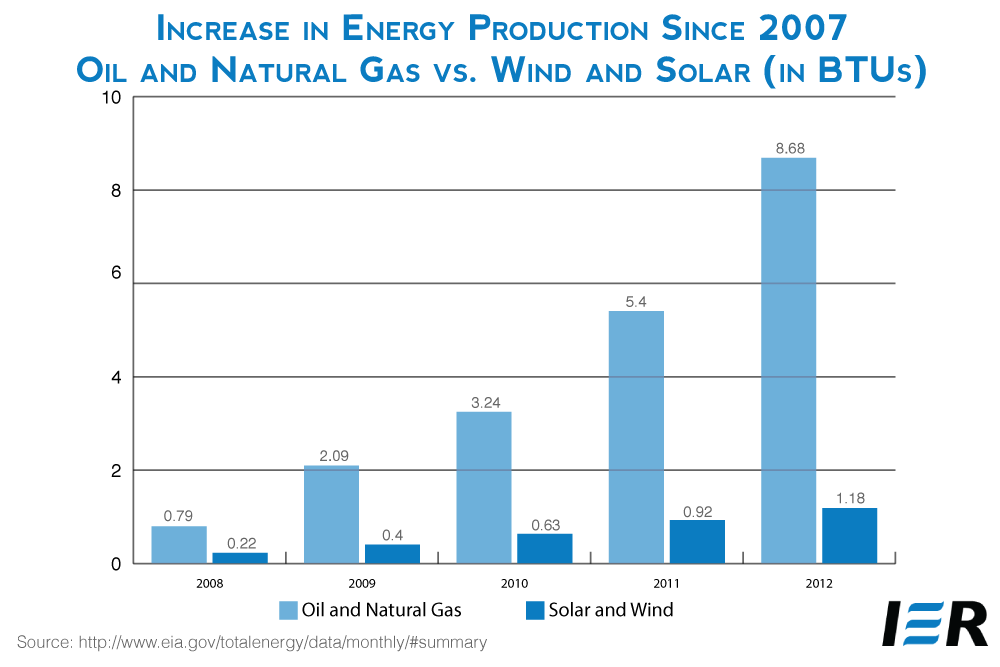 Not only is the amount of energy produced by natural gas and oil increasing much faster than wind and solar, but this increase in solar and wind is unsustainable. The recent increase is a result of over $60 billion dollars of government subsidies, direct investment and tax incentives given to these renewables.[2] [3]The environmental lobby claims that this recent growth to the natural gas and oil industries was only possible because of large amounts of government backing. This is false.

The Breakthrough Institute produced a report highlighting the government’s role in developing hydraulic fracturing and the expansion of the natural gas industry. Alex Trembath, a researcher who worked on that report, estimated that the federal government invested $137 million in research and development for the natural gas sector over a 30-year span.[4]

Federal support for natural gas in relation to the wind and solar industries proves to be a misleading comparison.  While, according to Trambath, natural gas enjoyed just $137 million of government investment over three decades, 2010 alone saw the solar industry receive $496 million and wind $3.5 billion in direct expenditure federal dollars, along with the pair enjoying over $500 million for research and development.[5] When total 2010 subsidies (direct expenditures and tax benefits) between industries are compared based on energy production, wind’s government support of 5.6 cents per kwh is more than 85 times that of oil and gas combined while solar subsidies enjoy over 1000 times the support.[6]

Lately much of the focus in the energy discussion has been centered on the growth and development of renewables while little notice has been given to the truly impressive growth of the U.S. in total oil production. “Total Oil” calculations include both oil and Natural Gas Plant Liquids (NGPL) and between 2008-2012 the U.S. has increased production by 2.66 million barrels per day, bringing total U.S. production to 11.1 million barrels per day.  That increase alone equates to more oil than the total production of Brazil, Venezuela, Algeria or Qatar.  Put another way, the increase of U.S. production in the last four years is equivalent to the total production of five Ecuador’s, an OPEC member country.[7] 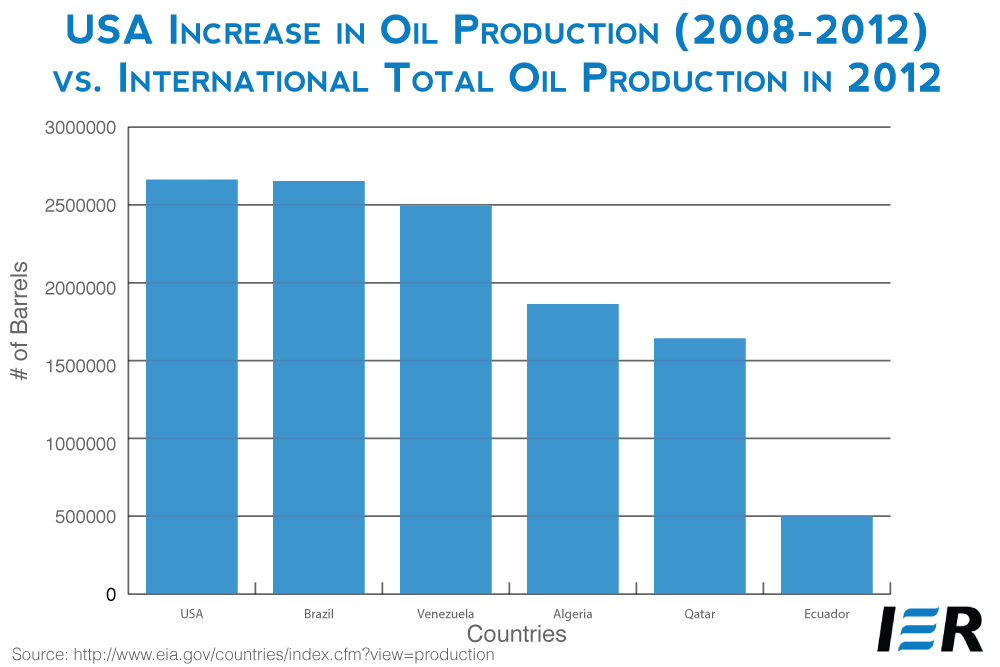 As the President sets out to enact his energy plan, it is essential for policy makers, taxpayers, and industry leaders to recognize the limitations of the green revolution and to simultaneously acknowledge the magnitude of the oil and gas renaissance taking place in the country.  Understanding this relationship will lead to lower energy costs for consumers and greater economic growth nationwide. Recognizing the relative effect future policies will have on our energy security, economy and international relations is critical for America to realize fully its new found status as a world power in energy production.

[3] Grant and loan information on wind and solar gathered from www.energysubsidies.org

Iowa: An Energy and Economic Analysis