Iowa does not produce oil and natural gas, but instead imports oil and gas supplies from Canada and other states. The same is true for the coal that supplies the state’s coal-fired generating units, which comes primarily from Wyoming.  Iowa is rich in renewable energy potential in both wind power and biofuels production. The state leads the nation in production of both corn and ethanol made from corn. Its wind power potential places the state among the leading wind producers in the nation. Iowa’s industrial sector leads the state’s energy consumption. Because Iowa’s population is low and its economy is relatively energy intensive, its per-capita energy consumption is the fifth highest in the nation. 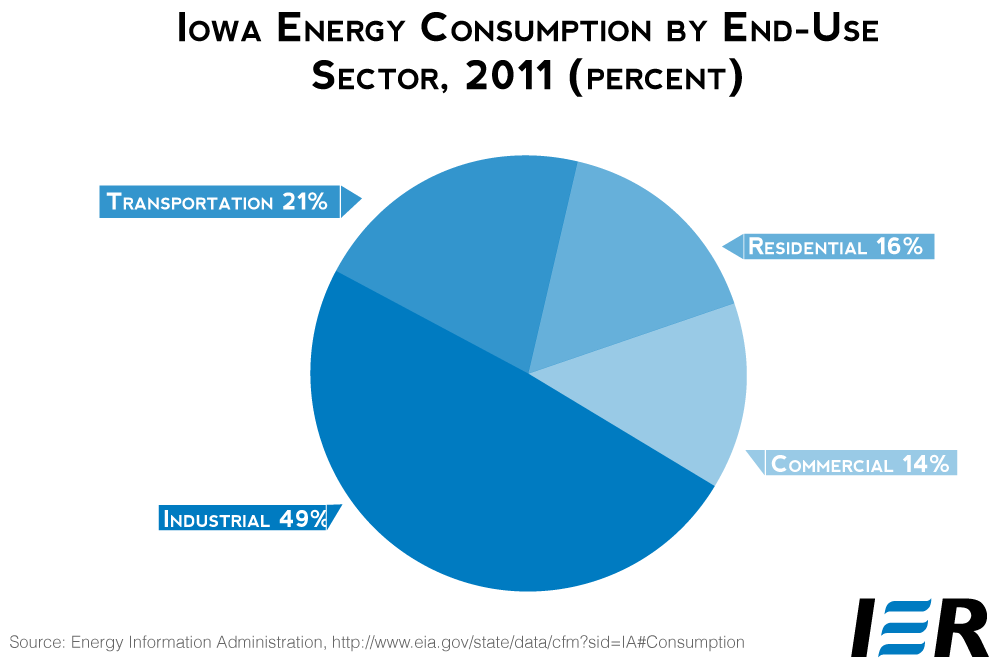 Natural Gas Iowa does not produce natural gas. The majority of Iowa’s natural gas is supplied by pipeline from Canada via Minnesota and from the Texas and Oklahoma panhandle area that extend to other Midwestern U.S. consumption markets.  Iowa ships about 70 percent of the natural gas it receives to Illinois. Natural gas supplies about one-fifth of the State’s energy demand. The industrial sector is the leading natural gas-consuming sector. Almost two-thirds of Iowan households use natural gas as their main source of energy for home heating. Natural gas is also used to generate electricity and to make fertilizer products such as anhydrous ammonia. Petroleum Iowa does not produce oil and must rely on petroleum products brought in by pipeline from other states. Total petroleum consumption in Iowa is low and is led by the transportation sector. The state ranks disproportionately high in liquefied petroleum gas (LPG) consumption, due to its heavy use for agricultural purposes and for residential heating. Almost 14 percent of Iowan homes are heated primary with LPG. Iowa grows the most corn of any state in the nation, and has for almost 2 decades. In fact, in an average year, Iowa produces more corn than most countries. In 2012, Iowa produced almost 1.88 billion bushels of corn on 13.7 million acres of land, and is projected to exceed that production level in 2013. It is also the leading producer of ethanol, accounting for over one-fourth of the nation’s ethanol capacity.  Iowa has 41 ethanol plants, with a capacity of 3,848 million gallons per year.  Iowa has no refineries and delivers much of its ethanol to U.S. fuel markets that require motor gasoline blended with ethanol. Ethanol is currently transported by tanker, truck, or rail. A proposed 1,800-mile pipeline, if built, could deliver ethanol from South Dakota, Iowa, Minnesota, Illinois, Indiana, and Ohio to distribution terminals in the northeastern United States. The main problems related to the shipment of ethanol by pipeline are its high oxygen content, which makes it corrosive, and the absorption of water and impurities in pipelines. These problems with ethanol pipeline shipments are not a concern for oil and natural gas, which are mainly shipped by pipeline in the United States.

Coal-fired plants produce over sixty percent of the electricity generated in Iowa. Most of the coal used in Iowa is low-sulfur coal shipped by rail from Wyoming. The state’s one nuclear plant, Duane Arnold, is located just northwest of Cedar Rapids and generates almost 8 percent of the state’s electricity. Iowa is one of the leading states in wind power generation. Its wind turbines are located primarily in northwest and north-central Iowa. Wind’s share of the state’s electricity generation increased from under 3 percent in 2004 to almost 25 percent in 2012. 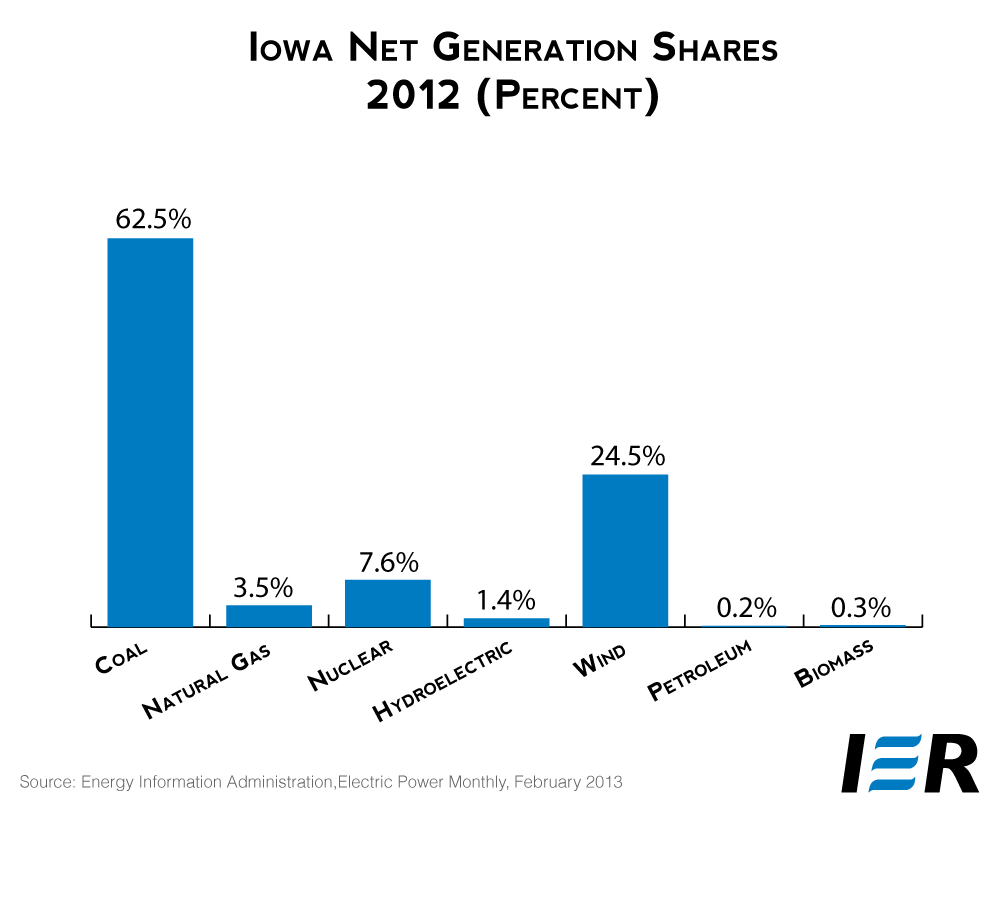 Iowa is a member of the Midwestern Regional Greenhouse Gas Reduction Accord, a regional agreement among the governors of six Midwestern states and the premier of one Canadian province to reduce greenhouse gas emissions through a regional cap-and-trade program and other policy measures. The Accord was signed in November 2007 as a part of the Midwestern Governors Association Energy Security and Climate Change Summit and while not formally suspended, participating states are no longer pursuing it.    Iowa House File 2754, passed in 2006, mandates that 25 percent of petroleum used in the formulation of gasoline come from biofuels by 2025. The bill provides incentives for creating infrastructure to store and dispense renewable fuel and provides related income tax credits, excise taxes and penalties. The Iowa Alternate Energy Law requires the state’s two investor-owned utilities (MidAmerican Energy and Alliant Energy Interstate Power and Light) to own or to contract for a combined total of 105 megawatts of renewable generating capacity and associated energy production. Eligible resources include solar, wind, waste management, resource recovery, refuse-derived fuel, agricultural crops or residues, woodburning facilities, or small hydropower facilities. In 2001, Iowa’s governor established a secondary, voluntary goal of 1,000 megawatts of wind generating capacity by 2010. Effective January 1, 2004, all electric utilities operating in Iowa are required to offer green power options to their customers, which allow customers to make voluntary contributions to support the development of renewable energy sources. Utilities must file their program plans and tariff schedules with the Iowa Utilities Board; the filings for non-rate-regulated utilities are intended to be used only for informational purposes.

Iowa requires new residential and commercial buildings to meet energy building codes. Residential and commercial buildings must meet the 2009 International Energy Conservation Code (IECC)  The IECC developed by the International Code Council is a model code that mandates certain energy efficiency standards. The state energy code is reviewed on a three-year code cycle corresponding to publication of the IECC. In April 2005, Iowa governor Tom Vilsack issued Executive Order No. 41, directing state agencies to reduce electricity and natural gas use in buildings by an average of 15 percent by 2010, relative to their energy use in 2000. In February 2008, Governor Chet Culver issued Executive Order No. 6 (EO 6), providing for a further 15 percent reduction in the use of natural gas, fuel oil, electricity, and water in state buildings within 5 years. The new goal takes into account growth in the state workforce and changes in building operations. In 2008, Iowa enacted S.B. 2386, which requires the Iowa Utilities Board to create energy savings standards (electricity and natural gas) for all rate-regulated utilities. Utilities must reduce retail sales by 1.5 percent of average sales for the previous 3 years by December 31, 2011. Utilities that are not rate-regulated (municipal and cooperative utilities) were required to establish their own energy efficiency goals. A utility may reduce energy consumption through improvements to its infrastructure or through customer programs such as energy studies and audits, education, direct rebates and other financial assistance, research projects, time-of-use-rates, tree planting, and hot water insulation distribution programs. All programs must be cost-effective for both customers and the utilities. Iowa’s statutes do not explicitly authorize the Iowa Utilities Board to mandate net metering, but this authority is implicit through the board’s enforcement of PURPA and Iowa Code § 476.41 et seq. Iowa’s net-metering subrule, adopted in July 1984, applies to customers that generate electricity using alternate energy production facilities (photovoltaics, wind, biomass, hydroelectric, municipal solid waste, small hydroelectric) and is available to all customer classes of Iowa’s two investor-owned utilities. There is no explicit limit on either the size of a net-metered system or on total enrollment. However, separate rule waivers have allowed the two utilities to limit individual systems to 500 kilowatts.

Iowa does not produce fossil energy so it must get its supplies from other states and Canada.  It generates its electricity mainly from coal (63 percent) and wind (25 percent). Iowa is rich in renewable energy potential in both wind power and biofuels production. The state leads the nation in production of corn and ethanol made from corn. Its wind power potential places the state among the leading wind producers in the nation. The state has low electricity prices. Its gasoline prices are the 17th lowest in the nation, according to AAA.