As the Environmental Protection Agency (EPA) threatens to shut down vast amounts of coal power plants, the federal government continues to shower renewable energy producers with billions of dollars in subsidies and tax incentives. Despite claims from the wind industry itself that is it now cost competitive, Sen. Grassley (R–IA) recently sent a letter to Sen. Hatch (R-UT), Chairman of the Senate Finance Committee, urging him to extend the Production Tax Credit (PTC)—a multi-billion dollar subsidy for wind power—largely on the basis of alleged job creation.

We have discussed the grid reliability problems and high costs associated with shutting down reliable power plants and attempting to replace them with intermittent wind power, but we have not recently addressed arguments about jobs amid this dynamic. Sen. Grassley wrote that the wind energy industry supports 6,000 jobs in Iowa and 73,000 jobs nationally, and claims that the PTC ‘s expiration would “pull the rug out from under domestic renewable energy producers.” This is simply inaccurate, and perpetuates the myth that subsidizing wind turbines while shutting down existing power plants will be a net-job creator.

The EPA’s regulation of carbon dioxide emissions from power plants highlights the job-killing transition proposed by the administration. This carbon agenda, which the administration’s public relations team calls the “Clean Power Plan”, threatens to tear down the existing electricity generation infrastructure in the name of carbon dioxide emissions. This carbon agenda will magnify the market-distorting subsidies from the PTC—contributing to an estimated peak of one million job losses—will drain hundreds of billions of dollars from American families through increased energy bills, and will threaten the electric grid by rapidly switching from reliable to intermittent sources of electricity. Further, electricity from new wind energy sources is nearly three times more expensive than electricity from existing coal-fired plants.

The Energy Information Administration (EIA) estimates that power plant regulations, set to be finalized this summer, will accelerate coal closures and cause wind installations to skyrocket compared to the base case. Wind capacity is projected to increase by 236 percent by 2040, while coal-fired capacity will be reduced by 31 percent over the same period.

Job losses caused by EPA’s carbon agenda will be substantial. An estimate from the Heritage Foundation found a peak loss of 1 million jobs and an average annual loss of 300,000 jobs by 2030. The National Black Chamber of Commerce estimates that 1.4 million Black and Hispanic Americans are projected to lose their jobs due to the plan by 2035. Even if the wind energy industry tripled in size over the next two decades, these job losses will overwhelm any modest gains in the subsidized wind industry.

EPA’s carbon agenda, combined with impacts from other EPA regulations including the Mercury Air Toxic Standards and the Cross-State Air Pollution Rule, are some of the most expensive regulations in the agency’s four-decade history. These environmental policies together threaten to retire 103 gigawatts of reliable coal power—enough to meet the entire peak electricity demand of Brazil. The projected cost to ratepayers range from $366 billion to $566 billion by 2030. That’s money that could be put towards productive rather than destructive uses, which would help American families and create private-sector jobs.

Wind power has grown over the last decade, fueled by tax credits and other incentives. The PTC, the main federal subsidy for wind power, has been around since 1992. It currently provides wind facility owners with a subsidy of $23 per megawatt-hour for the first 10 years of operation, so even if the subsidy expired at the end of the year, the industry is still scheduled to receive billions in benefits. Specifically, the PTC is projected to cost over $18 billion over the next decade.

Other incentives have also boosted the wind industry at the expense of taxpayers. As one example, a temporary cash grant was offered in lieu of a tax credit for turbines constructed between 2009 and 2011. The section 1603 grant program paid out over $13 billion for wind energy projects in five years, with wind projects claiming over 55 percent of the program’s total expenditures but making up only about 1 percent of all projects. 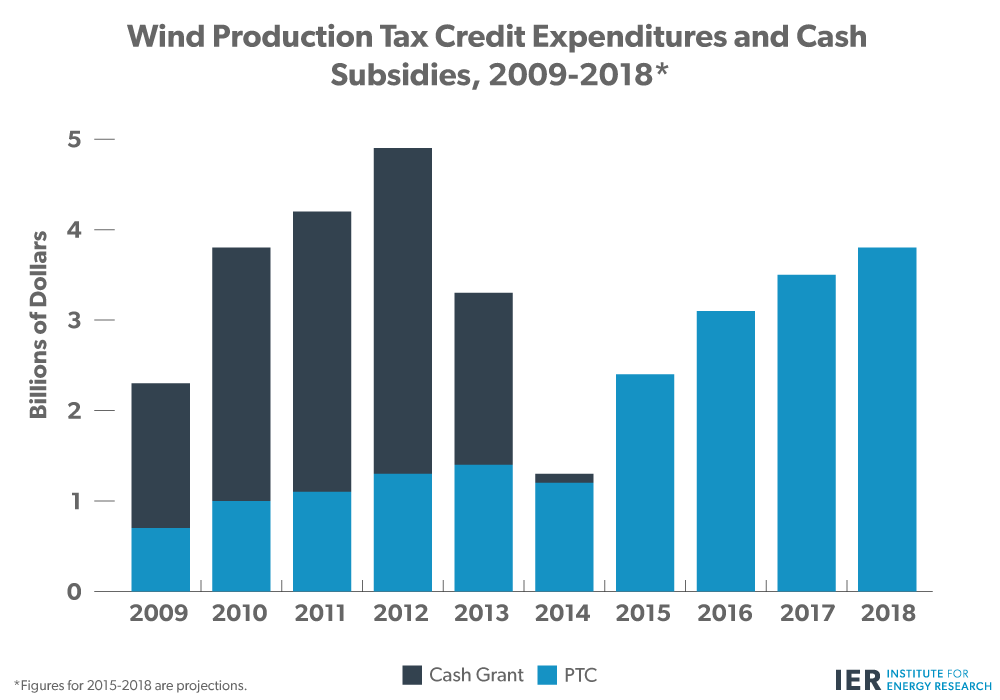 The economic drag of these programs causes net harm to the economy and jobs. Despite arguments from wind lobbyists about the 73,000 jobs “created” by pro-wind policies, empirical evidence suggests that those 73,000 jobs likely come at the expense of more than 160,000 jobs throughout the rest of the American economy. As we have highlighted before:

The question isn’t whether the PTC “creates jobs”—it’s whether it creates more jobs than it takes away from the rest of the economy. In Spain, for example, where the government pushed “green energy subsidies” aggressively, 2.2 jobs were lost for every “green job” that the subsidies supported.

Focusing on visible jobs created by subsidies while ignoring the other effects of the subsidies—namely, the economic hardship that falls on the rest of America as it’s forced to foot the bill—is simply bad policy. American taxpayers cannot afford for advocates of the PTC to get their way yet again.

The PTC and section 1603 grant cost over $22 billion since 2009, and the PTC is projected to cost over $18 billion throughout the next decade. These subsidies continue to penalize coal-fired plants, which are already being shut down in droves due to the EPA’s Climate Rule and several anti-coal rules that came before it. With job losses due to anti-coal regulations and costly wind subsidies projected to reach well over one million, wind advocates should drop the jobs rhetoric and focus on creating a product that no longer stakes its existence on a federal subsidy.

Wind Lobby's Critique of IER Study Fails on All Fronts

It's Time for President Obama to Approve Keystone XL