The bottom line: shutting down existing power plants before the end of their economic lives and replacing them with new generation resources will increase electricity rates.

The American Wind Energy Association (AWEA), the lobbying arm of the wind industry, wrote a response to the IER study. AWEA referred to our study as “a new attack piece” against the wind industry, despite the fact that the study was general in nature and reported on all major sources of electricity including natural gas, coal, nuclear, and hydroelectric power. The central theme in AWEA’s argument is that wind energy “is one of the lowest cost sources of electricity, particularly among low- and zero-emission energy sources.”

AWEA may not like our finding that existing nuclear power plants provide electricity at a levelized cost of $29.60 compared to new wind’s Levelized Cost of Electricity (LCOE) of $106.80. But AWEA’s vitriol towards data-driven reports by IER is nothing new—in the past AWEA has reacted with name-calling when IER publishes facts about the wind industry. Below, we go point-by-point through AWEA’s claims and show that our study stands up to AWEA’s scrutiny.

AWEA Claim #1: the “first trick in their paper The Levelized Cost of Electricity from Existing Generation Sources is using obsolete wind cost assumptions.”

This claim is false, unless data that was current until June 2015 is considered “obsolete” for a study released in the same month. Our study was finalized in June 2015—the same month the Energy Information Administration (EIA) came out with new LCOE data for new sources of electricity. We used EIA’s 2014 data, which was the most recent available at the time. Updating to 2015 data does not change the result of the analysis, as the table below shows. 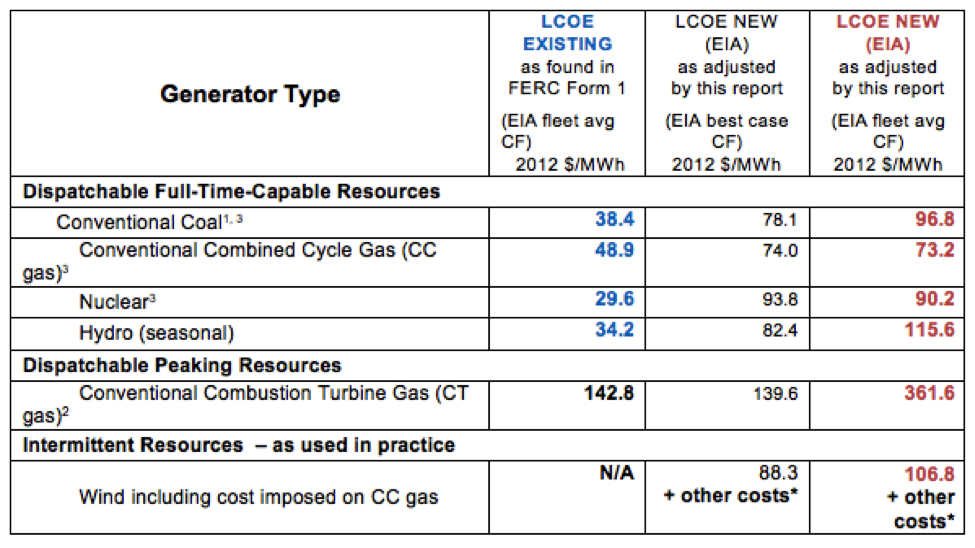 AWEA Claim #2: “[M]arket data indicate the actual average purchase price for wind energy was $25.59/MWh in 2013, or well under $50/MWh if the impact of the Production Tax Credit (PTC) on long-term wind purchase prices is removed.”

This claim is wildly misleading. It may be true that the average price of recent power purchase agreements (PPAs) is only $25/MWh, but that says little about the true cost of wind power. AWEA lobbyists know better than anyone how many subsidies and mandates are built into PPA prices for wind power. Wind is the beneficiary of dozens of subsidies and other government support, yet AWEA only recognizes one of the largest sources—the wind production tax credit (PTC).

The reality is that AWEA’s own made-up numbers actually show that wind is not competitive with existing sources of generation—and calculating the cost of existing sources of generation was the point of our report. Taking AWEA’s figure above ($50/MWh) indicates that building new wind is already an unattractive option relative to existing resources like nuclear power ($29.60). By failing to recognize this simple math, AWEA seems to miss the point of our study.

However, the PTC is not the only subsidy distorting the PPA price for wind power. Wind is the beneficiary of at least five major subsidies:

But don’t take our word for it. These subsidies are well known. In 2010, a White House report written by Larry Summers, Ron Klain, and Carol Browner explained that the subsidies for wind projects are massive. They explained that total government subsidies for the Shepherds Flats wind project totaled $1.2 billion. The total project cost $1.9 billion. When government subsidies cover nearly 60 percent of the value of a project, the sale price loses meaning as a true measure of cost.

And as we highlighted in our report titled The Case Against the Wind Production Tax Credit, which AWEA did not challenge, the Government Accountability Office counted 82 initiatives across nine federal agencies that supported the wind industry. It is disingenuous for AWEA to point to one subsidy and pretend it tells a complete story about the federal support enjoyed by wind power.

Because of the many subsides artificially lowering the PPA price for wind power, PPA prices do not tell an accurate story of the real cost of electricity from wind facilities. EIA estimates of the LCOE of wind power are much more defensible.

EIA notes that “The LCOE values for dispatchable and nondispatchable technologies are listed separately in the tables, because caution should be used when comparing them to one another.” This is because wind is, by its nature, not reliable. The wind doesn’t always blow. In order to make more apples-to-apples comparisons with other sources of generation, we needed to make some adjustments to EIA’s estimates to reflect wind’s unreliability and need for back up when the wind isn’t blowing.

To EIA’s baseline data, we added in the costs imposed by unreliable wind electricity on other resources—we call these “imposed costs.” Because wind is unreliable, it imposes very real and significant costs on other sources of electricity generation and the power grid. With a more complete picture of the cost of wind power, we estimate that the LCOE for wind is $106.80.

False. By definition, sunk costs are already incurred and hence unavoidable. In contrast to sunk costs, the imposed costs we calculate in our study not only apply to existing generation resources but also new resources. The costs are ongoing and avoidable. In fact, the way we calculated imposed costs ties directly to the most relevant comparison of ongoing—not sunk!—costs in the electricity industry: the pairing of new wind facilities with new combined cycle gas plants. On this point, AWEA fails basic economics.

What are the “imposed costs” of wind? Notably, wind is the only intermittent resource in our study. One implication of wind power’s intermittency is that it has a parasitic effect on the rest of the generation fleet, which has to back down its output—which is controllable or “dispatchable”—in lockstep with any increase in wind generation. By displacing the energy from other generation resources without replacing their capacity to the same extent, wind imposes costs on the dispatchable fleet and raises the LCOE for dispatchable resources.

In the chart below, the dark blue areas represent the “cutting in” effect of wind power on the power grid. The gas plant’s output (light blue) represents the non-wind resources on the power grid, which are forced to back down in order to accommodate the unreliable wind output (dark blue). Our estimate of “imposed costs” shows how this parasitic effect increases the LCOE for non-wind resources using natural gas plants as a proxy. 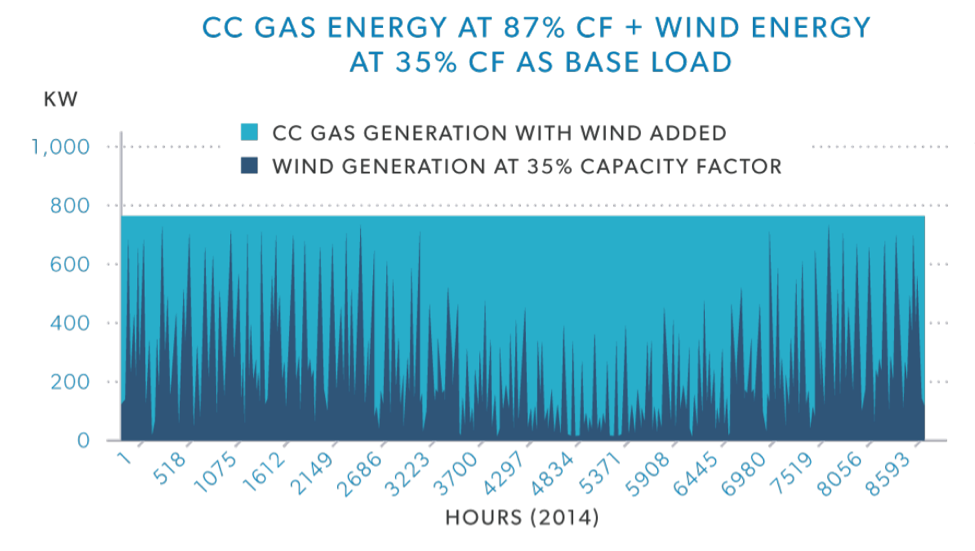 Using conservative estimates, we find that the “imposed cost” of wind power on the dispatchable fleet is between $15.87 and $29.94 per MWh. These costs are in no way “sunk.”

AWEA Claim #4: “EIA’s method shows that a MWh of wind energy has an average economic value of $64.60/MWh, much higher than the current cost of wind energy of under $50/MWh, indicating wind energy provides net benefits for consumers.”

Even if you agree that the EIA estimate above ($64.60/MWh) reflects the real economic value of wind to the power grid, AWEA’s claim that electricity from wind only costs $50/MWh has no basis in reality. As we explained above, AWEA’s estimate ignores the dozens of subsidies that wind receives in addition to the wind production tax credit.

If AWEA had used EIA data to calculate the “net benefits” of wind power, it would have subtracted EIA’s cost estimate of $73.60/MWh from EIA’s “benefit” estimate of $64.60/MWh to come up with negative $9/MWh. The results only get worse when we adjust the EIA estimates to reflect the imposed costs highlighted above. Using our own updated cost estimate of $106.80/MWh for wind and EIA’s “benefit” estimate, we would have to conclude that wind power falls woefully short in a cost-benefit test—net benefits would be negative $42.20/MWh.

Our study on the cost of electricity from the existing generation fleet is a data-driven analysis of the economics of the power grid. AWEA’s characterization of the study as “a new attack piece” against the wind industry is unfounded—unless AWEA perceives reality as an attack on the wind industry. The fact is, shutting down existing power plants before the end of their economic lives is an incredibly expensive thing to do and, as a result, will increase the cost of electricity. That is true whether the replacement technology is wind, natural gas, or any other new resource.

AWEA’s misinformation surrounding IER’s work is nothing new. As with previous critiques of IER reports, AWEA’s rebuttal to “The Levelized Cost of Electricity from Existing Generation Resources” fails to identify any problems with our paper while exposing AWEA’s own flawed analysis.