China again added more wind capacity in 2011 than did the United States: 2.6 times as much, according to the Global Wind Energy Council.[i] But even though China built an impressive 18 gigawatts of wind capacity last year, the wind industry is in the doldrums because European and American subsidies are running out.

While China may be in a growth market for erecting wind turbines, whether they produce power or not, over capacity in the wind turbine manufacturing market is affecting growth in developed countries. Over capacity in the turbine market has been caused by competition from lower-cost Chinese manufacturers, a cut-back in subsidies in European countries, and low natural gas prices in the United States where electricity producers are selecting natural gas over wind due to its lower cost and reliability.

European countries have found that they are not able to sustain the subsidies that have marked the advent of wind power in their countries. Both Germany and Spain, the two countries in Europe with the largest wind capacity, have cut their subsidies. Spain has a freeze on subsidies for all new renewable power plants. Germany will be phasing out all subsidies for renewable power by 2017.

According to the Global Wind Energy Council, China added 18 gigawatts of wind capacity in 2011, 44 percent of the total capacity added worldwide. The United States added 6.8 gigawatts, or 17 percent. One interesting note—the real comparison is not the installed capacity, but the amount of capacity that actually produces electricity. According to the International Energy Agency, in 2010, the United States produced almost 90 percent more wind power than China with 10 percent less wind capacity.[ii] The lower amount of wind generated electricity for China is due to the lack of integration of its wind capacity with its transmission grid. Data have shown that only about 30 percent of China’s wind units are connected to its electricity grid.

The wind industry is looking into new markets in Africa, Asia, and Latin America. Wind installations in Brazil increased by half in 2011, with a total wind capacity of 1.5 gigawatts. Honduras and the Dominican Republic constructed their first wind farms last year.[iv] 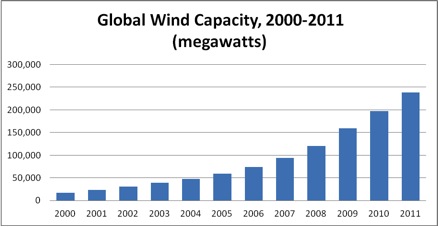 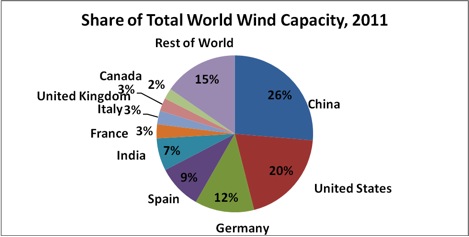 Vestas Wind Systems A/S (VWS), the largest turbine maker, had to cut sales forecasts twice in three months because the renewable industry is suffering from increased competition from Chinese manufacturers, lower subsidies in many countries, and low natural gas prices in the United States resulting in a global oversupply of turbines. Natural gas prices in New York, for example, dropped 32 percent in 2011 to $2.99 a million British thermal units, falling below $3 for the first time in a decade. In Europe, Germany, France, and Spain reduced their subsidies[v] and in the United States the 1603 grant program rebating 30 percent of the investment cost for qualified renewable technologies expired at the end of 2011. According to Bloomberg New Energy Finance, global purchases of wind turbines are expected to drop 14 percent in 2012 from 2010 levels and are not expected to surpass 2011 levels for two years.[vi]

On January 12, 2012, Vestas announced that it was cutting 2,335 positions worldwide, or 10 percent of its total workforce. The company lost 166 million Euros ($220 million) in 2011, which was four times more than analysts had estimated. The Bloomberg Wind Energy Index consisting of 64 companies fell 22 percent in 2011 due, in part, to Vestas losing 65 percent of its market value.

Due to the expiration of the production tax credit in the United States at the end of this year, Iberdrola Renewables, a Spanish wind company and the second-largest U.S. wind operator, suspended work on new U.S. projects that cannot be completed in 2012.[vii] The production tax credit is worth 2.2 cents per kilowatt-hour of electricity produced during the first 10 years of a wind farm’s operation.

Iberdrola, Spain’s largest onshore wind company, is in agreement with the country’s announcement of a temporary halt of subsidies for all new power plants using renewable energy. Presumably this is because millions of dollars in subsidies have gone to solar, which accounts for 13 percent of the cost of Spanish electricity, but only produces 3 percent of the electricity. The “tariff deficit” in Spain, the accumulated difference between what consumers pay and what it costs suppliers to deliver the subsidized electricity, is costing Spain 24 billion Euros ($31 billion) that the country cannot afford.[viii]

In the United Kingdom, 101 Tory MPs have written to the Prime Minister demanding that the £400 million-a-year ($627 million) subsidies paid to the wind turbine industry be dramatically cut. There are more than 3,000 onshore wind turbines in Britain and at least 4,500 more turbines are expected to be constructed due to the Government’s agreement to meet legally binding targets for cutting carbon dioxide emissions.[ix]Many in the U.K. also want planning laws to be tightened so there is a better chance of stopping new wind farms from being developed in order to protect the countryside.

With the financial crunch and countries being more fiscally responsible, wind and other high-cost, low-reliability forms of energy production are on the rocks. It is hard to see how wind generation will continue to grow rapidly without lavish financial incentives from governments.

The Obama Budget and Wind Power