A new study by IER estimates the net burden of the wind Production Tax Credit (PTC) broken down by state. The study finds that 30 states (plus the District of Columbia) are net losers, meaning that their citizens pay more in taxes to fund the PTC than members of the state receive in PTC subsidies. However, the PTC is still a losing deal even for most of the people in the “winning” states, too, because the subsidies go to the producers of wind power.

Beyond the specific distributional issues, the wind PTC is a net loss for the American economy as a whole. It arbitrarily encourages the overproduction of wind capacity, as even its supporters implicitly admit when they warn that removing the PTC would be devastating to the wind sector. This is actually an argument to remove the PTC, not to renew it.

The federal production tax credit (PTC) for renewable electricity was originally enacted as part of the Energy Policy Act of 1992. It gave electricity producers a tax credit for each kilowatt-hour produced from qualifying renewable energy sources. Originally the PTC was set at 1.5 cents, but it has been adjusted for price inflation and is currently at 2.3 cents per kilowatt-hour.

Since its inception, the PTC has expired and been renewed several times. It actually expired (briefly) at the end of 2012, only to be renewed in January 2013 as part of the American Taxpayer Relief Act of 2012.  Under current law, it is set to expire once again at the end of 2013.

To the novice, the subsidy of “2.3 cents per kilowatt-hour” sounds like peanuts. However, we have to analyze the PTC in the context of the wholesale electricity market.

First of all, the wind subsidy is a production tax credit, not a deduction or even a simple transfer of money (that would be taxed). A tax credit means that this is taken right off the tax bill due to the IRS. Therefore, to give a tax credit of 2.3 cents per kilowatt-hour is equivalent to giving a (pre-tax) federal handout of up to 3.8 cents per kilowatt-hour, if a particular wind producer faces the top 39.6 percent marginal income tax rate.

This is quite significant, because the wholesale price for electricity—which is what wind and other producers obviously receive when selling their product—frequently fell in the range of 3 to 5 cents per kWh in 2012.[1] Thus the PTC could effectively give a utility a bigger subsidy than the actual market price. It would be as if Uncle Sam allowed car dealers to knock off $60,000 from their tax bill for every $50,000 car they sold. Indeed, the PTC is so generous that it can result in negative wholesale electricity prices. As EIA explains:

Wholesale electricity markets sometimes result in prices below zero. That is, sellers pay buyers to take the power. This situation arises because certain types of generators, such as nuclear, hydroelectric, and wind, cannot or prefer not to reduce output for short periods of time when demand is insufficient to absorb their output. Sometimes buyers can be induced to take the power when they are paid to do so.

Technical and economic factors may drive power plant operators to run generators even when power supply outstrips demand. For example:

In a market economy, prices guide producers in the allocation of resources. By giving such an enormous—and artificial—spur to wind generation, the PTC distorts the electricity market and fuels an unwarranted expansion of wind capacity, while it artificially devalues electricity production from non-PTC eligible sources such as natural gas, coal, and nuclear. Experts disagree on whether removal of the PTC would compromise wind capacity growth as much as its proponents warn, but even if this warning were perfectly true, it would simply confirm how much the wind sector is being propped up by government favoritism.

The specific contribution of IER’s new study is to break down the net transfers among the states (and DC) from federal wind subsidies. Remember, federal subsidies (whether explicit checks, or implicit subsidies in the form of tax advantages) must come from somewhere. The Joint Committee on Taxation estimated that the 2013 “cost” of the PTC will be $12 billion, in the sense of giving this much in aggregate tax credits to various wind producers. Even though the PTC is a tax credit—versus an actual mailing out of checks—it nonetheless rearranges the burden of taxation (holding federal spending constant). The study therefore estimates (using a proxy because the actual variety of wind subsidies are complex, going beyond just the PTC) whether the net impact on a state is positive or negative, in the sense that the citizens must “pay for” their share of the PTC, but might receive more or less than this amount in the form of PTC credits for wind generation. 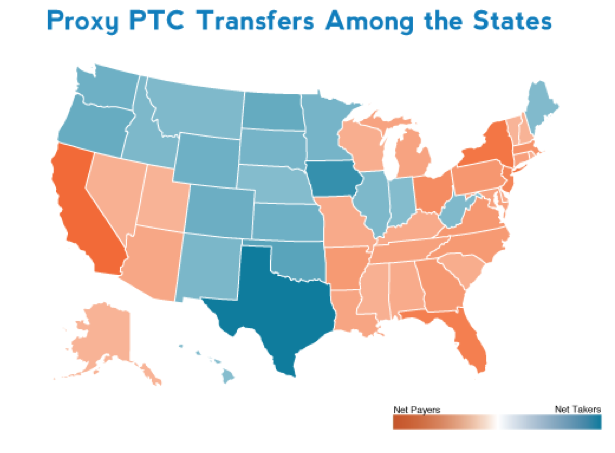 In particular, California was the hardest-hit state, with a net “loss” of $196 million. Texas was the biggest “winner,” at $394 million.

However, we must keep in mind that even within states classified as “net takers,” the vast majority of the population lose from the existence of the wind subsidies. After all, it’s not as if the IRS takes the population of Texas and divides $394 million among them, evenly. Rather, the wind subsidies are concentrated in the hands of a small group of wind producers, while everyone else in Texas shoulders his or her portion of the correspondingly higher national debt (to the extent that Congress does not lower its spending to perfectly offset the extension of the PTC).

The federal tax code is so onerous that it can be used to indirectly pick winners and losers in energy markets. By placing a high baseline tax on everyone, then selectively giving credits here and there to favored groups, the government can artificially subsidize particular sectors, such as wind generation of electricity. IER’s new study outlines the state-by-state breakdown of the winners and losers from this favoritism to wind power. It is a very inefficient system that leads to perverse outcomes, such as a massive expansion of wind power that would not be economical on a level playing field. Giving taxpayers their money back is always a welcome move, but the best way to do it would be a general reduction in rates, coupled with matching spending cuts, so that the IRS is not effectively planning the economy.