Like an itch you can’t quite scratch, the wind Production Tax Credit (PTC) is a lavish subsidy that refuses to go away. Created by the Energy Policy Act of 1992, the PTC provides a tax credit of $23 per megawatt hour (MWh) of wind production.

The PTC has grown substantially in both size and scope in the last year. The PTC was set to expire at the end of 2012 before Congress passed a one-year extension as part of the fiscal cliff deal at a cost of $12 billion to taxpayers. Even with such heavy support for over two decades, wind power contributed just 3.5 percent of the electricity generated in the U.S. in 2012.

The Institute for Energy Research has consistently been critical of the Wind PTC because it, distorts electricity markets and costs taxpayers on average more than a billion dollars a year.[i] This blog post explores some of the results of the wind PTC.

Wind is an intermittent and unreliable source of electricity generation. Wind energy only works when the wind is blowing. Due to this immutable law of nature, wind tends to produce most of its electricity during off-peak hours when electricity demand is low, as opposed to during the mid- to late-day when demand is high and power is needed the most.

As an unreliable source, wind presents grid operators with numerous operational issues, including maintaining power quality, meeting power availability requirements and expectations, and supporting system reliability. The unique challenges of integrating intermittent sources like wind into the electric grid can impose hidden costs on consumers. For example, in a recent Energy Journal article, the authors conclude, “the variability of wind resources” and “the need for higher levels of reserve generating capacity to maintain reliability standards impose additional costs on the system that should not be ignored.”[ii]

One of the biggest problems with the PTC is that it provides incentives for wind producers to sell electricity to the grid at “negative prices.” In other words, the PTC subsidy is so excessive that wind producers frequently pay the grid to take their electricity. Since the PTC provides a tax credit of $23 per MWh regardless of how that power is valued on the market, wind producers can actually pay the electrical grid to take completely unwanted power and still make money.

Eligible renewable generators can take a 2.2 cents/kWh or $22/MWh production tax credit (PTC) on electricity sold. This means that some generators, primarily those operating wind turbines, may be willing to sell their output at negative prices to continue producing power. Typically, wind generators are the largest such group in any region.[iii] 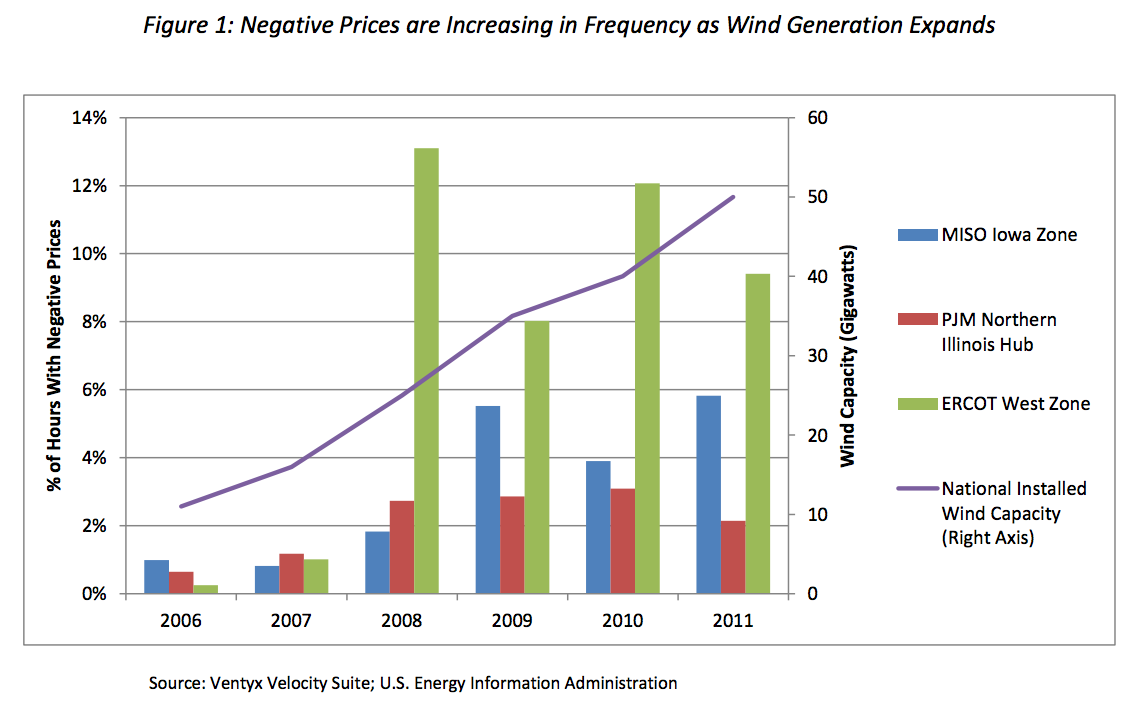 Since wind produces the greatest amount of power at low-demand times, and wind producers can pay grid operators to take their electricity because of the PTC, wind can actually create transmission congestion where it did not exist before. For example, the Congressional Research Service (CRS) noted the following in a 2012 report: “Negative power prices associated with wind power might generally occur at night when wind is producing at high levels. Large amounts of wind power generation can potentially contribute to transmission congestion and result in negatively priced wholesale power in certain locations.” [iv]

In addition to transmission congestion, negative pricing caused by the wind PTC can negatively impact other energy sources like coal, nuclear, and natural gas power plants. As opposed to wind, these are reliable sources that can meet continuous energy demand. In fact, wind actually depends on so-called base load sources as back up when the wind it not blowing. Base load sources—such as coal, natural gas, and nuclear—are essential to maintaining grid reliability.

The PTC creates a “biting the hand that feeds you” scenario in which artificial demand for wind driven by the PTC harms base load generation. Indeed, a 2012 article in Energy Journal finds that increasing wind generation in Texas discourages investment in natural gas, even though wind depends on natural gas as back up

Despite the importance of base load generation to the reliability of the electric grid, the PTC unfairly tilts the scales in favor of intermittent, unreliable wind generation that generally fails to perform when power is most needed. The resulting market distortions provide perhaps the strongest case for ending the PTC.

The PTC is a massive waste of taxpayer dollars. Perhaps worse, the PTC distorts energy markets by allowing wind producers to actually pay the grid to take their electricity so they can continue to collect federal largesse. This harms reliable energy sources like natural gas that Americans depend on keep the lights on. It is long past time for Congress to let the PTC permanently expire.

[i] Once a project qualifies for the PTC, the credit applies for ten years. https://www.instituteforenergyresearch.org/2012/12/19/aweas-proposed-6-year-ptc-extension/