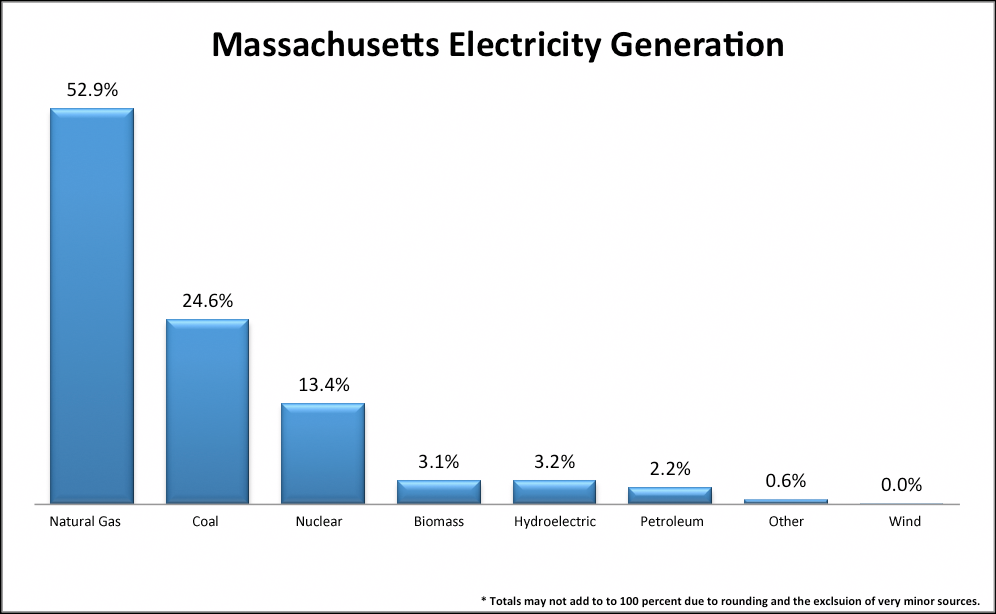 Massachusetts does not have fossil fuel resources, but the state has renewable energy potential. That includes wind energy off the Atlantic Coast and in the Berkshire Mountains, although wind now barely contributes to Massachusetts’s energy supply. An offshore wind power project is proposed off of Cape Cod. Also, much of Massachusetts is covered with dense forest, offering possible biomass resources. However, controversy exists for both offshore wind and biomass in the State. Wood generation has been under attack because of pollution and truck haulage issues. Massachusetts is home to two of the nine liquefied natural gas terminals in the United States: Everett and Offshore Boston.

Although affordable energy is a vital component of a healthy economy, regulations frequently increase energy costs. Regulations imposed in the name of reducing carbon dioxide and greenhouse gas emissions are especially costly. Carbon dioxide is a natural byproduct of the combustion of all carbon-containing fuels, such as natural gas, petroleum, coal, wood, and other organic materials. Today, there is no cost-effective way to capture the carbon dioxide output of the combustion of these fuels, so any regulations that limit carbon dioxide emissions will either limit the use of natural gas, petroleum, and coal, or dramatically increase their prices.

Below are some facts about Massachusetts’s regulatory environment that are likely to affect the cost of energy or the cost of using energy.