The Institute for Energy Research (IER) and the American Coalition for Clean Coal Electricity (ACCCE) released a report today that finds that building new electrical generating facilities to replace perfectly good existing plants ahead of their optimal retirement time increases electricity prices to consumers. This results because consumers must pay for the construction costs for the new plants—costs that have been largely paid off by existing plants. While this may be good for regulated utilities because it increases their rate base, it is bad for consumers and, ultimately, the economy.

For example, states that have renewable portfolio standards are forcing existing generators to retire by requiring a specified amount of renewable energy, mostly wind and solar power, to be built, regardless of the need for power or the longevity of the plants that have been supplying the grid.

As the report points out, adding new plants when they are not needed forces the old plants to generate less and their costs to rise. As more and more new capacity is added to the grid, the existing generating capacity is forced to produce less and less power and eventually many of the existing plants are not able to cover their fixed costs because there is insufficient demand for both the renewable power and their normal levels of generation. As a result, they are forced to retire prematurely. The retirement is premature because if they were allowed to generate power as they were designed, they would have been able to cover their costs in most cases.

The story gets even worse when consumers are being asked to pay the stranded costs of regulated utilities. This occurs when a plant that is targeted for closure has a remaining balance that must be paid as well as providing for a return to utility shareholders. For example, a coal plant in Wisconsin is slated for closure, but has stranded costs. The 1,210-megawatt Pleasant Prairie coal plant is idle and will remain closed until the remaining balance on the plant is repaid. The cost will approach $1 billion over the next two decades, according to filings with the Wisconsin Public Service Commission.

If markets were allowed to work as designed without federal subsidies and state mandates, the issues noted above would not be occurring.

The IER and ACCCE Report

Using FERC Form 1 data, the report calculated the levelized cost of electricity (LCOE) for existing generating units and compared those costs to the Energy Information Administration’s (EIA’s) most recent estimates of levelized costs for new plants, adjusted for today’s fuel prices and utilization rates (capacity factors). EIA defines LCOE as “the per-megawatt-hour cost (in real dollars) of building and operating a generating plant over an assumed financial life and duty cycle.”

The analysis indicates that, on average, existing power plants have lower fixed costs, yet similar variable costs, compared to their most likely replacements. The reason new plants have higher fixed costs is that they begin their operational lives with a full burden of construction cost to recover. Conversely, the ongoing fixed costs of existing power plants are lower because they have already paid for some or all of their original construction costs. This is akin to owning a car that is already paid for. While it might be fun to have a brand new vehicle, which may even get better gas mileage than the paid-for car, the cost of ownership for the new car will likely be significantly higher.

To understand the concept of imposed costs better, consider the business costs of hiring people who show up only when they want to, especially if the business is providing services necessary 24/7. Replacement workers would have to be contracted and compensated for their services whenever the other workers do not show up. Having to pay replacement workers increases the cost to the business, which are then passed onto consumers. This is analogous to the situation occurring when increasing amounts of non-dispatchable renewable energy sources are added to the grid.

Figure 1 below compares the costs of existing generators to new generators for the seven types of resources the report considers. 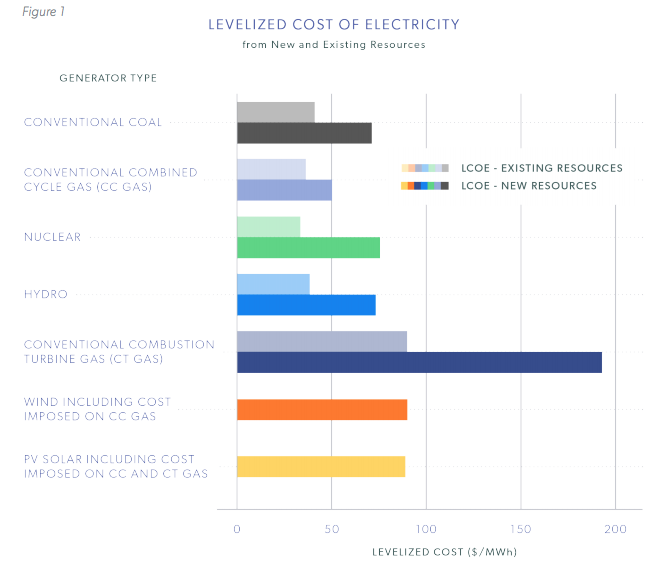 Thus, the report generally finds that absent external non-economic pressures, the most cost-effective generating option is not to replace existing resources. This result may not please regulated utilities, which make a profit from building new plants, but it is a better strategy for American consumers and America’s ability to compete. Using our existing versus new car analogy, many car owners would choose keeping a perfectly fine working car once it has been paid for rather than racking up debt to buy the latest model.

There is a growing consensus among economists and independent analysts that solar and wind power are making electricity more expensive mainly because they require a high level of back-up power (natural gas plants, hydroelectric dams, batteries, or some other form of reliable power) and extensive land and transmission lines.

In California, retail electricity prices are about 50 percent higher than the U.S. national average. California has a renewable portfolio standard that requires retail sellers and publicly owned utilities to procure 50 percent of their electricity from eligible renewable energy resources by 2030. The unreliability of solar and wind power, however, has required California to pay neighboring states to take their solar and wind energy when they are producing too much of it.

A research institute at the University of Chicago found solar and wind power were making electricity significantly more expensive. The researchers state that renewable portfolio standards “significantly increase average retail electricity prices, with prices increasing by 11 percent (1.3 cents per kWh) seven years after the policy’s passage into law and 17 percent (2 cents per kWh) twelve years afterward.” They found that consumers in the 29 states with renewable portfolio standards paid $125.2 billion more for electricity than they would have in the absence of the policy.

The higher cost of electricity reflects the costs that renewables impose on the generation system, including those associated with their intermittency, higher transmission costs, and stranded asset costs assigned to ratepayers.

Wind and solar power are not the inexpensive sources of energy that many thought they would be, since they impose costs on the generating system for back-up power, land requirements, and greater transmission lines. States and the federal government have forced their construction and operation through mandates and subsidies. If markets were allowed to work without interference, electricity prices would be lower for consumers and the United States would be an even more competitive producer of goods and services in the world marketplace.

“The trade group American Coalition for Clean Coal Electricity and the free-market Institute for Energy...