WASHINGTON — Today the Institute for Energy Research and the American Coalition for Clean Coal Energy released a new study evaluating the levelized cost of electricity (LCOE) from new and existing generation resources.

By relying upon data reported by energy generators themselves to the Energy Information Administration (EIA) and the Federal Energy Regulatory Commission (FERC), the innovative study takes into account several important considerations that other reports do not when calculating LCOE. These include the imposed costs of wind and solar generation (i.e. the costs imposed when dispatchable generation resources are required to remain in service but are forced to operate less in combination with wind and solar generation), as well as the costs of operating existing generation sources in addition to those of building and operating new plants. Including these considerations presents a fuller picture of the operating costs of wind, solar, coal, gas, nuclear, and hydroelectric sources.

The following chart shows the stark contrast between the cost of electricity from existing and new sources: 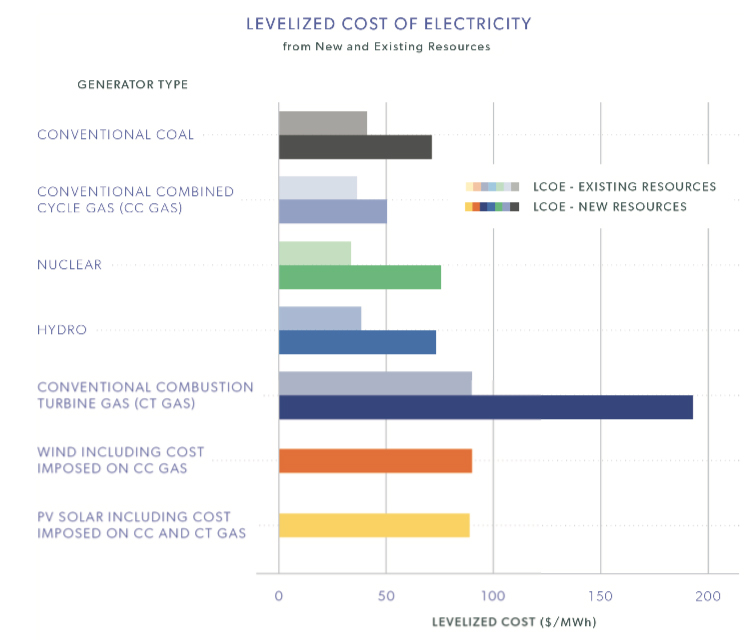 Tom Pyle, President of the Institute for Energy Research stated:

“This study illustrates why foolish policies like the Green New Deal and 100% renewable mandates would harm our economy and significantly raise the cost of electricity for American households. Shifting our electricity generation away from existing affordable and reliable plants to expensive and intermittent wind and solar would substantially increase energy costs for businesses and families. This study provides a necessary reality check for anyone making decisions about America’s electricity policy.”

“This new study is unique because it provides an apples-to-apples comparison of existing and new electricity sources. The study shows that policymakers should carefully consider levelized costs when decisions are being made to retire coal-fired power plants because replacing them with gas, wind or solar could be a bad economic decision.”

The Levelized Cost of Electricity from Existing Generation Resources