The Obama administration just announced a 20 percent goal for U.S. electricity to come from non-hydropower renewable energy by 2030.[i] To reach that goal, the United States would have to almost triple its existing non-hydro renewable energy levels in the next 15 years. However, the Obama Administration is pushing a back door way to achieve this goal—EPA’s so-called “Clean Power Plan” that requires existing power plants to reduce their carbon dioxide emissions by 30 percent by 2030. According to the Energy Information Administration (EIA) in its analysis of the proposed rule, non-hydroelectric renewables are a major compliance strategy and would increase their share from 6.9 percent in 2014 to 18.7 percent in 2030—almost meeting President Obama’s goal.[ii] 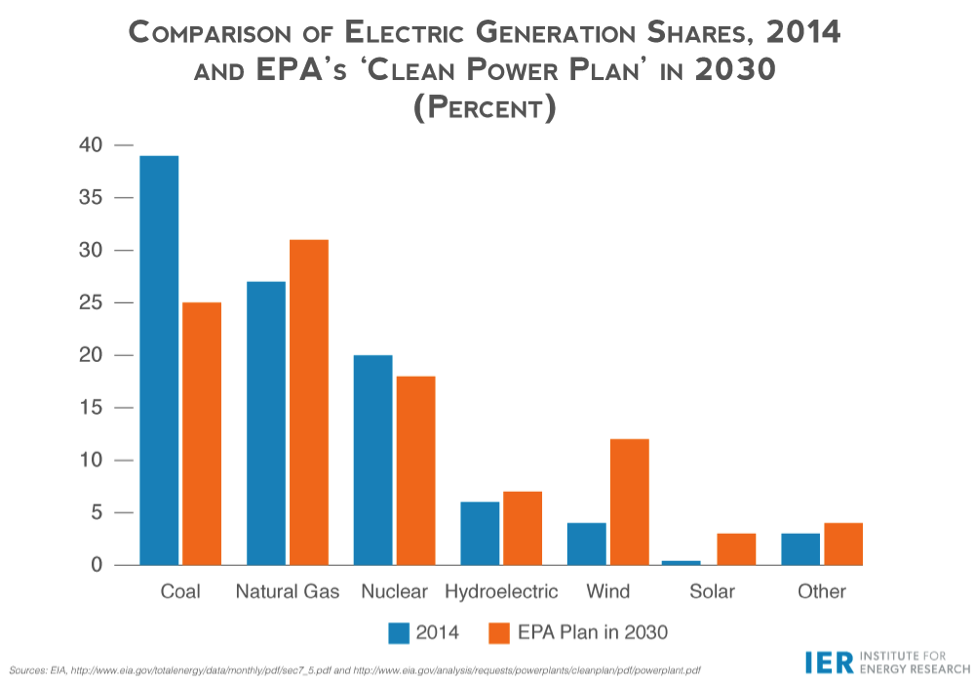 President Obama’s renewable commitment would require a tripling of current non-hydroelectric renewable capacity. The United States has 93 gigawatts of utility-scale non-hydroelectric generating capacity today[iii] and EIA’s analysis shows that number would increase to 291 gigawatts by 2030 if the proposed rule is implemented. According to White House Senior Advisor Brian Deese, incentives built into the Environmental Protection Agency’s Clean Power Plan and existing state and federal policies would drive the sector’s growth.[iv]

Of course, the President does not indicate that consumers will see higher electricity prices from his renewable goal, or that it requires expensive subsidies through the tax code. But, that will be the outcome. According to EIA’s analysis, residential electricity prices in 2030 will be 16 percent higher than today with the implementation of EPA’s so-called “Clean Power Plan” and other EPA regulations already in effect.

Why the Cost Increase?

The Obama Administration and solar and wind advocates want Americans to believe that wind and solar energy are free because they harness the power of the wind and sun, which are free resources. But, in fact, these generating technologies are more expensive than the existing coal-fired plants they would be replacing. That is because most of the existing fleet of generating technologies in this country have paid off their capital costs, and only have their operations and maintenance costs (including fuel) to pay to generate electricity for consumers. In fact, electricity from new wind farms is about three times more expensive than power generated from existing coal-fired plants and electricity from new natural gas combined cycle plants is nearly twice as expensive as power from existing coal plants.[v]

Despite EPA touting the efficiencies of its proposed rule, the fact is that it will cost the American public, on average, 4 times as much to reduce a ton of carbon dioxide between 2020 and 2030 than what the Obama administration claims is the global social cost of carbon—a measure of the health, property, agricultural, ecosystem, and other supposed impacts of emitting a ton of carbon dioxide—set at $48 a ton.[vi] And the amount of carbon dioxide reduced by the U.S. generating sector by 2030 will be released by China in just 13 and a half days.[vii] Further, by 2100, the proposed rule and American sacrifices will reduce global temperatures by only 0.018 degrees Centigrade.[viii]

But the Obama Administration cares little for these facts and the costs of its policies to the American public. If it did, the Supreme Court would not have had to reprimand the EPA. As Judge Antonin Scalia writes in his statement for the majority of the Supreme Court on EPA’s Mercury and Air Toxic Standards, “By EPA’s logic, someone could decide whether it is ‘appropriate’ to buy a Ferrari without thinking about cost, because he plans to think about cost later when deciding whether to upgrade the sound system.”[ix]

[ii] Energy Information Administration, Analysis of the Impacts of the Clean Power Plan, May 2015, http://www.eia.gov/analysis/requests/powerplants/cleanplan/pdf/powerplant.pdf

British Columbia’s Carbon Tax and “Leakage” Into the U.S.