A study found that the cost of former President Obama’s residential audit program exceeded the value of the energy savings and the environmental benefits. The computer models projected that the subsidies provided to homeowners would save far more money than they actually realized. The realized savings were only 58 percent of what the computer models predicted. (The efficiency rules were projected to save 2.5 times more financial value than they actually realized.) Further, they generated only $0.20 in environmental benefits per subsidy dollar spent. The study concluded that when all the benefits had been calculated, the auditing program had a negative rate of return of about 4 percent.[i] The Obama Administration’s home audit program, managed by the Department of Energy, was created as part of the 2009 stimulus bill. 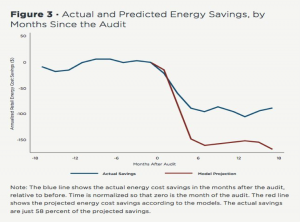 The study was conducted by researchers from the Massachusetts Institute of Technology, the University of Chicago, and the University of California, Berkeley. They conducted a randomized experiment of over 100,000 households in Wisconsin from June 2012 to February 2013 to evaluate two federally-funded residential energy efficiency programs—the Green Madison and the Milwaukee Energy Efficiency programs. The programs were funded with grants of $2.4 million and $732,000, respectively. The grants subsidized home audits educating homeowners about steps they could take to improve efficiency. An Energy Advocate was also provided to help homeowners understand and implement the audit results. Further, some of the energy efficiency investments were also subsidized.

There were two groups of home owners—those receiving information and a control group.

The study’s purpose was to assess informational and behavioral barriers and other market failures to the programs. The researchers assessed how imperfect consumer information or behavioral barriers might distort a consumer’s decision to have an audit. Then they assessed how energy price distortions cause the private benefits from the investments to be different from the social benefits.

The following summarizes the study findings[ii]: 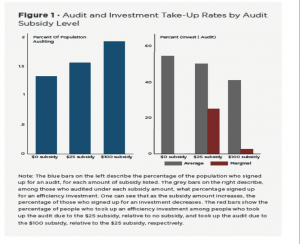 From this study, we find that subsidies for energy audits do not necessarily bring about additional energy efficiency improvements. And, to get the biggest bang, subsidies should be targeted towards investments that provide the greatest reductions in energy use. We also learned that the models and/or assumptions used in the models did a very poor job of predicting the energy savings.

President Trump delayed Obama Administration energy efficiency rules for walk-in coolers and freezers, central air conditioners, heat pumps, and compressors until June, and ceiling fans until September 30 so that his Department of Energy could assess them.[iii] Given the above study and the over prediction of the savings from the models, the Trump Administration should look at the benefits versus the costs of these energy efficiency rules very carefully and ensure that their benefits exceed their costs.

Despite the Paris Accord, India and Pakistan Will Continue to Use Coal