Pakistan’s Water and Power Ministry is committed to building as many as 12 new coal-fired power plants over the next 15 years as part of a large infrastructure investment project that China and its partners are funding. About $33 billion will be spent on 19 energy projects, including coal-fired and renewable power plants, transmission lines, and other infrastructure as part of the China-Pakistan Economic Corridor. But the majority of the new generating capacity (roughly 75 percent) will come from the new coal plants. Pakistan will use its own coal reserves of 175 billion metric tons, which are sufficient to fuel the country’s energy needs for several decades—growing its economy, creating new jobs, and fighting unemployment and poverty.[i]

At least 300 million of India’s 1.25 billion people have no electricity and many of those that do have access to electric power find it available for just three or four hours a day. The lack of power limits efforts to advance living standards and to increase the country’s manufacturing sector. As the world’s third-largest emitter of greenhouse gases in 2015, India is attempting to build a modern industrialized economy, and bring electricity to its entire population, without dramatically increasing carbon emissions. But, to keep up with the increasing demand for electricity, India must add about 15 gigawatts of generating capacity annually for the next 30 years. Most of the country’s electricity is supplied by coal-fired plants. Not only does the country need additional generating capacity, it also needs to upgrade its energy infrastructure, which is in poor shape.[ii]

Pakistan has a current energy deficit of about 4,000 megawatts. According to the International Energy Agency (IEA), average energy demand in the country is around 19,000 megawatts, but generation is about 15,000 megawatts. Peak demand is around 20,000 megawatts during the months of May to July when air conditioning is needed, adding additional strain on the system and causing power disruptions. IEA expects electricity demand will increase to over 49,000 megawatts by 2025 as the country’s population increases.[iii]

According to the World Bank, only 67 percent of Pakistan’s 190 million people have access to electricity. To increase access and keep pace with economic growth, the country needs to invest between 3.7 percent and 5.5 percent of its GDP annually in increasing electrical production.

The country intends to use coal because the desert region of Tharparkar in southern Pakistan has some of the world’s largest coal reserves (175 billion metric tons) and they are largely unexploited. Like China, Pakistan will use the latest “supercritical” coal technology, which require less coal per megawatt-hour, leading to lower emissions of carbon dioxide and mercury, higher efficiency and lower fuel costs per megawatt.

Pakistan currently ranks 135th on the list of global emitters of carbon on a per capita basis, accounting for less than 1 percent of total global carbon emissions. The country’s carbon dioxide emissions in 2015 totaled 180 million metric tons and are increasing at a rate of 5.7 percent annually.[iv]

India is the world’s third-largest carbon emitter accounting for 6.6 percent of global carbon dioxide emissions. As part of its commitments to the Paris agreement, India plans to reduce its carbon emission intensity (carbon emissions per unit of GDP) by 33 to 35 percent from 2005 levels by 2030.[v] Also, by 2030, India intends to generate 40 percent of its electricity from non-fossil fuels.

India is building nuclear capacity along with solar and wind. India’s nuclear power capacity totals 6,780 megawatts. Nine additional reactors are at various stages of implementation and are expected to add an additional 6,700 megawatts over the next seven years. Another 16 new reactors with a total capacity of 16,100 megawatts are in the planning stages, and are dependent on cost, technology adaptation and safety.[vi]

Despite its intent to increase its non-fossil generation to 40 percent, coal is primarily used today and will continue to be used in the future. India has plans to build nearly 370 coal-fired power plants.[vii] Between 2006 and 2016, 139 gigawatts of coal-fired capacity was brought on-line. A record 21 gigawatts of new coal capacity was built in 2015, and almost another 18 gigawatts in 2016.[viii] The planned construction of an additional 178 gigawatts would make it nearly impossible for India to meet its climate promises. By developing all of the planned coal-fired capacity, India would increase its coal generating capacity by 123 percent.[ix]

India’s reliance on coal is due to its vast coal reserves, estimated at 87 billion metric tons. In mid-2016, coal capacity made up 63 percent of India’s electricity capacity. Low-carbon sources, including nuclear, made up 28 percent.[x] 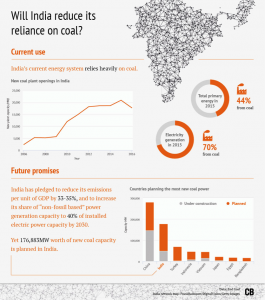 Many countries are continuing to build coal-fired power plants (e.g. China, India, Pakistan, some European countries) and yet the United States is not allowed to build any due to the Obama Administration’s Clean Power Plan. Without carbon capture and sequestration technology that is not economically viable today, no coal-fired plant can meet the carbon dioxide emissions standard in the Clean Power Plan. President Trump has asked Scott Pruitt, Administrator of the Environmental Protection Agency, to overturn the Clean Power Plan, but that rule is ex-President Obama’s signature policy for meeting the U.S. commitments he made to reduce greenhouse gas emissions by 26 to 28 percent by 2030 (from 2005 levels) under the Paris Accord. Clearly, if Obama’s climate legacy remains, the United States will be without new coal plants and will be facing a dying coal industry while other countries use coal to improve their economies and provide power to their people.

[i] MIT Technology Review, Why India and Pakistan Are Renewing Their Love Affair with Coal, May 3, 2017, https://www.technologyreview.com/s/604323/india-and-pakistans-continued-love-affair-with-coal/

[v] The Better India, India Ratifies the Paris Climate Agreement. This is What It Means!, October 4, 2016, http://www.thebetterindia.com/70499/paris-agreement-india-united-nations-convention/

The Philosophic Roots of the Paris Agreement Part I: Deep Ecology vs. Human Progress