What is the CDM? And, why is China benefiting from it? As a way to reduce greenhouse gas (GHG) emissions at lower cost, the creators of the Kyoto Protocol devised the Clean Development Mechanism (CDM). The CDM allows net GHG emissions to be reduced at a lower global cost by financing emissions reduction projects in developing countries where costs are lower than in industrialized countries. China has been the major beneficiary of the program, having received funding for projects that represent almost 64 percent of the registered Certified Emissions Reductions (CER), totalling 619,078,094 metric tons of carbon dioxide annually. These CDM projects will help China towards its goal of producing 15 percent of its energy from “clean energy” by 2020. However, the CDM designers are not getting the reductions they have paid for because many of China’s wind units are not connected to the electricity grid.

China has been benefiting from the CDM since the Kyoto Protocol came into force in 2005. Between 2005 and 2009, China received 35 percent of the 1800 CDM projects and 54 percent of the CERs. Now, China’s share of the CERs is higher at 63.97 percent. As recent as May of this year, China’s National Development and Reform Commission (NDRC) approved 57 wind power projects under the CDM directive. The country’s five major power companies accounted for 74 percent of the approved CDM projects.[i] 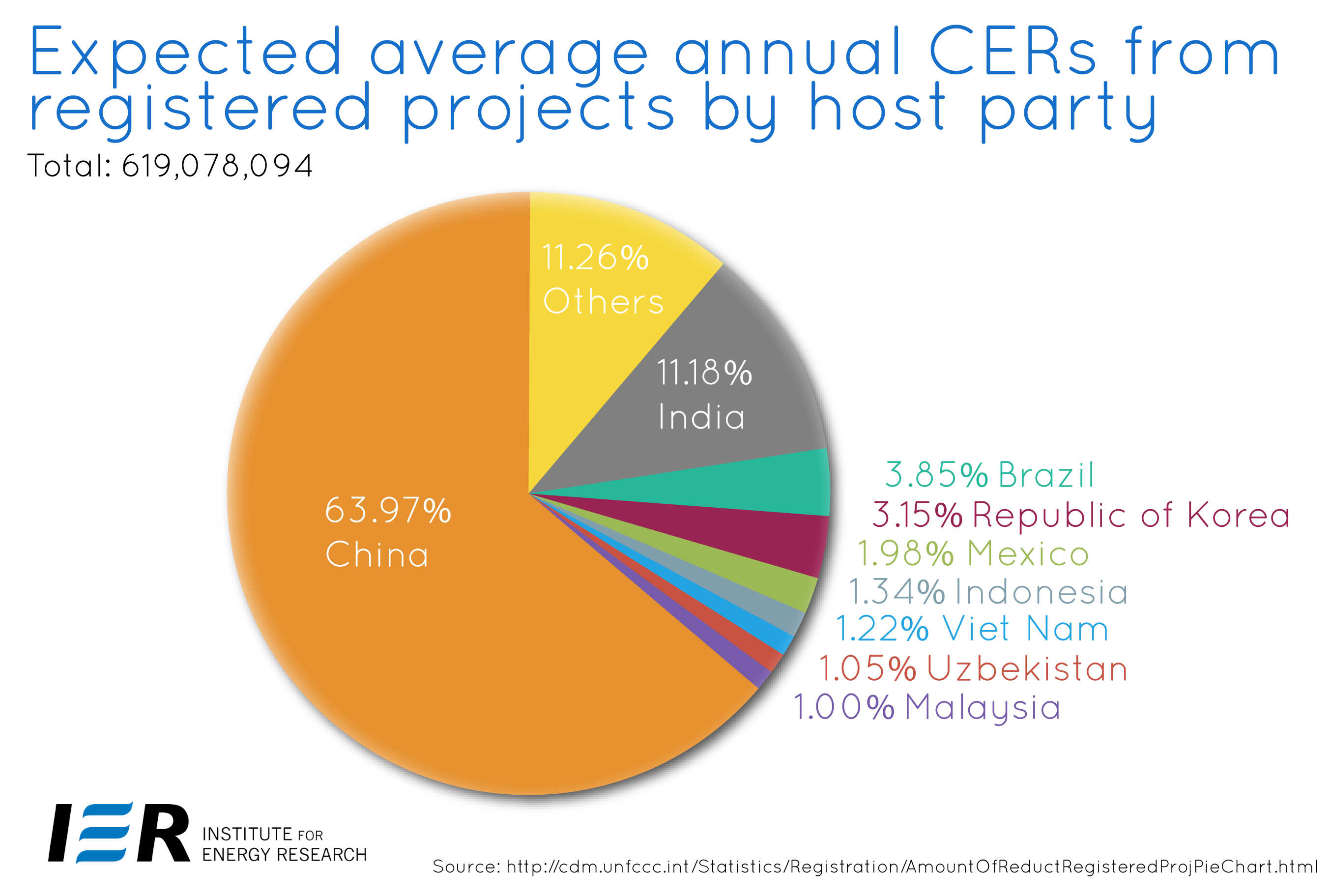 China not only benefits from wind projects under the CDM, but hydroelectric, solar and biomass power projects as well.  Of the recent projects submitted for registration for China, the vast majority are wind projects, about 70 percent, with hydropower projects coming in second at almost 20 percent. However, about 30 percent of China’s wind units are not connected to the country’s electric grid.

With so many of China’s “clean energy” projects covered by the CDM, it is not surprising that clean energy financing is led by China.  China’s clean energy investment surged 92 percent in the second quarter to $18.3 billion, according to Bloomberg New Energy Finance. [iii] China has been the biggest market for wind turbines for several years and has recently quadrupled its goals for solar installations. The International Energy Agency expects China to overtake Europe as the world’s top renewable energy growth market this year due partially to Europe’s economic downturn and maturing renewable energy markets.  The irony is, they’re being paid by the Europeans to do it.

Unlike the United States, China is building coal generating plants and increasing its consumption of coal to fuel its growing economy, as many other developing countries are doing. According to China’s National Bureau of Statistics, China’s coal consumption increased 9.7 percent in 2011 to a record 3.7 billion tons, more than 3.5 times the coal consumption of the United States. China’s total energy use increased 7 percent, the fastest growth in 4 years to fuel an increase in its gross domestic product of 9.2 percent. China does not worry about using coal, and will most likely be importing U.S. coal as the Obama Administration continues to slowly make it disappear as a generating fuel in the United States.[iv] 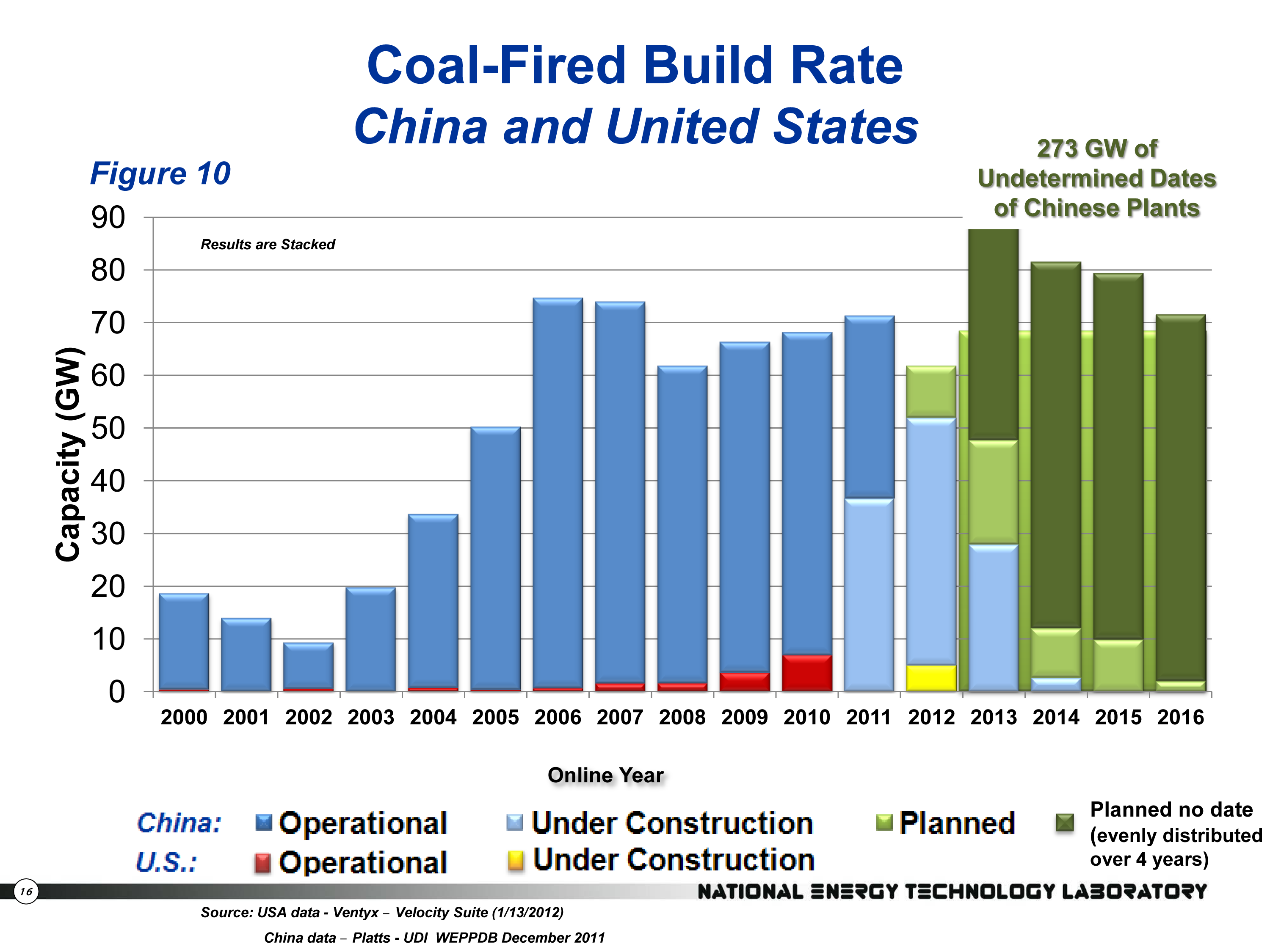 A team of scientists from China, Britain and the United States, analyzed two sets of energy data from China’s National Bureau of Statistics: one set covering the energy use of the nation, the other of its provinces. The team identified a 1.4-billion metric ton emission gap in 2010 between the two data sets, which is slightly more than the annual emissions of Japan.

According to Chinese national statistics, carbon dioxide emissions have been growing 7.5 percent annually between 1997 and 2010, but, according to the study, aggregated emissions of all Chinese provinces have increased at 8.5 percent over the same period. The discrepancy in these statistics is mainly due to differences in reported coal consumption and processing at the provincial level.

Yang Fuqiang, a former Chinese energy official and senior adviser for the Natural Resources Defense Council in Beijing, said provinces routinely underestimate both their carbon emissions and their energy utilization rates.”I would say the biggest concern about the accuracy and reliability of (China’s emissions) data is coal – and that comes from too many small coal mines supplying small enterprises and industrial plants. They have no monitoring systems and generally speaking, they are also avoiding tax,” he said.[v]

China is clearly the world’s largest user of coal by far and the world’s largest emitter of carbon dioxide emissions and it has no intention of changing that direction since it needs to fuel its growing economy and supply electricity to its population, many of whom are still without power. While they publicly display concerns over carbon dioxide, their actions speak louder than their words and those actions include the greatest energy construction boom in history, led by coal.  The country also intends to take advantage of payments for “clean energy” projects that are provided under the CDM whether or not it has the transmission capacity to utilize those projects.  They clearly understand the importance of growing supplies of stable electricity to a modern economy that seeks to compete in the future.  Meanwhile, the OECD countries continue to struggle internally about the value of affordable, abundant and reliable supplies of electricity.