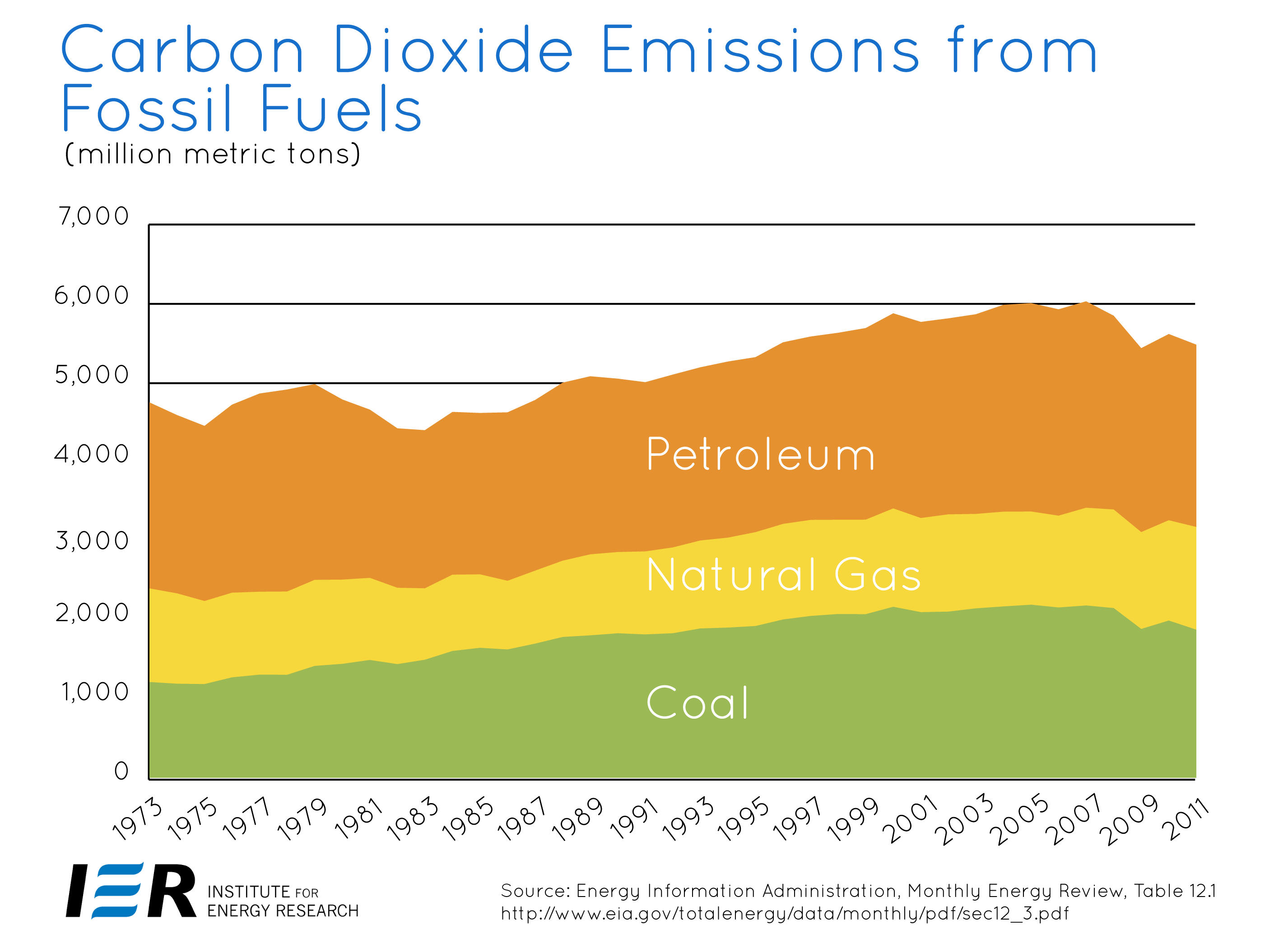 The U.S. economy grew by only 1.7 percent in 2011, which contributed to the decline in energy usage of 0.5 percent. Energy intensity (energy consumption per dollar of gross domestic product) also declined—by 2.1 percent in 2011, indicating that we are using less energy to fuel our economy.

In 2011, total carbon dioxide emissions from fossil fuels were 5,472 million metric tons, of which 34 percent was from coal, 24 percent from natural gas, and 42 percent from petroleum. Carbon dioxide emissions from petroleum declined by 2.1 percent in 2011 as a poor economy, high oil prices, and increased use of biofuels resulted in a drop in petroleum consumption of 1.8 percent. 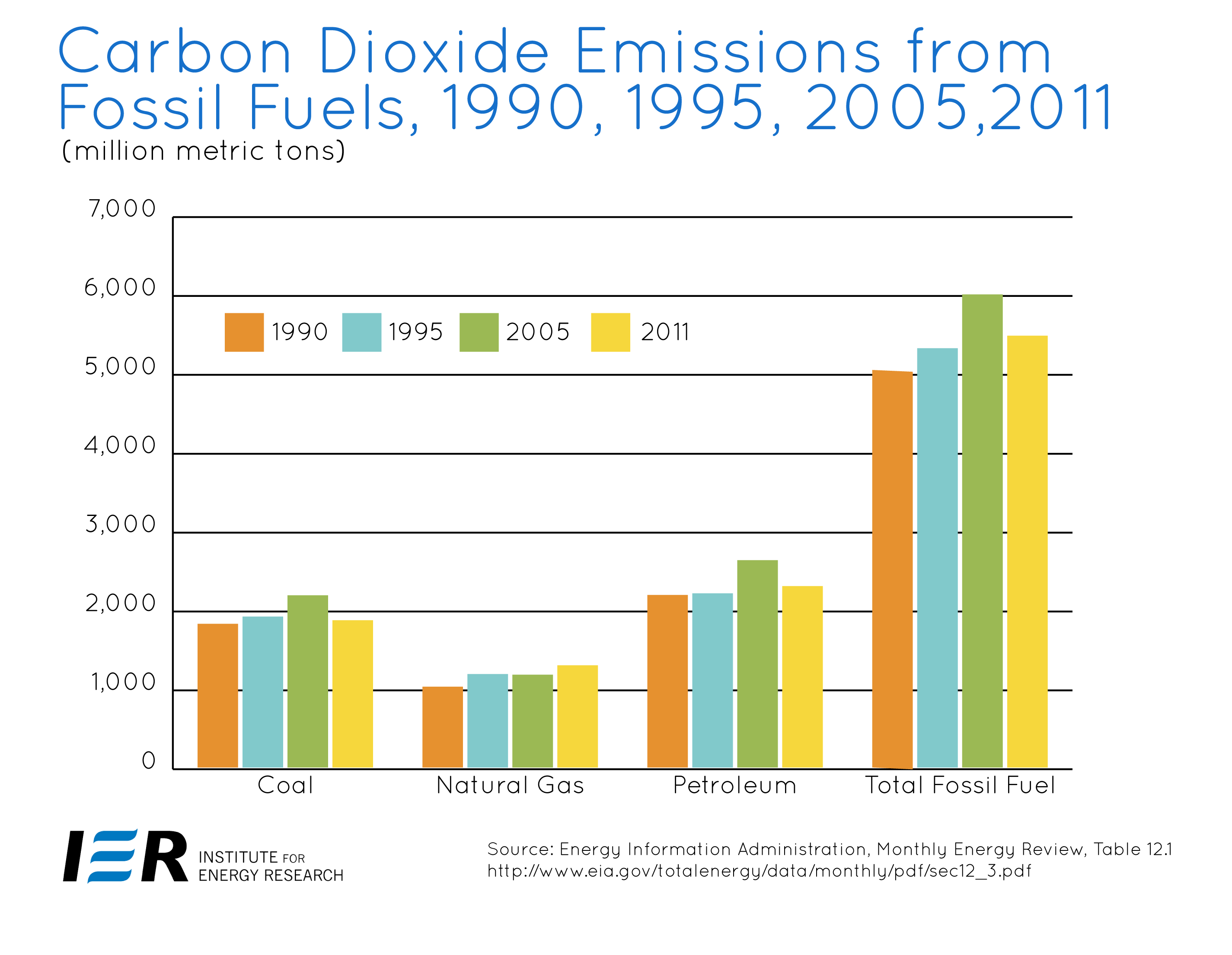 Besides increased natural gas usage in the electricity sector, increases in generation from renewable energy sources also helped to lower emissions in 2011. Renewable generation was 21.7 percent higher in 2011 than in 2010, led by hydroelectric power, whose generation levels increased almost 25 percent due to good precipitation and water run-off. Wind was second in increased generation levels, up by 26.5 percent, contributing 25 billion kilowatt hours more electricity compared to hydroelectric power’s increase of almost 65 billion kilowatt hours.

Europe vs. the U.S. Regarding Carbon Mitigation

Coal consumption in Europe grew by 3.3 percent in 2011 due to a glut of European Trading Scheme (ETS) emission allowances that made coal the most profitable electric power fuel. In contrast to the increased use of natural gas for generation in the United States, Europe’s use of natural gas fell by 2.1 percent in 2011 as gas-fired plants became increasingly uncompetitive. Because natural gas emits half the carbon dioxide of coal, its consumers need only half the number of carbon permits as coal. Due to the glut, carbon allowance prices in Europe dropped to 8 euros a tonne—a decline of 17 percent. Natural gas prices are high in Europe because of the EU’s dependence on natural gas from Russia and liquefied natural gas supplies outside of Europe. Natural gas has become so expensive there that the major generators are considering shutting down their gas-fired plants by 2015, making coal the only viable alternative.[ii] 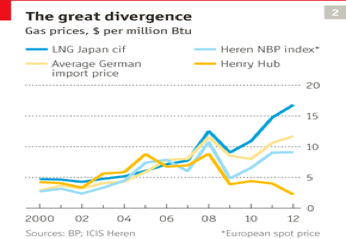 Why isn’t Europe developing its own shale gas resources and emulating the U.S. success of inexpensive natural gas production? For instance, according to the Energy Information Administration, France has 180 trillion cubic feet of shale gas resources.[iii] In the EU’s wisdom of meeting their carbon goal for 2020, they have banned hydraulic fracturing in favor of the green lobbies’ wishes. Europe’s socialism that imposed cap-and-trade restrictions making its industries less globally competitive is now experiencing a coal boom. On the other hand, American capitalism has achieved technological innovation in hydraulic fracturing, lowered energy prices for natural gas, reduced dependence on foreign energy imports, and raised the prospect of energy independence in the future.