Renewable energy supporters have been emphatic in calling for the United States government to provide subsidies comparable to those offered by foreign “competitors,” yet it is worth noting that the foreign experience with renewable energy subsidies has not led to especially effective results. One of the most striking examples is Germany—the world’s largest solar power producer whose energy industry is facing serious economic problems now that the German government is imposing massive cuts to its solar subsidies.

In 1990, Germany enacted a feed-in tariff law that requires utilities to purchase electricity generated with renewable electricity at a fixed price that is guaranteed for 20 years. These subsidies, which were then boosted in 2000 and 2004, led to Germany becoming the world leader in solar power.  However, after the initial growth that led the country to become the world’s first solar energy producer, today its solar manufacturing and production industry is crashing rapidly due to cuts in these generous subsidies.[i]

In February of this year, the German government announced drastic new cuts to the country’s solar incentives. After several months of heated discussion, the German Bundestag (the lower house of the country’s parliament) approved 20 to 30 percent subsidy reductions, depending on the size of the solar energy system.[ii] These subsidy reductions, the first of which began in 2009, have hit the country’s solar industry hard—since December of last year, over a half dozen German solar manufacturers have declared bankruptcy.[iii] These are likely just the first of many, as the country intends to phase all solar subsidies out by 2017.

Apart from the fact that enacting massive solar subsidies was a controversial decision for a rather cloudy country, as solar power is intermittent and works only when the sun shines, providing large subsidies for an industry over an extended period of time removed many of the incentives that influence whether a business succeeds or fails in the market. Namely, analysts attempting to determine the reasons why Germany’s solar experiment has floundered have noted that the solar industry increasingly relied on governmental funding, rather than pursuing innovations to improve their product and cut production costs.[iv]

Most importantly, Germany’s solar subsidies have been expensive with little evidence to prove they are worth the cost.  Last year, over €8 billion ($10.2 billion) was paid out to German solar farm operators and homeowners with solar panels, but only 3.3 of the country’s power supply was generated by solar in the same time period.[v]

Two decades of highly-subsidized renewable energy have had a noticeable effect on the country’s electricity prices. Currently, Germany’s solar feed-in tariffs vary from $0.166 per kWh on the low end to $0.297 per kWh on the high end, which makes it $0.2315 per kWh on average.[vi] This represents a large portion of the price of residential electricity: an average customer in Germany pays about $0.3523 per kWh (€0.2781) of electricity used.[vii]

Those who believe that the United States should emulate Germany’s model should consider the following: 35 cents per kWh for electricity is three times as much as U.S. customers paid on average for electricity last year (11.8 cents per kWh).[viii]Germany’s solar feed-in tariff alone is 41-152% greater than US total residential electricity rates.  Germans also have the 2nd highest electricity prices in Europe—outdone only by wind-dependent Denmark—and this situation will inevitably be made worse by the fact that Germany has pledged to phase out nuclear energy and become more reliant on renewable energy sources.[ix] 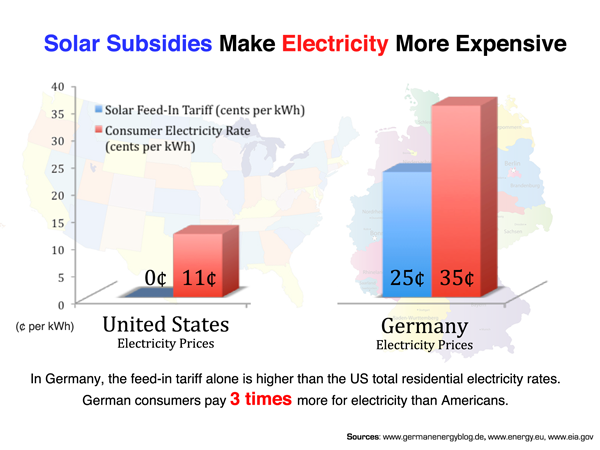 Germany is not an isolated case. Similarly lavish subsidies to the renewable energy sector have been made by the Spanish government since the mid-2000s. In the summer of 2007, the Spanish government offered its most generous premium payments for solar power yet—58 cents per kWh—which made it possible for virtually any solar power producer to turn a profit.[x] Because the subsidies were so lavish, producers rushed into the solar business faster than the Spanish government expected, with some solar plants set up so hastily and designed so poorly that they could not compete with conventional power producers in terms of cost-effectiveness.

The results in Spain were even more stark than in Germany: a study conducted in 2009 found that for every 1 “green” job that Spain created, 2.2 jobs were destroyed elsewhere.[xi] Additionally, there is about 40 billion euros (49 billion dollars) of wind and solar power-related debt in Spain, most of which is owned by local banks.[xii] As a result of this rapid escalating debt, Spain placed a moratorium on all new renewable energy spending in January of this year.[xiii]

Affordable energy is essential to economic growth, and examples like Germany and Spain underscore how government attempts to pick winners and losers inevitably come at a cost.  Repeating the same mistakes in the United States would be even more economically disastrous, especially considering the fact that it possesses a vast wealth of natural resources.  Allowing the market to determine how these resources can be used most efficiently will ensure that Americans will continue to have reliable energy that won’t come at a premium.