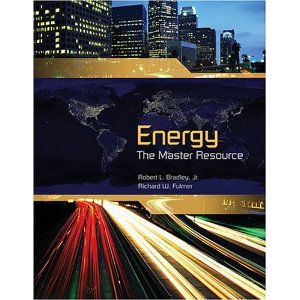 Energy-policy debates rage in Washington D.C. and other capitals around the world. Tax policy, resource access on government land, quotas for specific (uneconomic) supply alterntives, mandates on efficiency–all are so important because energy is the resource of resources, the master resource.

Policymakers and students of the energy debate should step back periodically to revisit first principles where agreement between warring factions is broad. Affordable, reliable, plentiful energy is a bedrock of industrial life and a byproduct of free-market reliance.

Indeed, critics of the consumer-driven (versus politically driven) energy market have ceded as much. John Holdren, for example, Obama’s current science advisor, and a foe of the carbon-based energy economy, has stated: “A reliable and affordable supply of energy is absolutely critical to maintaining and expanding economic prosperity where such prosperity already exists and to creating it where it does not.”[1]

The availability of “cheap” energy also made possible the development of powerful farm machinery, and abundant oil and gas allowed development of synthetic fertilizers, pesticides, and other products to boost crop yields (production per acre) considerably above those achieved with traditional methods. Similarly, we can thank fossil energy for facilitating the production of many useful goods and for stimulating unprecedented rapid expansion of economies and of food production. In effect, fossil energy facilitated the population explosion of the twentieth century.[2]

But Holdren et al. find themselves in a quandary by advocating higher prices for the most utilitarian of energies in the name of saving the planet (or some other catch phrase of sustainable development). For making the workhorse energies of oil, gas, and coal more expensive in the name of “sustainability” hurts the very people and groups that anti-market environmentalists purportedly want to help in the long run through environmental gains.

Is it time for John Holdren to advise President Obama as to why political approaches to energy are as unsuccessful now as they were in the 1970s under President Carter? And if not, is it time for Obama to listen to new voices when it comes to the master resource?

[1] John Holdren, “Memorandum to the President: The Energy-Climate Challenge,” in Donald Kennedy and John Riggs, eds., U.S. Policy and the Global Environment: Memos to the President. Washington, D.C.: The Aspen Institute, 2000, p. 21.