Exxon released its global long term energy forecast to 2040 recently forecasting worldwide growth in energy demand that helps to improve the living standards of billions of people in developing countries and a continuation of an abundant supply in fossil fuels that dominate the worldwide supply picture despite increases in renewable energy.[i] Exxon expects world energy demand to grow 35 percent by 2040 as electricity and other energy sources reach people in the developing world who live without power or burn wood and even animal waste for cooking and heating. Those growing needs are expected to be somewhat offset by a slow decline in consumption in the developed countries in part due to an average projected economic growth rate of less than half that projected for the developing world. One key assumption that Exxon assumes is an $80 per metric ton implicit tax on carbon dioxide emissions by 2040.[1]

According to the forecast, fossil fuels will still supply most of the world’s demand and remain abundant with oil and natural gas supplying 60 percent of demand in 2040. The demand for oil and natural gas will continue to increase as shippers and truckers need diesel to move goods and utilities need natural gas to produce electricity for people particularly in developing countries. Liquid fuels—gasoline, diesel, jet fuel, and fuel oil—will remain the primary transportation fuels because of their unique combination of affordability, availability, portability, and high energy density.

Exxon’s $80 per metric ton implicit tax on carbon dioxide emissions means that Exxon, which has large natural gas holdings, predicts that by 2040 the world will consume 40 percent more energy from natural gas than coal.  This forecast is in contrast to the International Energy Agency’s prediction that global coal consumption will outstrip both oil and natural gas by as early as 2017 owing to the growing coal consumption in the developing world. Coal, currently the second most consumed fuel after oil, is expected by Exxon to level off and fall to third place by 2025 as countries displace it with less carbon intensive natural gas.

Nuclear power and renewable electricity sources such as wind, solar and biofuels will grow at the fastest percentage rate, but will contribute only a small share to the energy mix by 2040 because of their cost. 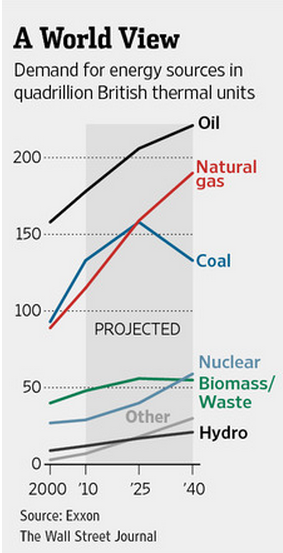 As noted above, Exxon assumes an implicit carbon tax of $80 per ton of carbon dioxide when considering investment in new technologies or projects.  The implicit carbon tax will raise the cost of energy that will lead to large gains in energy efficiency that are already influenced by corporate average fuel efficiency standards for automobiles and building codes and appliance standards for homes and businesses. Due to more expensive energy, energy-related carbon dioxide emissions are expected to plateau around 2030 and begin a slow decline.  Economic growth rates are also expected to be lower than they have been historically. 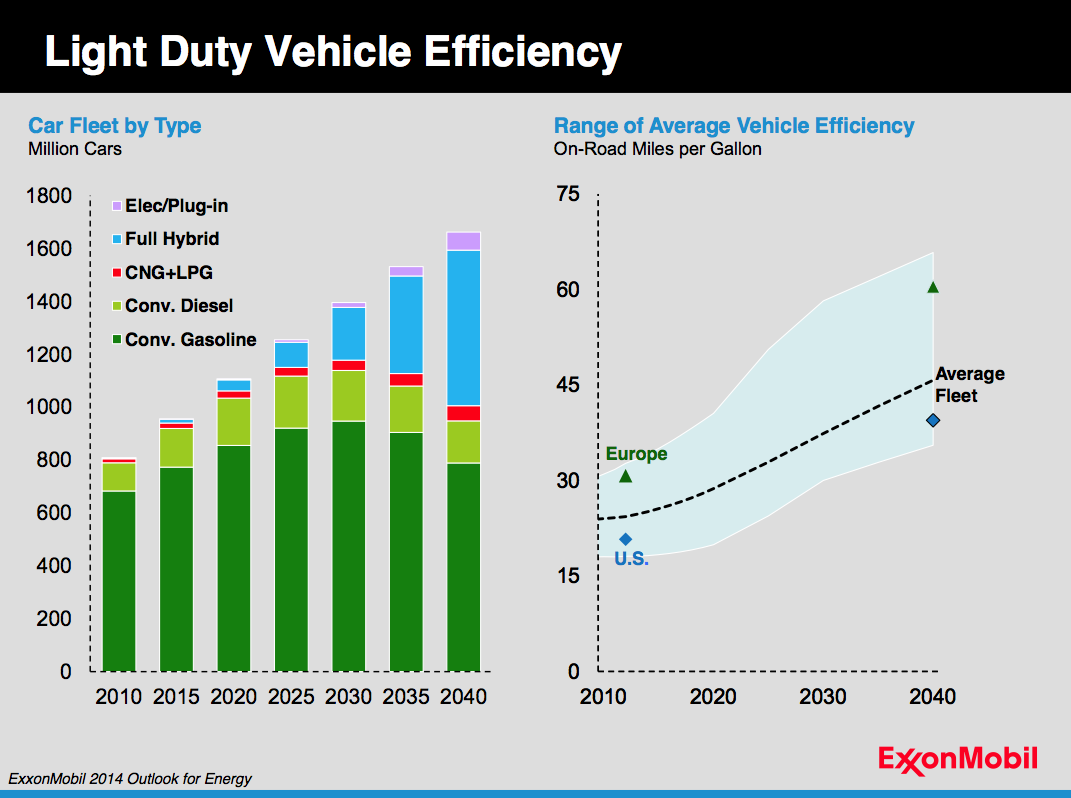 Oil and Other Liquid Fuels

Exxon estimates that 65 percent of the world’s recoverable crude oil will still be in the ground in 2040. But because that oil will be harder to develop and produce, it will be more expensive, even with technological advances for deepwater production and for oil sands and tight oil production. Exxon expects technological innovations such as Arctic oil platforms that can withstand icebergs, and wells that extend seven miles to reach underwater crude deposits.

Crude oil demand is expected to increase by 25 percent due primarily to increased commercial transportation activity. 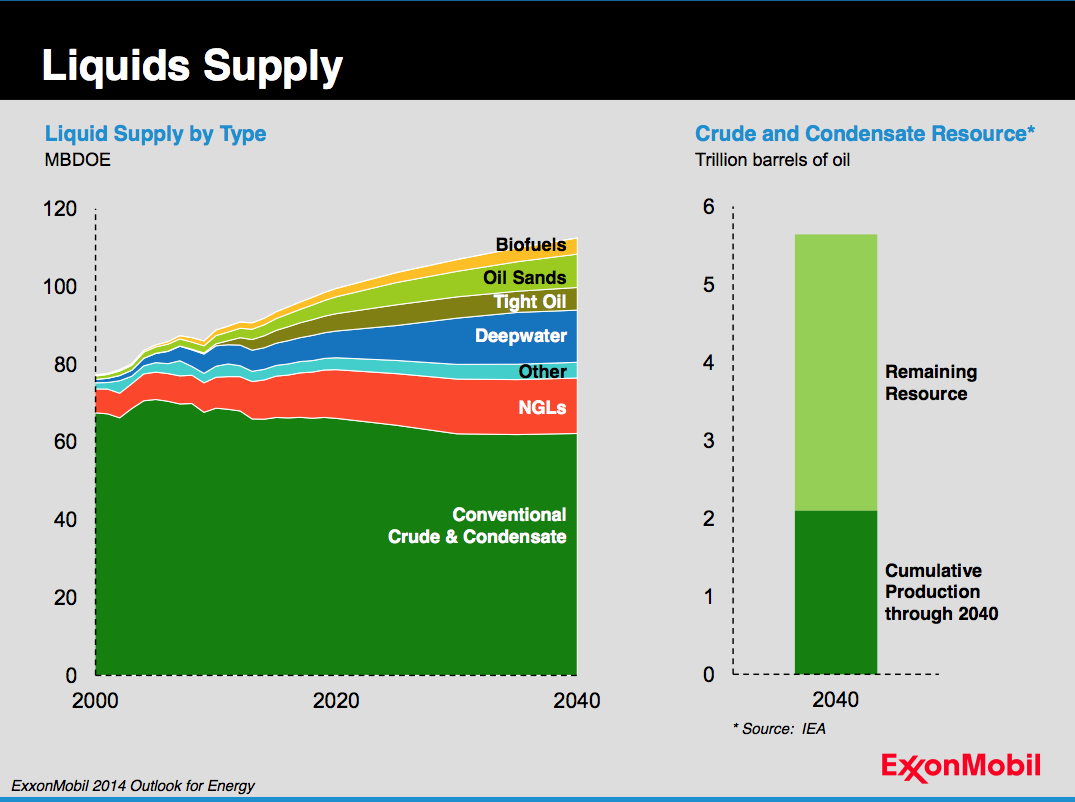 Natural gas is expected to be the fastest-growing major fuel source with demand increasing by about 65 percent by 2040. According to Exxon, the world has over 200 years of natural gas supplies. Unconventional gas currently accounts for 40 percent of the world’s resource base, and is expected to represent 65 percent of global gas production growth to 2040, supplying a third of the world’s gas supplies by 2040.

Almost all of natural gas’ projected demand growth will occur in developing countries to improve their industrialization. 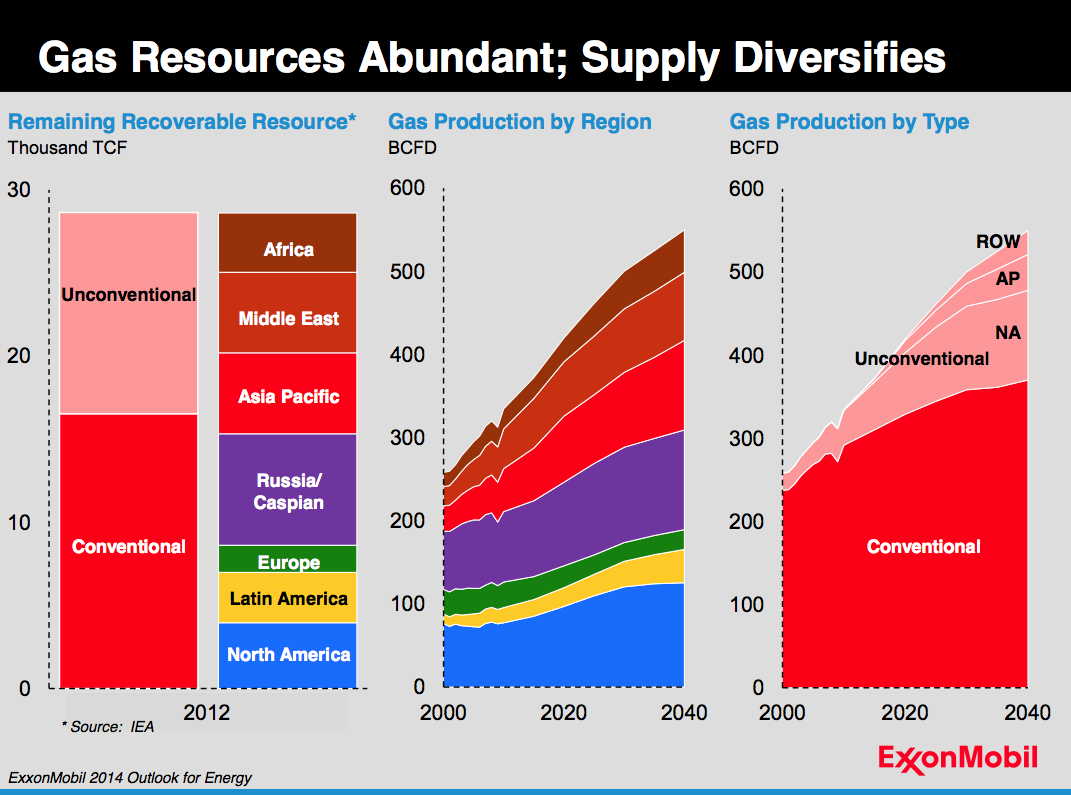 According to Exxon, 1.3 billion people lack access to electricity with Africa accounting for half that total. More than half of Africa’s population does not have electricity. Exxon expects that 85 percent of the forecasted increase in electricity generation will be to improve the living standards of these people.

In 2010, coal supplied 45 percent of the fuel for the world’s electricity—more than any other fuel source. Exxon expects coal use for electric generation to increase by 55 percent by 2040. But, despite that increase, Exxon predicts that coal will become the number 2 fuel for electric generation behind natural gas. Exxon predicts that natural gas demand for electric generation will increase by 80 percent by 2040. Natural gas and coal are the lowest-cost sources of power generation.  But, with a significant cost added to carbon dioxide emissions for investment purposes, coal-fired plants become less competitive in Exxon’s forecast. In 2040, Exxon expects coal to supply just 30 percent of the world’s generation.

The use of coal for electricity generation will vary by region. In many developing countries, such as India and in Southeast Asia, coal will likely continue to increase. In China, the world’s largest consumer of fuels for power generation, coal use is expected to continue to increase through 2025, and then to decline as the country increases its efforts to improve air quality and diversify its energy supply.  Exxon expects China to decrease its use of coal as a generation fuel from an 85 percent share in 2010 to 45 percent in 2040.

Exxon expects nuclear power to double by 2040, accounting for 8 percent of global supply, higher than its 5 percent share today. 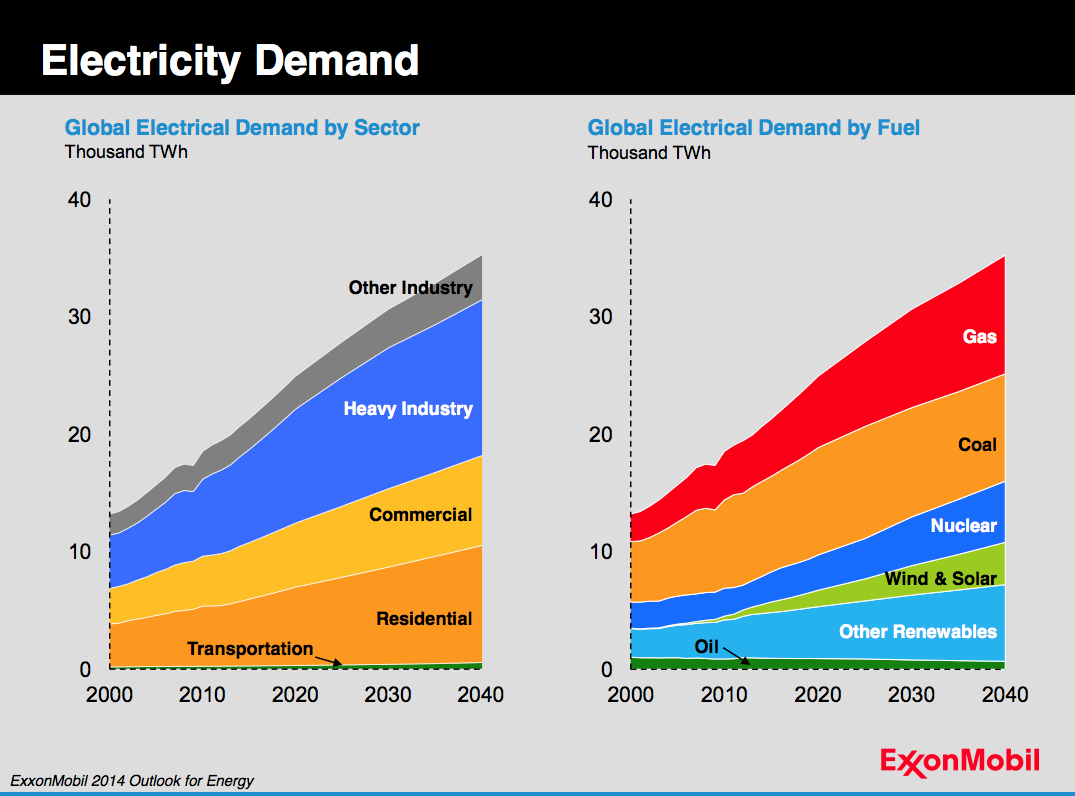 Renewable energy for electricity generation is expected to increase by about 150 percent, led by wind and hydroelectric power. Solar, wind and biofuels increase their share from 1 percent of supply today to 4 percent in 2040, even with an expected 5.9 percent a year average growth rate through 2040. Exxon assumes governments will continue to subsidize renewable energy in order to reach these numbers. 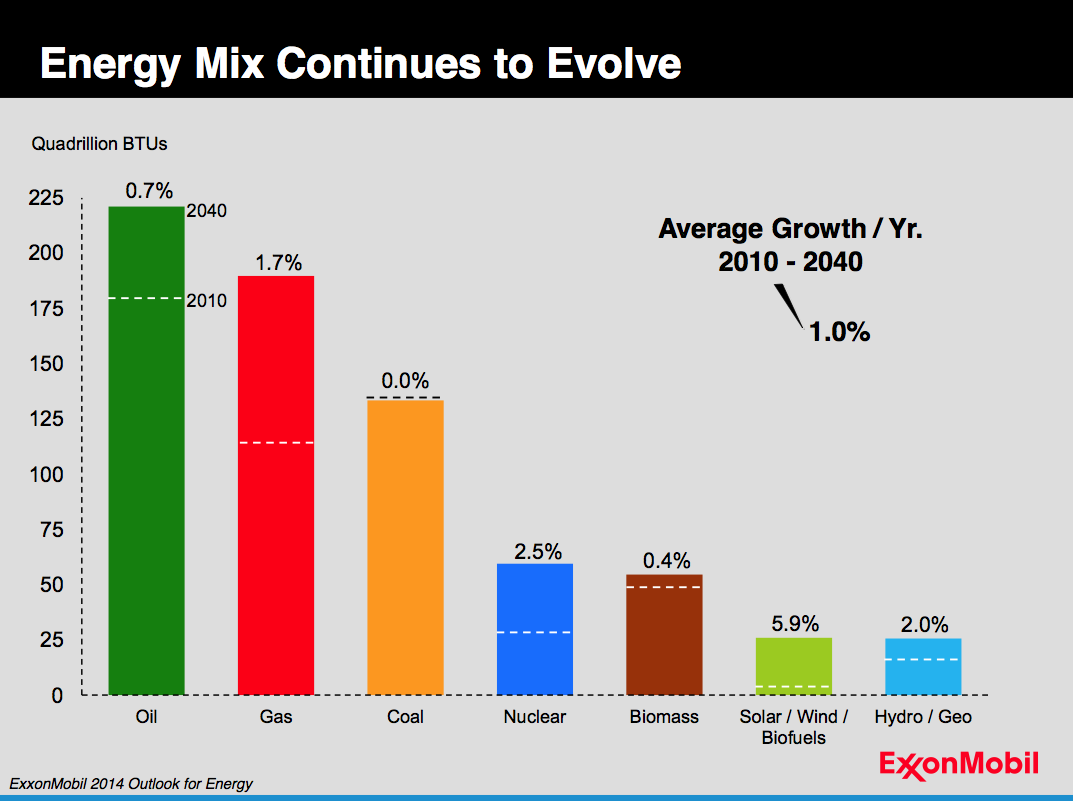 Exxon sees an evolving energy picture, but oil, coal, and natural gas will remain dominant due to their abundance, and their affordability and flexibility in meeting the world’s energy demand. Energy demand will increase as the world’s economies grow, population increases, and more people are provided modern energy to raise their standard of living. Exxon’s assumption of an $80 a metric ton implicit carbon tax means that in Exxon’s forecast, coal will drop from the second most popular fuel to third place, making way for natural gas’ rise. Nuclear and renewable energy increase at the fastest rates, but supply a small share of the world’s energy in 2040.

[1] Here how Exxon explains their implicit tax on carbon dioxide emissions: “To help model the potential impacts of a broad mosaic of future GHG policies, we use a simple cost of carbon as a proxy mechanism. For example, in most OECD nations, we assume an implied cost of CO2 emissions that will reach about $80 per tonne in 2040. OECD nations are likely to continue to lead the way in adopting these policies, with developing nations gradually following, led by China.”

[i] ExxonMobil, The Outlook for Energy: A View to 2040  2014, December 2013, http://corporate.exxonmobil.com/en/energy/energy-outlook/download-the-report/download-the-outlook-for-energy-report