Hawaii has the highest electricity prices in the country and receives a lot of sun. As a result, from 2008–2011, the number of annual rooftop solar installations increased 900 percent and, until recently, showed little sign of slowing. That all changed earlier this year when new rules took effect requiring utility approval before residential solar panels could be connected to the electric grid. 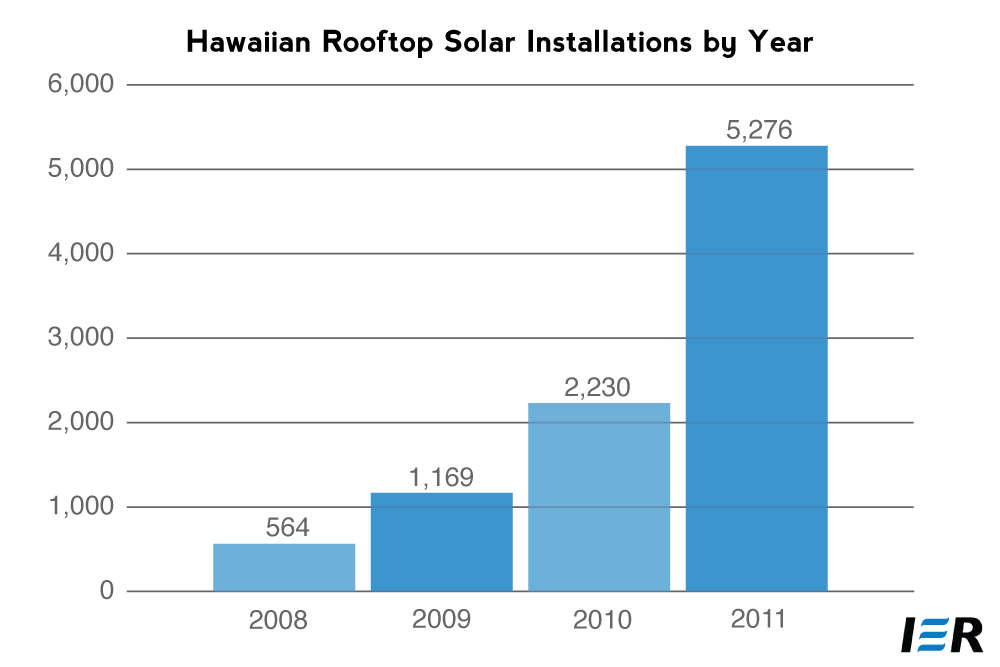 Hawaii should be the ideal locale for solar adoption. Not only is the state’s warm but temperate and sunny climate perfect for maximizing the efficiency of solar panels, but Hawaii has high electricity prices. Due to Hawaii’s unique geography, petroleum produces the majority of electricity on the islands. Because petroleum is expensive as a fuel for electricity, Hawaii suffers from the highest electricity prices in the country.

The challenge for solar adoption in Hawaii is its electrical grid, which was built with the goal of supplying reliable, centralized, controlled energy. Introducing large amounts of solar energy from rooftop systems onto the grid is proving to be a significant issue that is raising concerns about its viability.

One of the biggest challenges for utilities is the simple fact that electricity supply must match electricity demand at all times because storage of electricity is so far not possible on a utility scale. The intermittent nature of rooftop solar makes this increasingly difficult, as power enters the grid when the sun shines but is not consumed by the owner. Oahu has nearly 200 megawatts of installed solar panels that the utility is struggling to effectively manage. “It’s almost like you have a 200 MW power plant…and you don’t know what it’s going to do,” said Hawaiian Electric executive Scott Seu.

In September, new rules were implemented that aimed to manage the dramatic increase in rooftop solar installations throughout the island. The rule requires homeowners in Oahu to get approval from their local utility before placing panels on their roof. The problem is that in about 25 percent of Oahu, local utility, Hawaiian Electric Company’s, power circuits have effectively maxed out their ability to safely accommodate more residential solar power. The utility warns that at the current rate of adoption, all circuits controlled by Hawaiian Electric would be at capacity for residential solar within six months. Adding more to the already taxed system could lead to voltage spikes that damage homes and appliances or put the safety of utility employees at risk. By 2014, almost 10 percent of the utility’s customers will be equipped with solar panels, and the electrical grid is feeling the effects.

This high concentration of solar customers means that Hawaii is already experiencing the challenges of integrating intermittent renewables onto the electrical grid, but these challenges are spreading across the country as solar adoption increases.  “The Grid was not built for renewables,” Trieu Mai, a senior analyst at the National Renewable Energy Laboratory, told the L.A. Times.  Some officials fear we are nearing a point where grid operators pay renewable energy providers NOT to produce power. Even the pro-subsidy solar advocate, Sierra Club, recognizes that the current expansion of solar energy in Hawaii is impacting the grid and is neither fair nor equitable. “The goal is make sure more renewable energy can come online, and to develop a way to pay for it that is “fair and equitable” for all customers,” said Robert Harris, executive director of Sierra Club Hawaii.

While much of Hawaii is reaching its limit to safely operate without investment and upgrades to the grid, the rest of the country is considering how to prepare for the future.  A report by scholars at Caltech estimate that $1 trillion dollars of investment will be needed by 2030 to keep the grid up to date, much of this investment will be related to measures required to accommodate intermittent sources such as wind and solar.  Those costs will be mean higher electricity rates for consumers across the country.

As Hawaii works to solve its issues with residential solar power, it’s obvious that solutions will be costly. Whether it’s addressing problems with net metering pricing structures, the reliability of renewable energy on a large scale, or the effect of growth on the current electrical grid, expanding renewable energy will come at a high cost.

Ultimately, decision-makers may want to pause and assess the consequences of actions that require more intermittent sources of energy and result in instability requiring further additional expense to overcome.  In the real world, this is known as the “if it ain’t broke, don’t fix it” solution used by most of the American public.