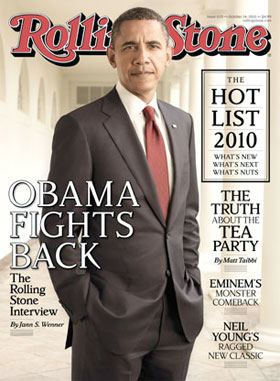 Rolling Stone magazine just pulled off another coup with the Obama Administration by landing an interview with President Barack Obama which included his insights on energy.  Unfortunately, his insights as disclosed in the lengthy piece are neither insightful nor inspiring, but simply more of the sky-is-falling, government-needs-to-do-more, we-need-to-make-energy-more-expensive nonsense that has characterized Washington’s approach to energy for the last several decades.  It seems the president’s outlook on our future is more informed by the lyrics of the magazine’s namesake song than the powerful message of American exceptionalism that was demonstrated in both word and deed in Reagan’s vision of the “Shining City on the Hill.”  In fact, his policies are seeking to turn off the lights in the Shining City on the Hill.

For example, he insists on making energy more expensive for consumers and businesses, when he says “One of my top priorities next year is to have an energy policy that begins to address all facets of our overreliance on fossil fuels. We may end up having to do it in chunks, as opposed to some sort of comprehensive omnibus legislation. But we’re going to stay on this because it is good for our economy, it’s good for our national security, and, ultimately, it’s good for our environment.” This is reminiscent of his famous description of his energy plan as making “electricity prices necessarily skyrocket.”

The president and his advisors “get” the importance of energy and its importance to economic growth.  In fact, his Energy Czar Carol Browner understands energy and technology quite well. But it is only now becoming clear that their vision of an America with less energy, more expensive energy and resulting “smart growth” is part of “spreading the wealth around.”  And while Americans can differ on whether that’s good economic policy at home, we had no idea he was talking about spreading the wealth around to other countries.  Because that is what’s happening on his watch. (note, you’ll have to scroll down to 157th on the list to see the US ranking)

Given the approach of the Administration to energy, maybe it’s appropriate at this time in history for a nation whose president once spoke of the Shining City on the Hill to now choose Rolling Stone to deliver the current occupant’s vision of our energy future.  After all, Dylan pretty much summed it up 45 years ago:

Once upon a time you dressed so fine
You threw the bums a dime in your prime, didn’t you ?
People’d call, say, “Beware doll, you’re bound to fall”
You thought they were all kiddin’ you
You used to laugh about
Everybody that was hangin’ out
Now you don’t talk so loud
Now you don’t seem so proud
About having to be scrounging for your next meal.

Lifting the Offshore Energy Ban, in Name Only

Obama Administration Keeps Offshore Moratorium in Place, Says Little About When Thousands will Get Back to Work in the Gulf, Alaska