The IEA is a part of the Organization for Economic Cooperation and Development (OECD), which represents the developed nations of the world. IEA’s subsidy study found that many developing countries artificially lower energy prices to their citizens, paying the difference from their government resources.[ii] These wealth transfers are differentiable from subsidies that are intended to support uneconomic energy sources such as wind and solar technologies toward commercialization. In contrast, the United States and other developed countries offer support to energy production in the form of tax credits, loan guarantees or use mandates, which are not included in IEA’s fossil fuel consumption subsidy calculations since they are directed towards production rather than consumption of the fuel. 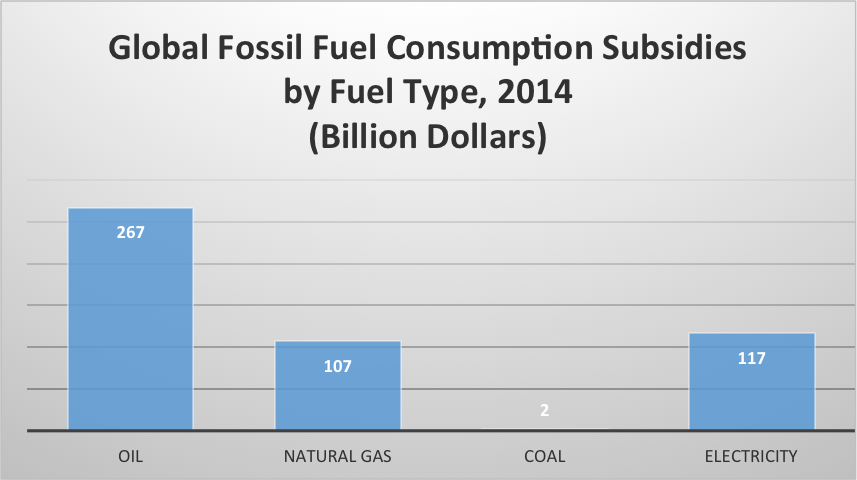 Coal received $2 billion in fossil fuel consumption subsidies, just 0.4 percent of the total. The countries that subsided coal in 2014 were Kazakhstan, Thailand, and the Republic of Korea.

Many of the countries providing fossil fuel consumption subsidies own state energy companies, including countries that comprise the Organization of Petroleum Exporting Countries, such as Iran, Saudi Arabia, and Venezuela. Net exporting countries see these subsidies as an opportunity cost.

Fossil fuel consumption subsidies are often used to alleviate energy poverty, but are an inefficient means for doing so, creating market distortions that result in wasteful energy consumption. 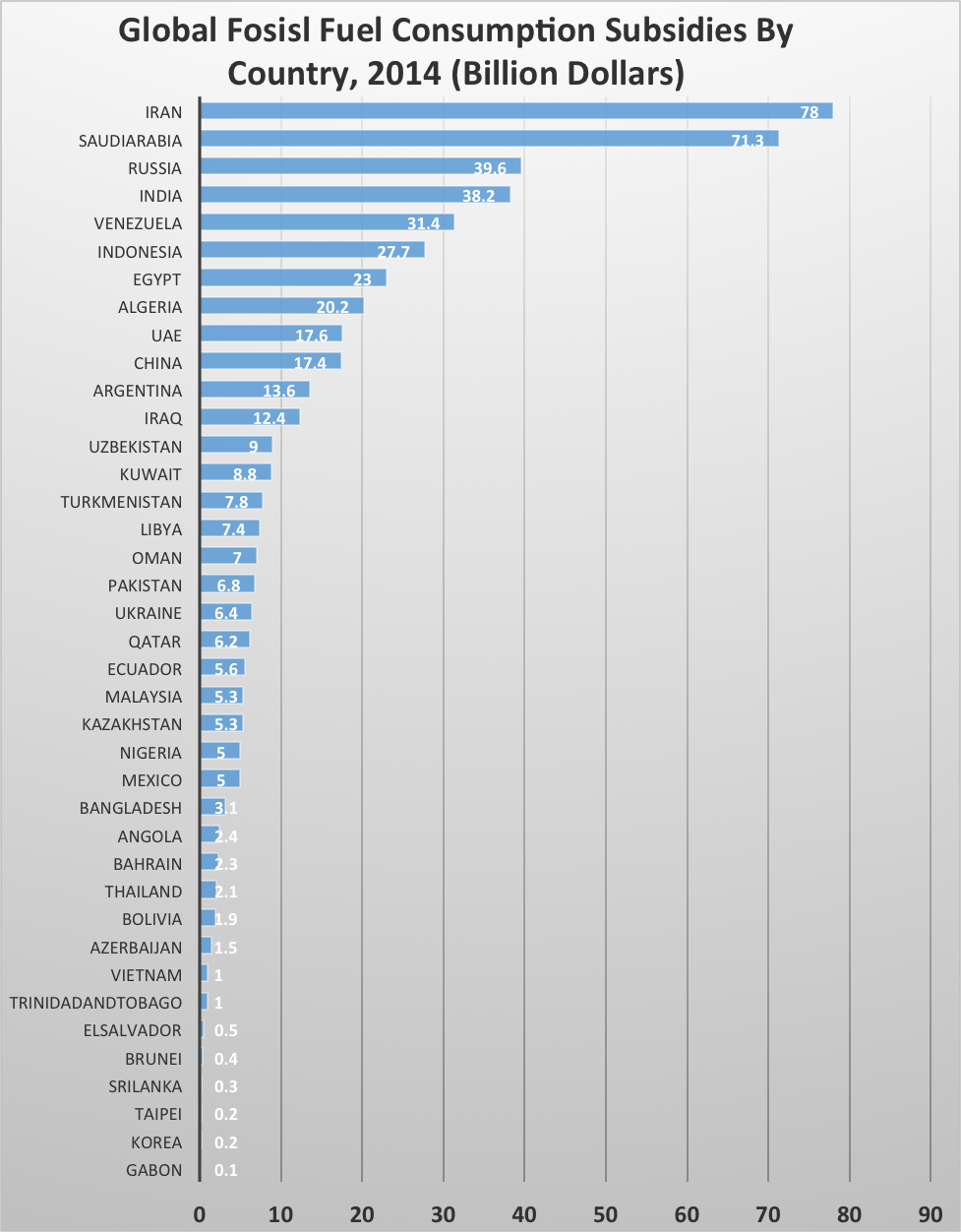 At the G20 summit in Hangzhou on September 4 and 5, President Obama pressed the leaders of major global economies to outline specific plans to phase out most fossil fuel subsidies. Prior to that meeting, the energy ministers from the G20 countries met, but did not reach an agreement on a timeline for the subsidy phase-out. But, the G7 nations (including the United States, United Kingdom, Canada, France, Germany, Italy and Japan, as well as the European Union) met in May, agreeing to end most “inefficient” fossil fuel subsidies by 2025.[iii]

Saudi Arabia, Russia and China oppose the elimination of fossil fuel subsidies. The royal Saudi government is inextricably linked with state-owned Saudi Aramco, the world’s largest energy company. Despite that, Saudi Arabia scaled back some fossil fuel consumption subsidies that artificially lowered the price of fuel for its citizens, increasing its country’s gasoline prices by 50 percent last year. Bahrain raised gas prices for its residents by 56 percent and Qatar by 30 percent, although their subsidized rates are still well below market levels. Oil consumption in the Middle East has grown nearly 4 times faster than the global average, partly because subsidized gasoline is so inexpensive. Russia, one of the world’s largest oil producers, is dependent on oil and gas industry revenue for half of its federal budget, and is unlikely to eliminate its fossil fuel subsidies.[iv]

Since 2010, the Obama administration put forward 11 proposals to eliminate what they say are subsidies for the exploration, development, and extraction of fossil fuels. These incentives are production incentives (e.g. tax credits) not consumption incentives that alter the market price of the fuel. Of the 16 policies that the Obama Administration marked for elimination, all but three indicated that the “United States Congress must pass enabling legislation for this proposal to become law”. None of President Obama’s proposals have passed the House of Representatives.

The Obama Administration’s self-assessment identified $8.2 billion in U.S. fossil fuel subsidies/incentives, categorizing $4.8 billion as inefficient. The remainder ($3.4 billion) is part of the Low Income Home Energy Assistance Program (LIHEAP) providing assistance to low income residential consumers and was not marked for reform. President Obama’s self-assessment resulted in a much larger set of U.S. fossil fuel subsidies than the OECD has estimated for the United States totaling $4.2 billion (including the LIHEAP).[v]

Fossil fuel consumption subsidies in developing countries are welfare transfers that can be differentiated from subsidies in the name of commercializing or sustaining uneconomic energy sources such as on-grid wind or solar, which the United States and other industrialized countries have been subsidizing. These latter forms of energy subsidies that help promote production of uneconomic energy sources can be abolished without detrimental effects to the U.S. economy or its citizens. In fact, they would increase economic efficiency since by their very nature, they are generally more expensive than competing forms of energy.