One of the keys to Hillary Clinton’s energy agenda is to install more than 500 million solar panels by 2020 if she is elected. The question is, what would this cost with the latest figures?

The cost of Clinton’s solar plan

The United States currently has 22.9 gigawatts (GW) of solar capacity according to the Energy Information Administration (EIA). Clinton’s plan is to expand that to 140 GW by 2020. To put that in perspective, EIA projects that even if the Obama administration’s Clean Power Plan is upheld by the courts, the U.S. is only on pace to have 57 GW of solar capacity by 2020.[1] To achieve Clinton’s goal would require an additional 83 GW of installed solar capacity beyond EIA’s projection.

What would Clinton’s plan cost to go from 22.9 GW of installed solar capacity today to 140 GW in installed capacity in 2020? EIA estimates that new photovoltaic solar costs $2,480 per kilowatt (KW). There are 1 million KW in a GW. Therefore each new GW of solar costs $2.48 billion.

As noted above, Clinton’s goal calls for an additional 83 GW of installed solar capacity by 2020 and each GW costs $2.48 billion. This means that her plans cost $205.8 billion above the current projections including the costs of the Clean Power Plan:

Solar power imposes costs on the rest of the electrical grid

Even though $206 billion is a lot of money, this is an underestimate of the costs of Clinton’s half billion solar panel plan. This is because solar power imposes additional costs on the electrical grid because solar only produces electricity when the sun is shining. Solar produces electricity in the middle of the day, but as electricity use rises in the evening, solar declines and stops production. This means that solar power can cause low-cost baseload generation to curtail production during the middle of the day, only to need to start back up in the evening. This is inefficient and expensive.

Here’s a recent example from California. On September 21, 2016, photovoltaic solar power peaked at 12:06 in the afternoon at 6 GW. Peak demand, however was 35 GW at 4:34 pm. By 7 pm total solar production was 0.081 GW—for all intents and purposes, solar power had finished for the day. However, at 7 pm, Californians were still using 34 GWs of electricity. In other words at 7pm, solar power was no longer supplying the grid with electricity, but the grid was still near peak demand.

Here is a graphic from California ISO showing system demand and solar (and wind) production: 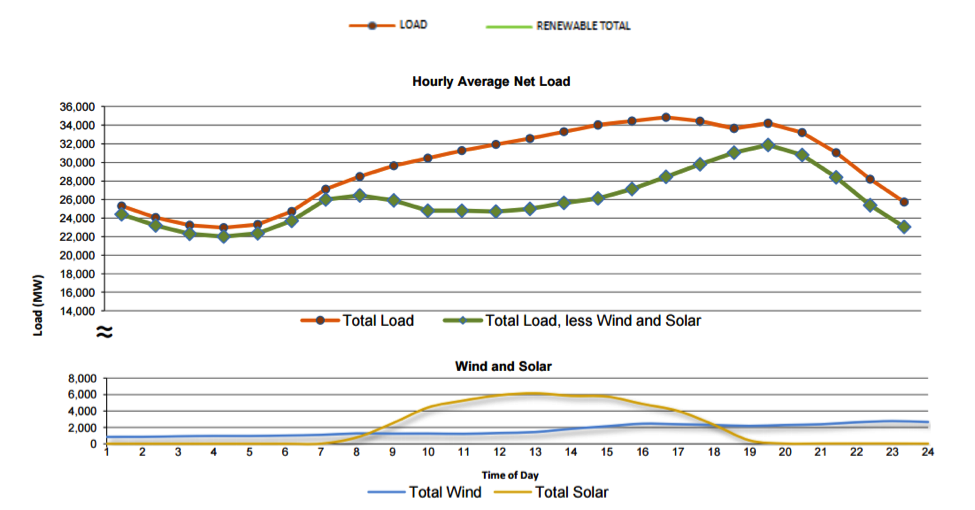 With solar unable to help meet demand near peak hours, that means that more peaking plants need to be used and peaking plants are expensive. If the solar build-out occurs in Clinton’s plan, more and more plants will be used inefficiently in the middle of the day—first turned off and then turned back on quickly as the sun is setting.

According to EIA’s Annual Energy Outlook (AEO) 2016, an additional 122 GWs of additional electrical generating capacity will be added by 2020 to replace 89 gigawatts of premature retirements due to the CPP and to satisfy new demand in the generating and end-use sectors. However, electric utilities already have plans to add natural gas and renewable capacity totaling 51 gigawatts. Thus, if Hillary Clinton’s plan is executed, the nation will be paying for additional capacity that is not needed just to reach a spurious goal. (See Table A9 of the AEO 2016 at http://www.eia.gov/forecasts/aeo/pdf/appa.pdf.)

As we have previously explained, China dominates solar panel production. In 2014, China provided 57 percent of our imported photovoltaic modules. Of our total supply that year, the United States only manufactured 12 percent domestically. By the end of 2017, China is expected to have enough manufacturing capacity to produce 51 gigawatts of photovoltaics per year, an amount over twice as large as the global production of 24 gigawatts in 2010. So China will have the capacity to supply U.S. needs to help Mrs. Clinton achieve her goal. To be sure, there is nothing wrong with international trade, but let’s be clear that Clinton’s initiative is not going to give the United States a “leg up” on renewable energy; we will simply be providing more support for Chinese solar panel producers.

Clinton’s solar plan is a plan to import billions of dollars of solar panels, even though electricity demand is not growing to necessitate this kind of new electricity generating construction.

Hillary Clinton’s solar plan will cost more than $200 billion above and beyond current projections. But the true cost of the plan is much higher, especially when the costs of adding this much solar power is considered. Making matters even worse, electricity demand is not projected to grow enough that this new generating capacity would be needed, making Clinton’s plan even more wasteful.

[1] Make sure to scroll down for the solar capacity for “All Sectors.”

Global Fossil Fuel Consumption Subsidies Abound, But Not in the U.S.