The IEA expects generation from renewable energy to triple between 2008 and 2035, increasing from a 19 percent share in 2008 to 32 percent by 2035. The increase is mainly from wind and hydropower. Solar photovoltaic technology increases to a 2 percent share of global electricity generation by 2035. Biofuels in the transportation sector are expected to increase by more than a factor of 4, increasing their share of transportation fuels from 3 percent in 2008 to 8 percent in 2035.[iii]

Developments in producing natural gas have increased its availability, and due to its low operating costs and reduced carbon output compared to other fossil fuels, has made it a competitive fuel in the electric generating sector. Shale gas, in particular, is being produced in the United States and other countries using hydraulic fracturing and horizontal drilling technology, and new liquefied natural gas terminal capacity is sprouting up. These sources of natural gas will help to make it a competitive source of electricity in the next two and a half decades.

According to the IEA, 3.8-factor increase in government support is needed to increase renewables’ share from 19 to 32 percent in the generating sector worldwide by 2035. And, biofuels will require a 3.25-factor increase to grow their share of global transportation fuels from 3 percent to 8 percent by 2035.   Obviously then, due to the government support required over the next two and a half decades, renewable energy will still not be cost-competitive with traditional technologies by 2035. 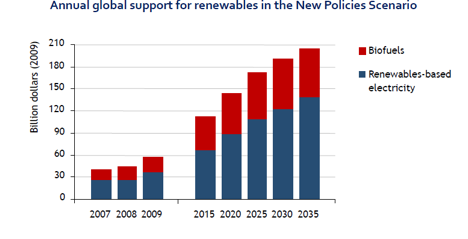 Corn is For Food, Not Fuel