Corn is in everything. It’s in your soda, syrup, shaving cream and licorice. You can find corn in batteries, ink and mayonnaise.  There are 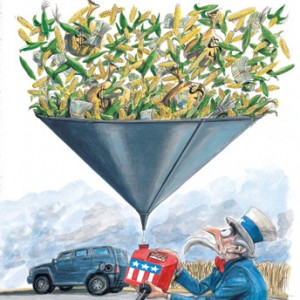 thousands of uses for corn, but the least efficient and most costly use is ethanol.

Ethanol is in the news because Congress is considering a $6 billion a year ethanol subsidy renewal that is designed to help offset production costs for refiners who blend gasoline with ethanol.

There are a number of problems with ethanol, but don’t take our word for it.

Forbes called extending the ethanol subsidy “…fiscally irresponsible.” On the other end of the business spectrum, Friends of the Earth explained that large scale argo-fuels are “ecologically unsustainable and inefficient.” Freedom Works summed up their stance on ethanol by saying it’s, “net loser for the economy, the environment, and for our energy security.” The World Wildlife Fund and the Sierra Club agree with Reason in that ethanol has done nothing to reduce green house gas emissions and has not weaned American’s off of imported oil. And the U.N.’s special rapporteur on the right to food, Jean Ziegler, called biofuels a “crime against humanity” because they use food for fuel instead of feeding the poor.

But the most telling insight into the ethanol subsidy debate came from Mr. Green himself, Al Gore.

In a candid moment, Al Gore told reporters that “ethanol” was a mistake and that he only favored ethanol because he represented farmers in Tennessee (this does not explain why Gore’s supported ethanol in An Inconvenient Truth after he left office) In the end, ethanol has come to represent Al Gore’s billion dollar mistake.

The Institute for Energy Research proudly stands with the Sierra Club, WWF and with Al Gore in saying: ethanol was a mistake and it’s time to end ethanol subsidies.