IER Testimony for the Kansas Senate Standing Committee on Utilities

WASHINGTON — The Institute for Energy Research submitted the following written testimony today to the Kansas Senate Standing Committee on Utilities:

Support for Renewable Portfolio Standards (RPSs), such as Kansas’s, are based in large measure on misperceptions. Common misperceptions regarding these mandates include:

None of these are true, but what is true is that RPSs raise the cost of electricity, and the states that have RPSs tend to have the most expensive electricity. More expensive electricity hurts people and businesses, and it hurts the long-run competitiveness of local and state economies because it drives energy-intensive industries out of the state. RPSs hurt consumers by shielding producers of renewable energy from market forces that drive reductions in cost and real increases in efficiency through technological progress.

Mandates on renewable energy are left over from the days when it was widely thought the U.S. was running out of energy and shifting to renewables was the only answer. Those days are over. The energy situation in the United States has changed since 2009 when the Kansas RPS was passed. For example, in 2009 natural gas prices had just seen large spikes, natural gas production was uncertain, and it appeared that the United States may have to import natural gas. But that is not at all what happened. In contrast, estimates of technically recoverable shale gas resources more than doubled from 2010 to 2011, largely due to better technology.[1]

In fact, the energy situation everywhere is changing. Today, we have critical insights into how renewable energy programs have fared in other places around the world. Renewables everywhere, despite receiving heavy subsidies and mandates, are not developing as quickly as their advocates hoped. In short, predictions about their growth have proven to be wrong, and the same is true for estimates touting the economic benefits of renewable mandates.

One argument people use to promote renewable electricity mandates is that mandates create “green” jobs. But trying to create jobs through renewable subsidies and mandates has proved to be a failure, and the “green jobs” philosophy has been refuted both in theory and in practice.

In Spain, for example, it is estimated that for every “green” job created, 2.2 jobs were lost in the rest of the economy.[2] Unemployment there is now over 25 percent, even though the government spent huge amounts of money on green energy. In Germany, subsidies in the solar industry reached as high as $240,000 per worker.[3] The situation in Denmark is similar. Danes have to pay the highest electricity prices in the European Union, and they pay subsidies of nearly $400 million a year to wind producers (in a country with less than 2 percent of the population of the United States).[4]  Throughout Europe, countries are backing away as fast as possible from subsidies and mandates because the high electricity prices are driving businesses to other countries and they can’t afford it.

While RPSs might “create” some identifiable jobs, they do not create jobs on net. The money to pay for the subsidies and mandates has to come from somewhere. In other words, if taxpayers had been able to spend or invest their money as they saw fit, instead of losing it to subsidies and higher electricity rates, the taxpayers would have spent the money and that spending would have created other jobs.

America has an abundance of energy

One of the most popular misconceptions about RPSs is that they are necessary because we are running out of energy resources and should therefore use more renewable resources. The reality is far different. The United States is not just energy rich, but according to the Congressional Research Service, the United States has the largest combined resources of natural gas, coal, and oil in the world.[5]

For electricity production, coal and natural gas are the most important resources, and the United States has a large amount of both. In fact, the United States has 486.1 billion short tons of coal in its Demonstrated Reserve Base.[6] The U.S. consumes 1 billion short tons of coal a year,[7] which means we have over 480 years of coal at our current rate of consumption. This actually may be an understatement of America’s coal resources because it does not include all of Alaska’s coal resources—some estimates are that Alaska has more coal than the entire lower 48 combined.[8]

The United States also has large amounts of natural gas. We have about 2.744 quadrillion cubic feet of technically recoverable natural gas.[9] The U.S. uses 25 trillion cubic feet a year, so we have enough natural gas for more than a century at the current rate of use, and if you find more in Kansas, that number will grow significantly.[10]

Wind and solar may not be the technologies of the future

One argument for renewable electricity mandates is that renewables are the future, so we should mandate their use and have the energy of the future right now. This argument presupposes that technologies like wind and solar are infant technologies and only need a leg up to be cost competitive. It also presumes that advocates of renewables can see decades into the future of the energy industry.

However, wind and solar are far older technologies than most people realize. In fact, people have used wind power to generate electricity for more than 125 years since a Scottish academic named James Blyth made a wind turbine.[11] Solar is also not an infant technology. The first solar cells were made in 1883 by American inventor Charles Fritts.[12] The first photovoltaic cells powerful enough to run everyday electrical equipment were created in 1954.[13]

For decades, the promoters of wind and solar have been claiming that wind and solar will soon be cost competitive—if only they receive some subsidies (or mandates…or both!) to help out. For example, in 1983, Booz, Allen & Hamilton conducted a study for the Solar Energy Industries Association, American Wind Energy Association, and Renewable Energy Institute. The report stated that “The private sector can be expected to develop improved solar and wind technologies which will begin to become competitive and self-supporting on a national level by the end of the decade [i.e. by 1990] if assisted by tax credits and augmented by federally sponsored R&D.”[14] In 1986, Amory Lovins of the Rocky Mountain Institute lamented the untimely scale-back of tax breaks for renewable energy, since the competitive viability of wind and solar technologies was “one to three years away.”[15]

Despite years of subsidies for wind, solar, and other renewables, these technologies are still not competitive with coal, natural gas, and other affordable, reliable sources of electricity generation. Further, direct comparison between dispatchable, reliable sources of energy like natural gas, nuclear, and coal and non-dispatchable sources like wind and solar are an apples to oranges comparison because dispatchable power is so much more valuable in keeping the lights on. Also, if these renewables were truly cost-competitive and provided the same value as conventional resources, there would be no need for RPSs or subsidies like the wind Production Tax Credit (PTC).

Given the very poor record of analysts and renewables advocates in estimating if or when renewables will make economic sense, it is a risky proposition to mandate them in the future energy mix. As we have seen with the boom in production of shale gas, the energy future is nearly impossible to predict, and better technologies are hard to recognize before they have proven themselves in the market. The reality is that we do not know what the future will bring for electricity generation, and we should not presume to know what will be cost-competitive in the future. Instead of assuming it will be wind and solar, these technologies should prove themselves in the market. We will only know if renewables are cost-competitive by seeing if they can thrive without mandates and subsidies.

EIA estimates these data for 2018, the most recent year that technologies can be compared due to the lead time for construction. The least expensive form of new electricity generation is expected to be natural gas, followed by wind.[16] Solar is more than three times more expensive in EIA’s calculation than natural gas.

It appears that wind is, therefore, pretty inexpensive. The problem with this assumption is that it does not consider the requirements of the electrical grid. Wind, according to EIA, might be inexpensive, but it is only available when the wind is actually blowing. As we know, the wind does not blow all the time (and for that matter, the sun does not always shine).

The American Tradition Institute recently produced a study that added the hidden costs of wind, which included the cost of fossil fuel power as back-up when the wind is dormant, the additional cost of transmission that frequently occurs with wind installations due to the inaccessibility of the best wind resources, the cost of wind’s favorable tax benefits in “accelerated depreciation,” and a shorter estimated life of a wind turbine of 20 years to the per-kilowatt-hour cost of generating electricity from wind power that includes capital costs and operating costs, as determined by EIA and the Department of Energy. They found the cost of wind power to be 15.1 cents per kilowatt hour if natural gas is used to back-up the wind energy or 19.2 cents per kilowatt hour if coal is used as the back-up fuel.[17] These costs are 1.5 to 2 times the 9.6 cents per kilowatt hour estimate the EIA is using for generating electricity from wind in its models.[18] 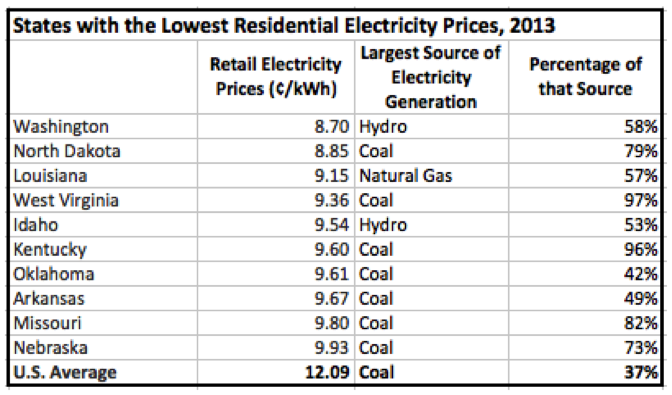 The takeaway from this chart is that according to EIA, although natural gas might be the least expensive source of electricity generation if you are building new plants, where coal plants are already built and where hydroelectric dams exist, coal and hydroelectric power are the cheapest. That also means that if older plants of any kind are being replaced, the cost of electricity from new plants will likely be more expensive. The following graph illustrates the incredibly low cost of installed coal capacity.[20] 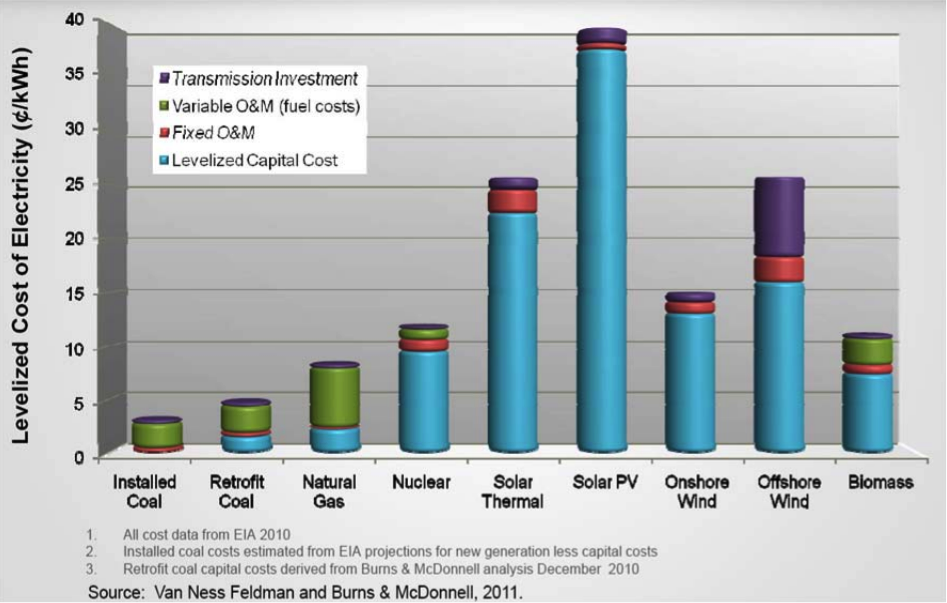 America is very rich in coal. However, one reason some support RPSs is because they are concerned about air pollution from coal. But there is good news—our air quality is improving and new coal plants are cleaner than ever before.

Today’s coal-fired power plants produce more power, with less emission of pollutants, than ever before. The reason is because of pollution control technologies such as flue gas desulfurization, selective catalytic reducers, fabric filters, and dry sorbent injection, all of which have greatly reduced coal plant emissions. [25]

These advances in technology have enabled large improvements in air quality. Since 1970, the total emissions of the six criteria pollutants have declined by 72 percent, even though energy consumption has increased by 47 percent, vehicle miles traveled have increased by 165 percent, and the economy has grown by 219 percent.[26] (The “criteria pollutants” are carbon monoxide, lead, sulfur dioxide, nitrogen oxides, ground-level ozone, and particulate matter.) The following chart from EPA shows the increase in economic measures compared to the decrease in pollution emissions.[27] 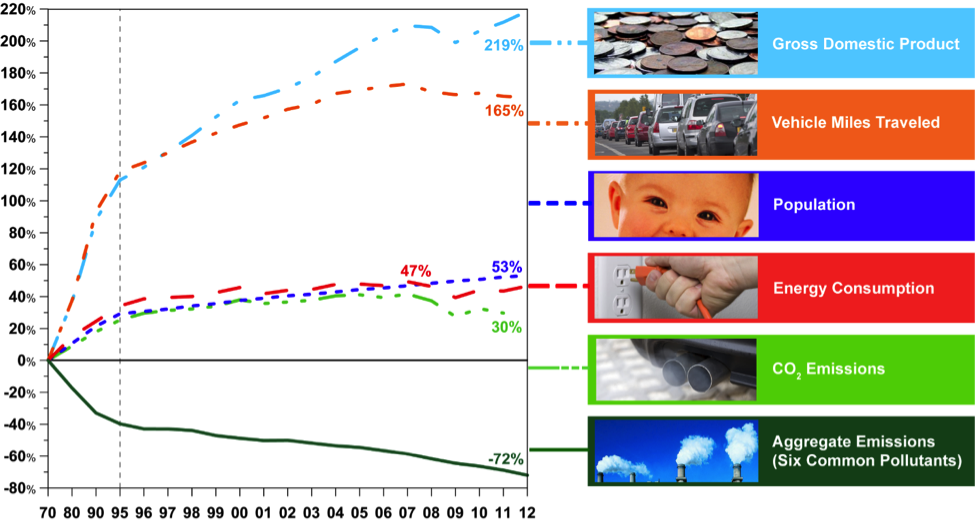 As technology continues to advance, pollution from coal-fired power plants and other sources will continue to improve and air quality will improve as well.

Much of the support for renewable portfolio standards is based on misperceptions about America’s energy resources and the nature of electricity generation. America is an energy rich country—we are rich in natural gas, coal, and even nuclear resources. We have enough natural gas to last for a century at our current rate of use and hundreds of years of coal. Some have raised concerns about air quality, but history shows that even as we have used more energy, our air quality has improved.

Mandating renewable production is mandating the use of inefficient, unreliable sources of electricity generation. This increases electricity rates and it increases taxes to pay for subsidies such as the production tax credit.

of Gas Resources in the Marcellus Shale, Appalachian Basin, Aug. 23, 2011,

[12] Department of Energy, The History of Solar, http://www1.eere.energy.gov/solar/pdfs/solar_timeline.pdf.

[17] George Taylor & Thomas Tanton, The Hidden Costs of Wind Electricity Why the full cost of wind generation is unlikely to match the cost of natural gas, coal or nuclear generation, http://www.atinstitute.org/wp-content/uploads/2012/12/Hidden-Cost.pdf.