Radical environmentalists have mixed emotions this time of the year. They want to celebrate Christmas like everyone else, but they can’t get over the fact that the holidays accompany the most conspicuous season of energy consumption in the U.S.  With billions of stringed light bulbs on buildings and trees across the nation, the illumined beauty of Christmas must surely vex those who despise an electrified America.  And as for chopping down all those Christmas trees, one wonders where the Sierra Club and the Occupy protesters are?  Why aren’t they staging their protests at Christmas tree farms, Home Depot, and every little farmer’s market across the country?

While the rest of the country is enjoying a warm hearth and cold eggnog around festooned and lighted evergreens, energy doomsayers like Paul Ehrlich rail against “garish commercial displays.”  Other anti-energy extremists have the good sense not to attack Christmas so blatantly, yet their silence on the “excesses” of holiday lighting is a glaring exception to their goal of saving the world by eliminating discretionary energy usage.

One wonders why anti-energy activists who are willing forgive holiday energy guzzling don’t similarly excuse indoor heating and cooling, one-switch centralized lighting and instant-on appliances that “leak” electricity, not to mention SUVs?  The energy Grinches, however, seem willing to keep quiet about our Clark Griswold-esque holiday decorating – energy usage that is purely celebratory – while they excoriate essential energy usage like warming a home or lighting an office.

Of course, there’s no reason to worry about depleting our energy resources or harming our environment because of holiday lighting – or any other way that Americans now use electricity at work and home.

Human ingenuity continues to unlock mineral plenty despite the heavy hand of government in the United States and in neighboring countries. As documented in a recent report by the Institute for Energy Research:

Record energy consumption has been accompanied by improving air quality. The U.S. Environmental Protection Agency (EPA) reported that emissions of air pollutants in urban America have declined 71 percent since 1970. 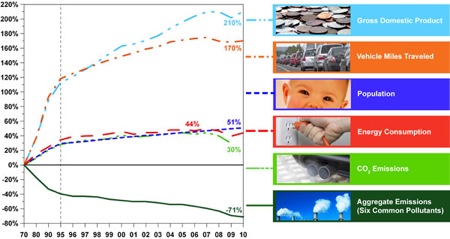 According to the U.S. Energy Information Administration (EIA), this fall in criteria pollutants was accomplished while fossil energy usage increased by 40 percent.

Further air emission reductions are expected, but it will not be efficiently accomplished by forcing higher prices or inconvenience levied on consumers. It will be accomplished with market incentives, technological improvement, and regulation based on sound science, not exaggeration and alarmism.

Energy Use and Societal Progress

The wealth created from affordable, plentiful energy–the dense energy of oil, gas, and coal–provides the primary means for societies to improve the environment. In the final analysis, wealth is environmental health, which explains why increasing energy usage and environmental improvement have gone hand in hand in the Western world.

There is much to be thankful for this holiday season with our energy economy. But thoughts about the less fortunate should be with us too. An estimated 1.4 billion people do not have electricity for lighting, heating, cooling, cooking, or water purification. For the energy-poor, there could be no greater holiday gift than affordable electricity itself.

Energy brings good things to life—no, make that wonderful things—comfort, convenience, cheer, and it even empowers celebrations. May one and all in good conscience enliven this holiday season with lights and wreaths and trees aplenty. With conventional energy technologies rapidly improving, Americans can look forward to even more energetic celebrations and shared goodwill in the holidays ahead.

Death and Toxins: How Krugman Botched His Mercury Commentary