Levelized costs are a convenient way to compare the costs of various forms of future electrical generation. Similar to a mortgage payment, levelized costs represent the present value of the total cost of building and operating a generating plant over its financial life, converted to equal annual payments. These data are most useful in comparing technologies that can produce electricity at any time of the day or night and can supply that power continuously, like coal-fired, natural gas combined cycle, and nuclear power plants. Levelized costs are less useful for comparing intermittent forms of electrical generation such as wind and solar, overstating their value compared to more reliable sources of generation.

Intermittent technologies, like wind and solar, can only generate electricity when their resources are available, i.e. when the wind blows or the sun shines. While such technologies do supply electricity, they do not supply capacity because they cannot be relied upon to provide power when it is demanded. In fact, they need to be backed-up by technologies that can provide power upon demand.

Technologies that provide capacity when demanded are essential to the electric grid because electricity cannot be stored practically at the volume that is transmitted over the national grid. Electric demand must be balanced by supply when the demand occurs to maintain reliability of the grid.

What levelized cost comparisons do not include is the difference in the market value of the electricity supplied that can and does vary widely over the course of a typical year. The difference between high and low wholesale market prices, including capacity payments for technologies that can supply power during peak periods, can be as large as a factor of 4.[i]

While electric demand levels and their associated prices are extremely high for only a relatively small number of hours each year, technologies such as wind and solar that may not be able to supply power during those times are clearly at an economic disadvantage as they should be. Wind power, for example, generates electricity mostly at night because the winds are the greatest at that time.  However, consumer demand is greatest during the day when most people are working or at home using electricity. [For an example, see the chart below from the Bonneville Power Administration.] While solar power produces electricity during the day when demand is at its highest, solar like wind, is an intermittent technology because it cannot produce power when its resource, the sun, is not shining. Thus, it cannot be used to provide capacity value. 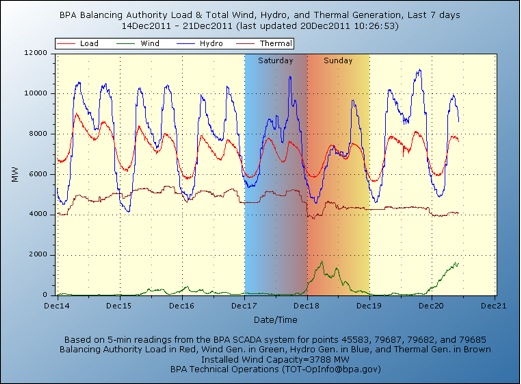 If renewable energy technologies were economic, they would not need subsidies and mandates. The federal government provides subsidies that consist of tax credits on the amount of production the renewable technology generates, tax credits on the renewable investment, or investment rebates. Various states also have incentives and/or mandates for renewable power. For example, twenty-nine states have renewable portfolio mandates requiring a specified amount of their state’s electricity to be generated from qualifying renewable energy technologies. Since there is no free lunch, these subsidies and incentives cost either the American consumer or the American taxpayer more than generating electricity from traditional technologies.

While many system operators have been forced to draw upon fossil fuel back-up units when power is most needed because wind was not available, BPA has had to deal with too much wind power conflicting with its hydroelectric generation of renewable electricity. To balance supply and demand, BPA displaced nearly 100,000 megawatt hours of wind energy between May 18 and July 10 of this year (over 5 percent of the amount produced by wind power connected to its grid) in favor of hydroelectric power in order to protect the salmon in the Columbia River.  While BPA could have reduced the power output of its hydroelectric dams by routing excess water through a spillway, it chose not to because BPA believed it would have violated the Clean Water Act and the Endangered Species Act. Water passing over a spillway picks up nitrogen gas, which is harmful to salmon.

This is a perfect example of the problems faced by a system operator when its power sources cannot be scheduled. Since electricity production and consumption must be balanced at all times, the BPA system operator had to make a decision regarding which source of power to use during surplus times and chose hydroelectric power and compliance with federal environmental laws.

The wind producers in the BPA system took the issue to the Federal Energy Regulatory Commission (FERC) for a ruling because they lost both the revenue from the wind power they produced and the production tax credit from the federal government. FERC ruled that BPA had to change its rules in favor of wind, and to the detriment of the salmon, because BPA’s policy “significantly diminishes open access to transmission” and imposed conditions on the wind operators “that are not comparable to those it provides itself.”[ii]

Unfortunately, these issues are bound to get worse as more intermittent renewable power is put onto our transmission system.

In this example, the levelized costs of offshore and onshore wind are compared to illustrate how these costs can be used to point out how electricity prices are affected by decisions of state and federal governments. The Energy Information Administration (EIA) estimates the levelized cost of onshore wind to be 9.7 cents per kilowatt hour and offshore wind to be 24.32 cents per kilowatt hour.[iii] Two key offshore wind projects have been approved by the Department of Interior and the respective state governments despite their much higher cost than onshore wind projects.  The first is Cape Wind off the coast of Cape Cod, Massachusetts that is searching for a buyer for half of its planned electric output. The second project, off the coast of Delaware, has just been declared dead by its sponsor, who cited the inability to obtain an investment partner, lack of federal loan guarantees, and the year-end expiration of tax credits as the major reasons for dropping the project.[iv]

It is no wonder that these projects are having difficulty when EIA estimates the levelized cost of offshore wind to be 2.5 times that of onshore wind. The Cape Wind project was supposed to start at 18.7 cents per kilowatt hour, and to escalate at 3.5 percent per year for a 15-year contract. That means that eventually the cost of the Cape Wind offshore wind project would exceed 31 cents per kilowatt hour. The starting price alone is about twice what the utility pays for power from conventional sources, and almost twice the average U.S. cost of electricity—9.9 cents per kilowatt in 2010. Paul Joskow calculated that the implied price of the Cape Wind project’s displacement of carbon dioxide (CO2) is $300 per ton or more than 20 times the price of CO2 on European markets.

Analysis of levelized costs of electricity should more accurately evaluate technologies and costs by considering the following factors:

As intermittent technologies become more numerous, they will affect our transmission system in ways that will provide additional challenges. We have started to see some of these effects in BPA’s dilemma of ensuring that lights do not go out and that salmon survive according to federal law. In BPA’s case, they have an electricity surplus, but according to engineers, this surplus can cause blackouts just as easily as a lack of sufficient power if not handled properly.  The conflicting laws, regulations and goals of federal and state renewable energy policies are beginning to threaten the viability of the electrical system while also causing problems of legal compliance with other laws.