Julian Morris has produced a detailed study for Reason that explores the costs and benefits of carbon dioxide emissions. Morris concludes with the provocative claim that the weight of evidence suggests federal agencies should ignore carbon dioxide emissions when evaluating regulations, because on balance the “positive externalities” from enhanced agricultural output, reduced deaths from cold, and so forth balance out the “negative externalities” from climate change. In this post, I’ll explain some of the study’s key points.

Morris’ study covers much of the same ground that we at IER have detailed, in our critique of the “social cost of carbon” (SCC), the Integrated Assessment Models (IAMs) used to calculate it, and the way the Administration’s Working Group ignored clear OMB guidelines such as the use of a 7 percent discount rate and consideration of only domestic benefits.

Yet Morris’ study provides a much richer history and explanation of the computer simulations used to calculate the so-called social cost of carbon, as well as the history of federal regulatory analysis and the establishment of the Administration’s Working Group. True policy wonks will benefit from Morris’ study because of these details alone.

Morris discusses several strands in the recent scholarly literature that suggest the “official” estimates of the harm of carbon dioxide are much too high. For example, a 2014 paper using the FUND model derives a relatively low estimate of the social cost of carbon, in part because it incorporates the benefits of CO2 fertilization. In other words, the higher the atmospheric concentration of CO2, the greater agricultural yields will be (other things equal).

Morris also discusses the developments in the physical science literature that suggest that the current “official” estimates overstate how much the earth will warm in response to a given increase in CO2 concentrations. Morris describes one paper in this way:

In a paper published in Nature Climate Change in September 2013, John Fyfe, Nathan Gillett and Francis Zwiers compared global mean temperature data (from the Hadley dataset) for the 20-year period 1993-2012 with 117 simulations produced by a group of 37 models that form the basis of the IPCC [Intergovernmental Panel on Climate Change] assessments…Fyfe et al. found that whereas the global mean temperature had risen by 0.14±0.06°C, the models forecast an increase of 0.30±.02°C (in each case the upper and lower bounds give 95% confidence limits). In other words, from 1993 to 2012 the world warmed at about half the rate the models forecast. [Morris p. 29]

Because of findings such as these, Morris argues that the calibration of the computer models used to estimate the social cost of carbon is far too pessimistic. If more accurate numbers were plugged into the computer simulations, then there would be less projected global warming (for an assumed emission scenario) and thus lower damages.

Another interesting aspect of Morris’ study is his documentation of improving trends in various categories of human well-being with the growth of Western economies. For example, the rate of typhoid fever in the United States dropped by some 98 percent from 1920 through 1960. Malaria deaths per one million in the U.S. dropped from about 58 in 1920 to 2 in 1946.

But for our purposes the most relevant chart is from page 36, showing the relationship between economic growth and deaths from extreme weather events: 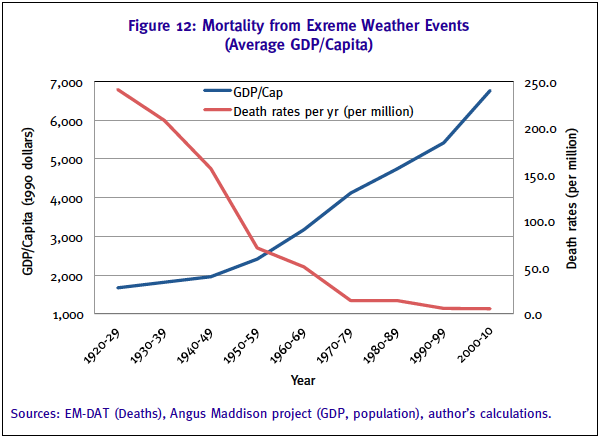 As Morris’ Figure 12 indicates, rising GDP per capita went hand in hand with a plummeting death rate from extreme weather events. To the extent that affordable, reliable electricity and motor transportation were crucial in the above economic development, we see that the U.S.’s carbon emissions during the 20th century did much to defend against weather-related harms, regardless of how much they were influenced by human activities.

Julian Morris’ new study on the social benefits and costs of carbon dioxide emissions is an excellent reference on the subject, providing citations to many strands in the literature. Morris provides compelling evidence that the official estimates greatly overstate the harms of carbon dioxide emissions. Morris goes so far as to conclude that the U.S. government should ignore CO2 altogether when evaluating federal regulations.

The Fed and Oil Prices