Access to affordable, reliable electricity is crucial to modern life. Electricity prices are a big deal for American families and businesses because higher energy prices can lead to severely negative economic consequences. A recent study commissioned by the National Rural Electric Cooperative Association (NRECA) assesses the impact of higher electricity rates on economic growth and employment by simulating a 10 percent and 25 percent increase in electricity prices.

The economic forecasting and analysis firm Regional Economic Models, Inc. (REMI) produced the study, which incorporates a two-region REMI-PI+ computerized model to evaluate the rise in prices. The study illustrates the resulting impact on gross domestic product (GDP), jobs, and disposable personal income. In order to emphasize the impact that price increases have on rural America, the study compares the results for areas served by not-for–profit rural electric cooperatives (and their vicinity) alongside the results for the rest of the U.S.

The study reveals that higher electricity prices have a negative impact on jobs and economic growth: from 2020 to 2040, cumulative job losses in the U.S. range from 18.5 million to 31.3 million and national GDP cumulatively declines by $2.8 trillion to $5.4 trillion.

Overall, the regions hit the hardest by high electricity prices are areas served by rural electric cooperatives, which prominently feature crucial industries like agriculture and manufacturing. Ensuring that American families and businesses have affordable and plentiful electricity is an essential priority of energy policy. Unfortunately, Environmental Protection Agency (EPA) policies, especially the so-called “Clean Power Plan” or carbon rule, will make it harder for Americans to access affordable energy. EPA’s recently finalized mandate to reduce carbon dioxide emissions from existing power plants will increase electricity prices for Americans and have no tangible impact on climate change. According to one estimate of the proposed rule, residents of 43 states could see double-digit percentage increases in their electricity bills under EPA’s rule.

Now that the regulation is finalized, states are faced with a choice: submit plans to EPA or reject the rule. Given the huge costs and minimal benefits, states should reject EPA’s pleas for state implementation plans and wait until the rule’s legal issues are resolved in the courts.

Electricity is an ubiquitous part of modern life. Higher electricity prices not only require families to dedicate more resources to electric bills, but also harm employment and inhibit growth.[1] Based on NRECA’s results, these negative effects would be primarily concentrated in areas that are served by rural electric co-ops and their surrounding vicinity.

Regions served by rural co-ops are especially sensitive to energy price hikes because they tend to feature more energy-intensive businesses and have more households that spend a larger proportion of their income on energy. Critical industries like manufacturing (32 percent of the industry’s employment) and agriculture (64 percent) are disproportionately located in areas served by rural co-ops.[2]

Residential households in this area also spend more on electricity as a percentage of their total expenditures, devoting 1.72 percent of consumer spending on electricity compared to 1.45 percent of spending from the rest of Americans.[3] Since families living in regions supplied by co-ops have, on average, a lower real income per capita than those living in the remainder of the U.S. ($39,000 per year to $48,000 per year, respectively),[4] they have less income in the first place to devote to electricity, making the impact of rising prices more significant.

In its study, NRECA estimated the effects of a 10 percent and 25 percent increase in electricity prices over the 2016–2040 period, applied linearly.[5] The results were measured against the baseline, which was a business-as-usual forecast where prices do not change.[6] The study quantifies these results in the context of employment, GDP, and real disposable personal income (RDPI).

Under the 10 percent scenario:

Under the 25 percent scenario: 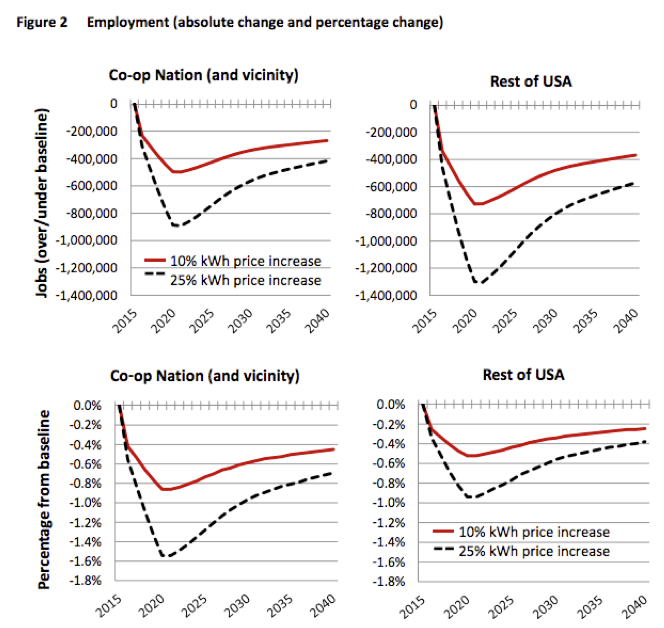 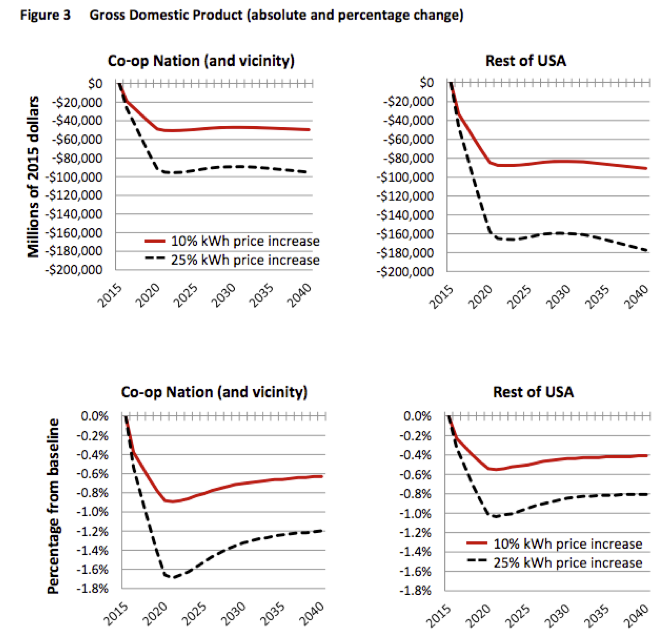 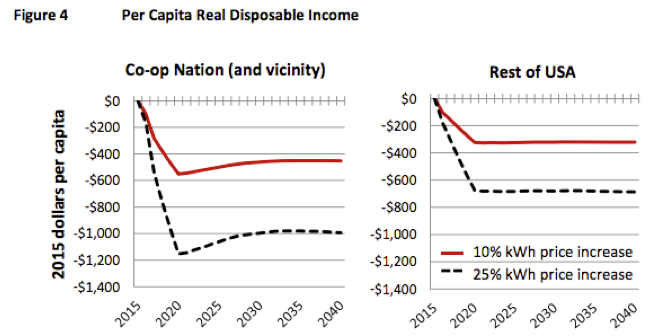 NRECA’s results make intuitive and economic sense. When businesses pay more for their inputs, they have less capital to devote to paying and retaining employees. For energy prices, this is compounded by the fact that some companies purchase inputs from other businesses also affected by price increases. In rural areas, the “relatively small populations and electricity-intensive industry mixture” cause a greater proportional loss of jobs compared to the rest of the country.[8]

Due to the electricity-intensive industry mixture in rural America, higher electricity prices have a greater relative impact on GDP in rural areas compared to the rest of the U.S.[9] The national impact would also be severe. Overall, the U.S would experience either a $2.8 trillion or $5.4 trillion cumulative loss in GDP from 2020–2040, depending on the scenario. This decline in GDP would permanently harm national economic output.[10] The end result would be a less competitive economy and a population more sensitive to economic recessions.

While measurements of employment and GDP losses show the macroeconomic effects of higher electricity prices, they don’t speak specifically to the impact on households and families. To address this, the study evaluates the consequences for real disposable personal income (RDPI), which “is the net of labor and capital income, minus taxes, and adjusted for a price index (including housing prices and electricity prices) to make real income.”[11] Essentially, RDPI provides a good indication of the overall state of the economy and future prospects for growth as well as a measure of the prosperity of households. In particular, a higher price index and higher production costs for businesses correspondingly increase prices for consumers and decrease RDPI.[12] When electricity prices increase, Americans must pay more to meet their electricity needs, leaving households with fewer resources to devote to other areas and priorities. Since average incomes are lower in rural areas than in other parts of the U.S., the impact on rural America would be substantial.

A number of different analyses expect EPA’s carbon rule to increase electricity prices. An assessment by NERA Economic Consulting determined that electricity prices would increase by double-digit percentages in 43 states from 2017 to 2031.[13] A separate study by Energy Ventures Analysis found that EPA’s rule would increase electricity and natural gas costs by 37 percent between 2012 and 2020. As shown by NRECA’s study, raising electricity costs, as expected under EPA’s carbon rule, will inflict severe economic burdens on all Americans, especially rural families who already spend more on energy and have lower disposable incomes.

The impact of higher electricity prices—anticipated under EPA’s new carbon regulation—will be detrimental to the U.S. as a whole and particularly severe in areas where power is primarily supplied by rural electric co-ops. The loss of jobs (especially in key industries like manufacturing and agriculture) would be substantial and the decline in GDP would be damaging. Furthermore, families would see a sharp drop in disposable income, a fact that is compounded by the already lower incomes of households served by rural co-ops. Ultimately, American families would be left with fewer resources to save or spend on basic necessities like food, housing, and healthcare.

[6] See NRECA, pp. 6, 7, and 11 for discussions and references to the business-as-usual baseline projection.

U.S. Climate Deal with China Is No Deal At All