The most galling thing about these new regulations is that they are based on the assumption that 1.) the operators and manufacturers of heavy trucks and buses are making poor choices, and 2.) the bureaucrats’ decisions will result in superior outcomes. 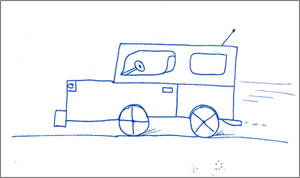 Pictured: Blueprints for the 60 mpg automobile

In other words, the bureaucrats are arguing that the operators and manufactures of heavy trucks and buses do not care enough about fuel economy and are going to mandate great fuel economy.

Never mind that the operators have to put fuel in their trucks and buses and are therefore very cognizant of the benefits of fuel economy.

Never mind that manufacturers compete to provide trucks and buses that people voluntarily purchase and they know that fuel economy is an important selling point.

The darndest thing about fuel economy standards is that they lead to unintended consequences. For example, did you ever wonder what happened to the station wagon? In the 70’s, the National Highway Traffic Safety Administration and the Environmental Protection Agency teamed up to produce Corporate Average Fuel Economy (CAFE) regulation that mandated miles per gallon standards.  The intended consequence of this new regulation was to shift consumer tastes away from inefficient station wagons and towards more fuel-efficient vehicles.

Well, the station wagon died, but it gave birth to the mini van and sport utility vehicle. This was possible because the station wagon was classified as a car, but vans and SUV’s are classified as light trucks, which have more lenient standards.  As a result of CAFE, car manufactures had a new opportunity to market bigger “cars” to consumers as a result of government intervention.

The take away from this case study is the simple fact that government mandates cannot outpace technology. The hopes and dreams of government bureaucrats need to be tempered with reality when regulating fuel standards on trucks and buses, but also with cars. Ed Tonkin, the chairman of the National Automobile Dealers Association, summed up this point nicely talking about a possible 60! MPG mandate for cars:

“Sixty miles per gallon has a nice ring to it — it’s the kind of number you can get your arms around…But reasonable people agree it’s a stretch, and it will be costly. And no one knows whether it’s even doable.”

The Nobel economist F. A. Hayek once said that the “curious task of economics is to demonstrate to men how little they really know about what they imagine they can design” and new fuel economy mandates will once again demonstrate a failed design of inside-the-beltway imagination.