The California motto is “eureka,” which means, “I have found it.” The ‘it’ refers to gold and conjures images of the great gold rush of 1849.  Today, the ‘it’ refers to the rush to grab solar energy subsides and tax credits.

The Wall Street Journal reports that Sec. Salazar has approved the construction of the largest solar plant in California. In order to break ground, Solar Trust of America will receive a “$900 million cash grant for the first two units” of the plant and benefit from a U.S. Treasury tax credit. 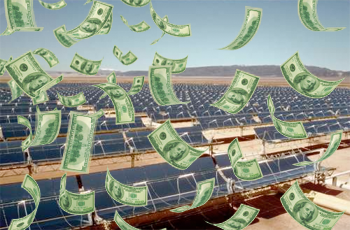 How we fund the project. Don’t ask questions.

The Obama Administration is praising the project because the upshot will be around a 1,000 jobs at the “peak of construction” and almost “300 permanent jobs to operate the facility.”

But no one is talking about the looming downside of the project.  As we saw in Spain, government investment in green technology and green jobs crowd out real investment and real jobs.

Readers familiar with Bastiat will recall his “Broken Window Fallacy,” in which a punk kid is praised as a job creator after destroying a butcher’s windowpane. Although the glazer gets paid to repair the window, what is not seen is the new pair of slacks the butcher would have bought from the tailor.   Instead of having a new window and slacks, the butcher now only has the window.

California created a broken window fallacy of investment by focusing on what is seen and failing to consider what could have been.

What is even more shocking about this project is that “state and federal regulators pledged…to work together to fast-track approval” while shallow and deep-water oil rig operators in the Gulf wait for permits.

Be careful Californians, the rush of green energy prospectors to your state could mean you end up with fool’s gold.

Put That in Your Engine and Gun it