Since 2009, the Obama Administration has been using the “social cost of carbon” (SCC) in cost-benefit analyses to justify regulations that reduce the use of energy from oil, coal, and natural gas. For the most part, this calculation has flown under the radar, but that changed in June when the Obama administration dramatically increased their estimate of the SCC.

The Obama Administration’s increase of the social cost of carbon, without public comment or scrutiny, has prompted many to look at how the Administration has used the SCC in the past. As we explain here, so far the SCC has been used in nearly 30 rules and can account for over 20 percent of the alleged benefits from some regulations.

What is “Social Cost of Carbon”

The social cost of carbon is the present-value of projected future net damages from emitting an additional unit (a ton, say) of carbon into the atmosphere. When the federal government started using the social cost of carbon, the amount varied greatly from $0 a ton to $68 a ton.[1] The reason the number varied so greatly is because the calculation requires a large number of assumptions, including the determination of the proper discount rate.

The Use of the Social Cost of Carbon So Far 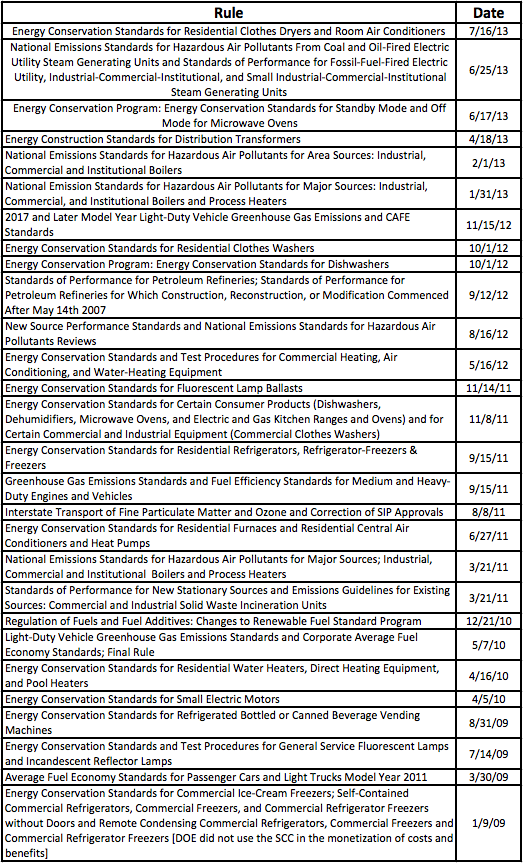 Bob Murphy of IER highlighted the potential impact of the social cost of carbon changes and its de facto role as a carbon tax:

“Government agencies will have the ability to use existing regulations in order to effectively tighten the screws on carbon-emitting activities, by claiming that the new measures pass a cost/benefit test. Even if the public will never support an explicit carbon tax, the machinery is being constructed to achieve the same de facto result—except with greater economic inefficiency—without the need for pesky tax bills.  And, it is being done largely in backrooms by the political class or their designees, outside of the view of the public, an increasingly worrisome trend in a system designed to protect liberties through open government with checks and balances.”

As President Obama made clear in his speech on climate change, he has no problem furthering his agenda by executive fiat. This increase in the social cost of carbon, without public input or involvement is just another example of the undemocratic nature of the Obama administration’s regulatory agenda.

The Truth Behind “Affordable” Energy in California