An August 20th blog post by Peter Miller of the Natural Resources Defense Council (NRDC) attempted to discredit California Assembly Bill 32 (AB32) opponents, but instead succeeded in displaying its disregard for facts and the reality of the electricity market in the state.

First, Miller tries to convince readers that California energy prices are “low” because residential electric bill totals fall below the national average and those of their neighbors, completely overlooking the price per kwh.  That is like telling a driver who averages 10 miles of driving per month in Hawaii their gas prices are actually lower than a driver in South Carolina who drives 100 miles monthly because, even though a gallon of gas costs $4.31 in Hawaii and $3.28 in South Carolina, less money is coming out of your pocket each month.

It is true that California residents do have the 7th lowest average monthly electric bills in the U.S. at $83.70. The low price, however, results from less usage by households and not from more affordable rates. California residential electricity prices are actually 9th highest in the nation at 14.78 cents per kilowatt hour. Consumers would always like to pay less on their monthly bills, so claiming that price per kilowatt hour doesn’t matter to them, as the NRDC does, is ridiculous. 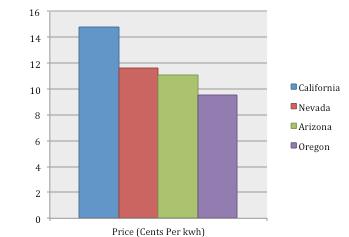 While these figures for energy rates are bad enough at the residential level, it gets even worse when you look at the commercial and industrial markets.  Again, comparing rates to California’s neighbors, as Miller chooses to do, the state has rates well above its counterparts. Commercially, California’s rates are 37-60 percent higher. Industrially, it’s even worse for the Golden State as rates are 52-85 percent higher than its neighbors.[1] 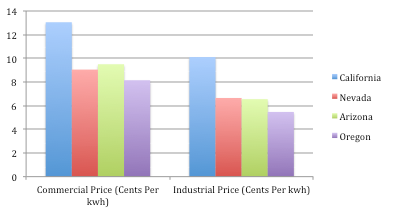 The Myth of California Efficiency

Clearly, lower monthly bills in California are due to less consumption, not especially affordable rates. In the NRDC post, the author cites California’s history in pioneering energy efficiency as the cause for low energy consumption, implying that this model can be successful elsewhere.

Former Policy Advisor of the California Energy Commission, Thomas Tanton, addressed this flawed argument in a 2008 study. He found that many unrelated conditions unique to California provide for favorable usage conditions, but may not be replicable in other locations.

For one, California’s climate is unlike any other in the U.S.  Being so mild, it limits the need for excessive cooling and heating, resulting in major consumption reductions.

Next, California’s economy has moved away manufacturing to less energy-intensive service based industries. This too has led to an overall reduction in statewide electric consumption.

Finally, the relatively high residential property prices in the state have had the effect of lowering the size of residences available to consumers at each price point.  The high prices also encourage more individuals to live in a single household, resulting in less electricity usage.[2]

Other studies have reached similar conclusions on California’s lower energy consumption. For instance, a study completed in 2008 by Stanford University, found that only 23 percent of California’s energy savings since the 1970’s have come from  its energy conservation measures.[3] A second study, by Arik Levinson at Georgerown University, found that trends unrelated to energy efficiency accounted for around 90 percent of residential electricity savings since the 1970’s. Levinson says that California “provides no lessons for other states or countries considering adopting or tightening their energy efficiency standards.”[4]

One problem with efficiency increasing mandates is assuming they will produce the full measure of projected benefits with no associated side-effects. The major reactive phenomenon associated with energy efficiency mandates is called the rebound effect.

When efficiency mandates are introduced, the public tends to respond to the lower costs of utilizing energy with an increase in energy intensive activities. Because of this, promised savings associated with greater efficiency programs can fail to materialize at the rate initially presented.

After evaluating studies on the rebound effect, Cal State Fullerton economist Robert J. Michaels found that over 50 percent of studies show rebounds that approach or exceed 100 percent of gained efficiency.[5] Even environmental groups, such as the Breakthrough Institute, have raised concerns with the lack of attention given to the rebound effect.[6] This issue must be considered when promoting California’s increased efficiency programs.

Subsidies Do Not Equal Lower Bills

Next, the NRDC claims that government subsidies and utility incentives are somehow the driver of lower utility rates for customers.  Basic economic theory tells us this is not true. A subsidy of any kind is just “robbing Peter to pay for Paul.”  While some consumers may see their monthly bills cut, tax hikes and fees levied on the rest of the population pay for such programs and are felt in other areas of the economy.

The post claims that for every dollar spent in programs to increase efficiency, customers will see two dollars in benefits. As we have already shown, much of these benefits can be negated by the rebound effect alone.  On top of that, if a natural economic benefit is there for customers, why do we need subsidies and government mandates to prompt action in the first place?  Indeed many of those who choose to participate in efficiency programs and claim subsidies, are those who would participate in the desired action voluntarily, without outside incentives. Virginia Kreitler of the Synegetic Resources Company conducted a survey on residential appliance replacement programs aimed at increasing energy efficiency. What she found was that 63.3 percent of those who participated would’ve done so of their own choice, without an incentive in place.[7]

The NRDC blog uses misleading comparisons and little economic justification for its claims that California’s energy policy has left its residents better off. In fact, residents and businesses alike would see huge cuts to their power bills if California’s rates were brought in line with their neighbors.

The fact that California’s energy is in any way affordable, is due to coincidental environmental and unrelated economic conditions that have allowed for low levels of energy consumption to counteract the high per kwh rates.

By acknowledging the flaws and ineffectiveness of efficiency mandates and eliminating costly government subsidies, Californians will enjoy economic savings across the board.

[4] Levinson, Arik, California Energy Efficiency: Lessons for the Rest of the World, or Not? Georgetown Economics Department and NBER. July 29, 2013, http://www9.georgetown.edu/faculty/aml6/pdfs&zips/CaliforniaEnergy.pdf

The Use of the Social Cost of Carbon, So Far