Further, Massachusetts is part of the Eastern Interconnection electricity grid and receives power from sources that contribute to that grid, including coal, natural gas, nuclear power, hydroelectric and other renewable energy. Thus, the state is not in sole control of which generation sources provide its electricity. Also, non-hydroelectric renewable energy—particularly solar and wind generation—are intermittent energy sources, producing power only when the wind blows and the sun shines so they cannot supply power 24/7 as customers require. Customers expect their electricity to be available when they need it (e.g. lights should come on when they flip the switch, not just when the wind blows or the sun shines).

The bill,[i] if passed and signed by the governor, will require the state Department of Energy Resources to set binding targets for renewable energy growth in all major sectors of the economy, and issue regulations to ensure that Massachusetts stays on track in obtaining 100 percent renewable energy by 2050. The bill is designed to complement the Massachusetts Global Warming Solutions Act of 2008, which requires the state to reduce its carbon dioxide emissions by at least 80 percent below 1990 levels by 2050. The bill would essentially increase Massachusetts’ renewable portfolio standard—a state policy that requires utilities to purchase a minimum amount of their electricity from renewable sources—to 100 percent renewable electricity by 2035.[ii]

The bill would also require the state Departments of Transportation and Energy Resources to conduct studies identifying ways to reach 100 percent renewable energy in the transportation and building sectors. In particular, the bill would require that policies be identified that would expand access to renewable energy and energy efficiency options for low-income communities.

The Bureau of Labor Statistics released data that show that households in New England paid electricity prices last month that were 47 percent higher than the national average. Consumer energy information for the Boston region showed the area’s households paid an average of 19.5 cents per kilowatt hour for electricity, compared to the national average of 13.3 cents. The region includes Hampden and Worcester counties as well as Greater Boston and parts of New Hampshire, Connecticut and Maine. High electricity prices in the area are due to a lack of power generation and the high cost of natural gas to supply generating stations due to the lack of pipeline infrastructure.[iii]

The state’s electricity rates are expected to go up more beginning next year. Eversource, an electric utility servicing Western Massachusetts, has proposed a 10 percent increase in its electricity distribution rates beginning January 1, 2018. The company is requesting new delivery rates to alleviate a revenue deficiency of $35.7 million for the company’s Western Massachusetts service area. The company also plans to upgrade its electrical network, making outages less frequent and shorter in duration, and build up its electrical infrastructure to allow for an increase in the number of electric vehicle charging stations. The new rates would mean an increase of about $11.64 on the average monthly bill for a home that uses 550 kilowatt hours of electricity a month.[v]

The proposed rate increase is part of what the utility is calling a Grid-Wise Performance plan. Grid-Wise includes automated vices and technology to cut the incidence and duration of power outages, an energy storage program to store power, an enhanced electric-grid management system; tools for the integration of distributed energy resources; and an electric vehicle charging infrastructure. As electric utilities are required by state policy to use more power from intermittent sources such as wind and solar power, expensive electric storage will be needed.

Generation sources such as coal or natural gas are under the control of the grid operator and are available on demand. Wind and solar power that is in excess of demand must be stored in large batteries or other expensive storage devices that can be called upon when there is insufficient wind and solar to meet

Massachusetts Cannot Control the Sources of Its Electricity 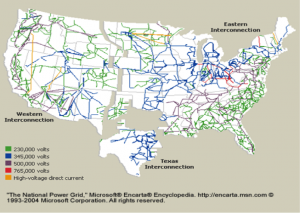 Electrons move across the wires of the electricity grid and their movement cannot be controlled to ensure that only renewable energy is used within a state. So while Massachusetts may want to limit its electricity And, it cannot rely solely on renewable power unless it has expensive storage devices to provide back-up power when the wind and sun cannot.

In 2015, the United States consumed petroleum products for 92 percent of its transportation needs. Natural gas supplied 3 percent, renewable energy in the form of ethanol and biodiesel supplied 5 percent, and electricity supplied less than 0.5 percent. To imagine a complete transformation away from fossil fuels in the transportation sector in 33 years is a bit far-fetched. Massachusetts would need to be entirely dependent on vehicles that either use biofuels or electricity that is entirely produced from renewable energy.

In 2008, President Obama called for a million electric vehicles on the road by 2015. In March 2009, he issued an executive order that provided “$2.4 Billion in Funding to Support Next Generation Electric Vehicles” to help meet his goal. He again mentioned it in his January 2011 State of the Union Address: “We can break our dependence on oil…and become the first country to have one million electric vehicles on the road by 2015.” Yet on January 1. 2016, after billions of U.S. taxpayer dollars were spent on electric vehicles subsidies, only about 400,000 electric cars had been sold.[vi] There are numerous problems with electric vehicles that include being more expensive than the comparable gasoline-fueled vehicles and more limited on vehicle range. Further, their trunk space is occupied by large batteries that limit cargo space for other goods. In late 2015, the number of charging stations in the United States was estimated at about 12,700, but that number is a small fraction of the stations selling gasoline[vii]—just 9 percent.

There are more flexible fuel vehicles on U.S. roads than electric vehicles—almost 20 million. Flexible fuel vehicles have an internal combustion engine and are capable of operating on gasoline and any blend of gasoline and ethanol up to 85 percent flex fuel called E85. E85 is a gasoline-ethanol blend containing 51 percent to 83 percent ethanol, depending on geography and season. Many flexible fuel vehicle owners do not realize that their vehicles are flex fuel and that they have a choice of fuels.[viii] As a result, they typically buy gasoline with just 10 percent ethanol.

Retail distribution stations selling E85 tend to be concentrated in certain areas of the country. As of August 1, 2014, there were 3,354 retail stations in the United States selling E85. According to the Oil Price Information Service, there are approximately 140,000 publicly accessible retail gasoline stations in the United States. Thus, only 2.4 percent of U.S. retail stations sell E85. Further, Massachusetts has only 8 of those stations.[ix]

Further, requiring all of its energy requirements to come from renewable energy is a bit far-fetched when the infrastructure is not in place to meet that requirement—certainly it does not exist in the transportation sector. And, even if Massachusetts were able to meet that requirement, it would hamper the mobility of its residents who need to travel elsewhere in the United States.