On May 22, 2013, Tesla Motors announced that it had paid back its $465 million loan to the Department of Energy, nine years before its full loan was due.[i] Tesla was awarded the loan, requiring matching private capital obtained through public offerings, in 2010 as part of the Advanced Technology Vehicle Manufacturing program. This program was signed into law by President George W. Bush in 2008, but the awards were made by the Obama administration. While another electric vehicle company under this program is in trouble (e.g. Fisker Automotive), Tesla is not. Tesla Motors is different for a number of reasons that include: a recent increase in the value of its stock along with the sale of new stock and debt securities earning about $1 billion, way more than it needed to repay the loan, an enviable stash of environmental credits from the state of California that is valued at $250 million for this year, and the deep pockets of Elon Musk, Tesla’s co-founder.

Tesla Motors was founded in 2003. For the first seven years since the company’s founding, it was funded entirely with private funds, led by Elon Musk, a billionaire and company co-founder. Before receiving a government loan, the company marketed its Roadster sports car with a 30 percent gross margin, designed electric power trains for Mercedes, and undertook a preliminary design of its Model S vehicle. The company began selling the Roadster in 2006, starting at $109,000.[ii] So, the company was not just getting off the ground; it had private backing and had a few milestones under its belt. Nonetheless, the Department of Energy granted it a loan guarantee of $465 million and the California Energy Commission added a grant of $10 million last year.

The company sold 2,650 vehicles in 2012 and expects to sell 21,000 cars by year end, selling 4,900 during the first quarter of 2013 of its newer, lower cost Model S sedans. For the first time in its 10 year history, the company reached profitability, generating a profit of $11.2 million during the first quarter of this year. Total revenues for the first quarter of 2013 increased 83 percent from the fourth quarter of 2012 reaching $562 million. The company exceeded its targets for deliveries, expanded gross margin, and improved its performance, reducing the time to build a car by almost 40 percent between December and March. During that quarter, raw materials declined by almost 26 percent, unit production increased by 80 percent, and improved inventory management contributed over $30 million in cash.[iii]

The initial burst of demand for the Model S sedan during the first quarter of 2013 and improved company productivity helped raise the price of its stock. On May 15, 2013, the company announced the public sale of 2,703,027 shares of common stock and $450 million in convertible senior notes.[iv] The sale brought in about $1 billion, more than expected, and afforded the company the opportunity to repay its loan to the Energy Department.[v] 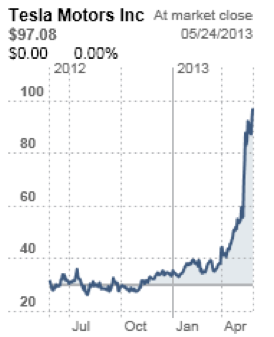 During the first quarter of 2013, Tesla received about $68 million (12 percent of revenue) from the sale of zero vehicle emission credits. Note that without the sale of these credits, the company would have lost over $50 million during the first quarter of 2013. While Tesla expects the credits to decline, according to a Wall Street analyst, Tesla can earn as much as $250 million this year on their sale. Translated into dollars per vehicle, Tesla can make as much as $35,000 extra on each sale of its luxury Model S electric sports sedan through state environmental credits that it can sell to other auto manufacturers that need to buy credits to satisfy California regulations. Adding in the Federal tax credit of $7,500 per vehicle and a state rebate of $2,500 per vehicle, the state and federal incentives total as much as $45,000 per vehicle that Tesla can sell for as much as $100,000, depending on the model and options.[vi]

One thing that Tesla has always had in its favor is Elon Musk’s backing.  As a technology magnate, he acquired and then built PayPal into an extremely valuable company, which he later sold. According to Bloomberg Billionaires Index, Musk is worth $4.5 billion. Tesla never had the need to ask the American people for a half billion dollar loan. If Musk believes in Tesla, and he obviously does, he could have put up the money instead of asking the American taxpayer with an average per capital personal income of $42,693 to subsidize the risk on his line of credit.

While Tesla expects its fortunes to continue with record sales, its first quarter 2013 sales accomplishments may just be the result of enthusiasts rushing to buy the latest technology on the block. The market for electric vehicles may not be as big as the company projects due to the issues surrounding electric vehicles such as their high cost, low vehicle range, small trunk space and difficulty finding refueling stations, to name just a few. When those issues become apparent to consumers, its sales may taper off, making its stock price plunge. Clearly, what could help is a more affordable priced vehicle that could appeal to more consumers.

From the fourth quarter of 2012 through the first quarter of 2013, Tesla saw total gross margin increase from 8 percent to 17 percent as a result of a higher Model S production rate, manufacturing efficiencies, cost reductions and regulatory credit sales. Its improved performance raised its stock price and afforded the company to sell stock that allowed it to pay off its loan to the Department of Energy. While the company believes it will sell 21,000 cars this year, time will tell.

According to the newly confirmed Secretary of Energy, Ernie Moniz, “While the market has taken longer than predicted to get going, sales of electric vehicles in the U.S. tripled last year and are continuing to increase rapidly in 2013. Tesla and other U.S. manufacturers are in a strong position to compete for this growing global market.”

But, electric vehicles still have a long way to go to catch up to sales of traditional gasoline and diesel powered vehicles. During the first four months of 2013, plug-in cars accounted for less than 1 percent of total vehicle sales.[vii] And one thing is abundantly clear from Tesla’s financial experience with electric cars: thus far, this is a market created by the government, and without the government’s powers, it would not exist.

MURPHY: Using the CBO Report to Critique a US Carbon Tax