The newly released “President’s Climate Action Plan” is aptly named, for “planning” is the traditional term that socialists used when trying to centrally run the economy. Indeed, the president’s plan dabbles in: emissions of hydrofluorocarbons and methane; forest growth; promotion of so-called clean energy; task forces at the state, local and tribal levels; building integrity; resilience in health care; conserving land and water resources; insurance leadership; launching a “climate data initiative”; mobilizing “climate finance”; and a host of other items.

Beyond the audacity and hubris of such a plan, is the fact that it relies on dubious economics. Even taking the peer-reviewed mainstream literature at face value, much of the action plan document is unjustifiable.

Early on, the plan sets the stage for action:

While this progress is encouraging, climate change is no longer a distant threat – we are already feeling its impacts across the country and the world. Last year was the warmest year ever in the contiguous United States and about one-third of all Americans experienced 10 days or more of 100-degree heat. The 12 hottest years on record have all come in the last 15 years. Asthma rates have doubled in the past 30 years and our children will suffer more asthma attacks as air pollution gets worse. And increasing floods, heat waves, and droughts have put farmers out of business, which is already raising food prices dramatically.

These changes come with far-reaching consequences and real economic costs. Last year alone, there were 11 different weather and climate disaster events with estimated losses exceeding $1 billion each across the United States. Taken together, these 11 events resulted in over $110 billion in estimated damages, which would make it the second-costliest year on record.

Such claims are in the familiar heads-we-win-tails-you-lose camp of the environmentalist interventionists. Whenever there is an unusual cold spell, the proponents of carbon taxes and other measures insist that we can’t look at short-term trends. Yet whenever there is a spell of unusually hot weather or drought, suddenly this is taken as direct evidence of climate change—even though the NOAA-led report on the 2012 “flash drought” said it was due to natural variations, not man-made climate change.

Moreover, it is simply not true that humanity is a current threat. Here is a chart from Richard Tol’s survey of the economics literature, showing different estimates of the effect of global warming: 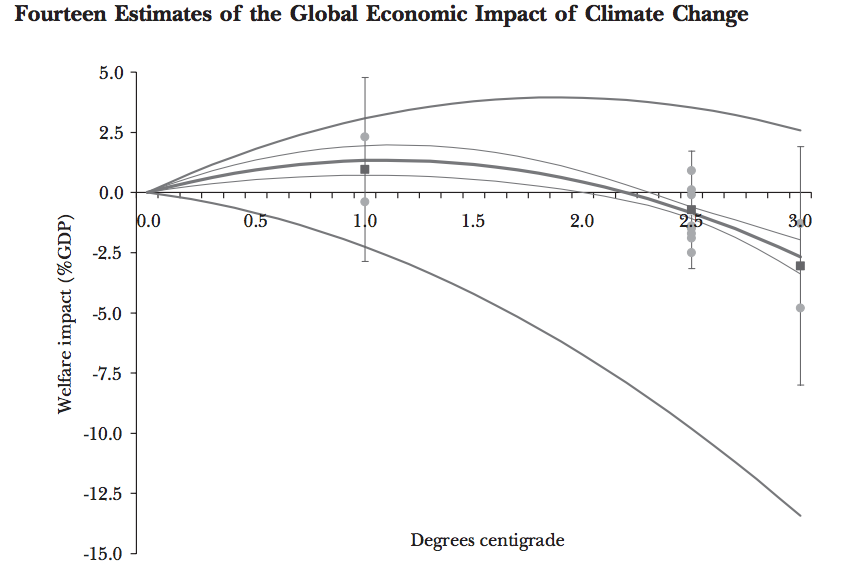 As the diagram above indicates, the consensus among scholars in climate change economics is that global warming at first will shower net benefits on humanity. Some of these benefits include longer growing seasons for certain farmers, longer seasons for water skiing and other summer recreational activities, fewer deaths from extreme cold, lower heating bills, and so forth.

As the above chart shows, the consensus in the literature projects that global warming won’t begin to cause net damages until after two degrees of warming has occurred. This won’t happen until after the year 2050 according to the U.N.’s IPCC models. To be sure, I (and many other economists) have doubts about even these estimates, because (among other problems) they often downplay the resilience of humans to adapt to change. My point, however, is that the Obama Administration’s casual commentary on recent weather events is not consistent with the standard literature on the impacts of climate change.

Even if one bought into the notion that carbon dioxide and other greenhouse gas emissions posed a “negative externality” requiring government intervention, at most the proper remedy would be a carbon tax or cap-and-trade program, designed to make emitters feel the full costs of their activities.

Yet the Obama plan goes much farther than simply calling for a “price” to be put on greenhouse gas emissions. No, it calls for a host of measures, including arbitrary goals to increase renewables as a share of total output, and a 30 percent budget increase for “clean energy” funding. This represents inefficient top-down central planning, which would be hard for any economist to justify even if we stipulate the “market failure” perspective on climate change.

In particular, increasing fuel economy standards—a key part of the plan—is an outrageously inefficient way to try to address manmade climate change. Not only do these regulations kill motorists (by leading to lighter vehicle design) and price an estimated 7 million drivers out of the market, but they only apply to new models coming onto the road, rather than targeting the older vehicles that have achieve much fewer miles per gallon. Further, a well-known phenomenon in energy economics called “Jevons’ Paradox” shows that more fuel-efficient vehicles actually promote more driving, partially or even completely offsetting the impact on total emissions. It would be difficult to design a costlier way to try to put a dent in global warming.

The president’s plan has an entire section devoting to U.S. “leadership” on these issues. This shift in rhetoric is absolutely crucial, as more and more people learn the dirty little secret that unilateral action by the U.S., or even by the U.S. and Europe, will do little to avert the path of global emissions. This is because China, India, and other developing regions will see the largest growth in emissions over the coming decades. As Chip Knappenberger has demonstrated—using the IPCC’s own models—the U.S. will only be responsible for about two-tenths of a degree centigrade of global warming through the year 2100. Thus, even if the U.S. completely banned greenhouse gas emissions—something it won’t come close to doing—the bulk of projected warming would occur anyway.

It will be very difficult for the U.S. and other advanced countries to convince their poorer peers to let their people remain at a relative disadvantage, by shackling their economic growth through strict limits of emissions growth. It’s one thing to call for “leadership” on climate action in a political document, but it is another to convince governments around the world to sacrifice their current prosperity because computer simulation models warn about dire consequences decades down the road. Political leaders can’t even balance their budgets; are they really going to agree to a global carbon treaty?

To see the scope of the difficulty in getting China and India to reverse course and reduce their carbon dioxide emissions, consider this chart (with data from the Global Carbon Project) of the percentage change in carbon dioxide emissions over the past 10 years. The governments of China and India believe that coal-fired power plants provide an inexpensive, reliable, and economically important part of their growing economies. Furthermore, an estimated 300 million Indians (the same as the population of the U.S.) do not have electricity and India’s carbon dioxide emissions will only increase as more people have access to electricity as India builds more coal-fired power plants. 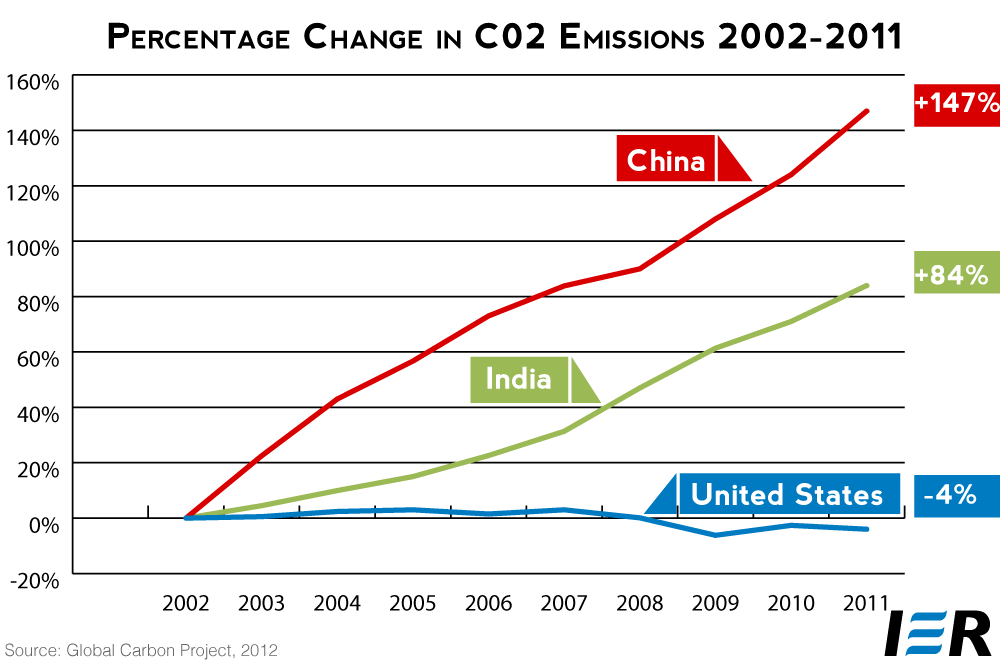 The newly released President’s Climate Action Plan is a cornucopia of top-down commands to tax and micromanage the energy sector. It talks about imminent climate threats that the government’s own scientists don’t endorse, and it calls for policy actions that cannot be justified even on their own terms. If implemented, the president has advanced a plan for higher energy prices, slower economic growth, and a shifting of industry to China and India.