1. No subsidies. Energy subsidies do one thing—they increase the price of energy of all Americans and line the pockets of the special interests that promote these discriminatory policies.  To build a stronger economy and create more jobs, we should reduce all federal energy subsidies and set-asides—the means no subsidies for oil, coal, natural gas, wind, solar, or any other type of energy. 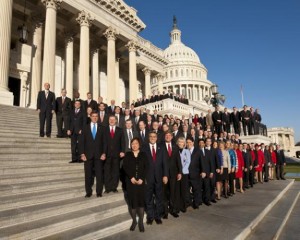 2. End the permitorium on offshore energy exploration and production. The Deepwater Horizon accident was a terrible tragedy, but the Obama administration’s response has been catastrophic. The administration has brought new energy and development to an almost complete standstill by refusing to issues the necessary bureaucratic permits.

3.     Increase our energy and economic security by offering more federal lands for energy production. Past administrations have only offered less than 5 percent of the federal lands for energy exploration and production. The anti-energy Obama administration is offering even less land, is cancelling plans to allow more exploration, while refusing to issue permits explore the lands that are open. On top of that, they are abusing the judicial system by settling lawsuits with anti-energy groups designed to slow down or stop domestic energy production. Part of energy security and economic security is being able to produce energy…and jobs…right here in America.

5.     Examine, repeal and replace the federal “green tape” that is slowing down, stopping or making impossible private investment in new energy infrastructure in the United States. Federal laws bred in the 60’s and passed in the 70’s usurping state and local authority over matters not enumerated in the Constitution should be returned to those authorities.  The nationalization of energy decision-making has changed the American “can-do spirit” into a “can’t-do” attitude that has created a bloodletting of the lifeblood of our economy.  The economic terrorism currently threatening every energy project in the nation must stop.  The laws which provide a platform for these actions must be reviewed, repealed or replaced with commonsense measures that recognize constitutional boundaries and the limits of central government.

Talk is Cheap: We Need Action on Offshore Drilling Permits