First shale oil and now offshore deep-water oil are reducing their costs of production, making it more difficult for OPEC’s policies to have the intended effect. Shale oil production costs have come down significantly over the past several years, making its production profitable at below $40 a barrel. Now, deep-water oil production is expected to bring down its costs to between $40 and $50 per barrel by early next year from an average break-even price of about $62 in the first quarter of this year and $75 in 2014. OPEC expects to keep oil prices between $50 and $60 a barrel by extending its production cuts for another nine months—keeping roughly 2 percent of global oil production off the market to increase prices.

In December, BP decided to move forward with its Mad Dog Phase 2 project in the U.S. Gulf of Mexico with costs estimated at $9 billion compared to an earlier estimate of $20 billion. In February, Royal Dutch Shell approved its Kaikias deep-water project in the U.S. Gulf of Mexico at a break-even price below $40 a barrel. Over the next three years, eight offshore projects may be approved with break-even prices below $50. These cost reductions are possible because rental rates for drilling rigs have been cut in half since 2014, and companies are redesigning projects to be more cost efficient instead of maximizing output.

As of March 17, U.S. oil production in the U.S. Gulf of Mexico was 1.76 million barrels per day—a record—and 33 percent higher than March 2014. (See graph below.) According to Citigroup, deep-water output could grow by more than 1 million barrels a day by 2022.[i] 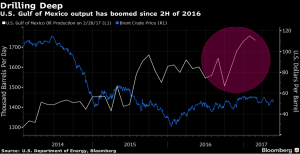 Companies working in shale oil basins reduced costs and improved productivity with break-even costs in the best fields in the $30 range. The cost reductions have doubled the number of drilling rigs in the United States since last year. In the Permian Basin—the largest U.S. oilfield—Parsley Energy, Diamondback Energy and other companies are pumping at the fastest rate in years, taking advantage of new technology, low costs and steady oil prices.[ii] Up to 95 percent of new wells drilled today are hydraulically fractured, accounting for over 43 percent of total U.S. oil production. Energy from shale and other tight-rock formations supported 2.1 million jobs in 2012 and that number is projected to grow to 3.9 million jobs by 2025.

The increased activity, however, is causing production costs to rise. Prices for pressure-pumping equipment and sand, both of which are essential to hydraulic fracturing, have increased by over 20 percent this year.

Many analysts estimate U.S. oil production will reach 10 million barrels per day next year–a 1 million barrel per day increase–a huge jump for an industry that had scores of bankruptcies and thousands of layoffs in 2015 and 2016 after a two-year price war with OPEC. But rather than working to keep its market share as it did earlier, OPEC has turned to production cuts to keep oil prices around $55 a barrel. According to Citigroup, the shale revolution is “unstoppable” unless prices fall below $40 a barrel.

Despite the obstacles that Obama Administration policies placed upon the U.S. oil industry, the industry has thrived and become more efficient and productive. Investments in innovative technologies and operational improvements have made it possible for the United States to lead the world in the production of oil and natural gas while keeping oil prices and gasoline prices low for consumers.

[i] Bloomberg, Now There’s Another Source of Oil That’s Starting to Get Cheap, May 31, 2017, https://www.bloomberg.com/news/articles/2017-05-30/trouble-brewing-for-opec-as-once-costly-deep-sea-oil-turns-cheap

Fossil Fuel Consumption Subsidies, While in Decline, Are Still Pervasive in the Developing World