The wind Production Tax Credit (PTC) is a tax subsidy that was set to expire at the end of 2013, just as it was supposed to at the end of 1999, 2001, 2003, 2005, 2007, 2009, and 2012. The wind PTC, enacted in 1992, supports an industry that simultaneously claims it is an “infant industry” and that it is 100 percent competitive with other sources of electricity generation. In reality, wind generation has been around for more than a hundred years, and its recent growth has been driven by public policy, not consumer demand. Having grown five-fold since 2006, the wind industry does not need more subsidies from the government. Rather, it should be set free to see if it can withstand the demands of the market and test its true reliability and efficiency. More government aid at the expense of taxpayers will only push wind deeper into the “rent-seeking” business when the industry should instead focus on creating real value. 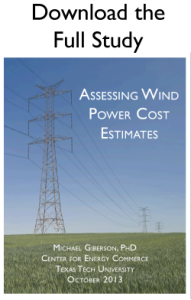 A proposed offshore wind development is generating a lot of discussion in New Jersey. Developers and environmentalists hope to cash in on hundreds of millions in government subsidies while businesses and ratepayers fear offshore wind will result in electricity rate hikes.  So far, the 25 megawatt (MW) Fishermen’s Atlantic City Windfarm (FACW) project, three miles off the New Jersey coast, has been denied approval by the New Jersey Board of Public Utilities (BPU) for being too expensive and risky for residents, though FACW continues to work towards an acceptable resolution. A closer look at the proposal shows just how unsustainable wind projects are without the crutch of public subsidies and government mandates.

All Trick, No Treat: How Wind Turbines Kill Bats and Hurt Farmers

The wind industry promotes itself as better for the environment than traditional energy sources such as coal and natural gas. For example, the industry claims that wind energy reduces carbon dioxide emissions that contribute to global warming.

‘Cuisinarts of the Sky’ Continue to Dodge Environmental Laws

Wind turbines injure, maim, and kill hundreds of thousands of birds each year in violation of federal law—more than 573,000 last year alone. And yet, inexplicably, the federal government does almost nothing about these deaths.

What if Your Life Were as Unreliable as Wind?

Despite the claims of the wind industry, wind power is inherently unreliable because no one can control the wind. It also consistently underperforms reliable electricity sources in terms of capacity factor. That is, wind installations only produce energy at about 34 percent of their capacity, according to the Energy Information Administration. Compare that to the 85 to 90 percent capacity factors for natural gas, coal, and nuclear generators.

Today, the House Oversight and Government Reform Subcommittee on Energy Policy, Healthcare, and Entitlements held a hearing on the Wind Production Tax Credit (PTC). Once again the wind industry trotted out the same arguments in favor of keeping and extending their subsidies, as Robert Gramlich, Senior Vice President of Public Policy for the American Wind Energy Association (AWEA), outlined in his testimony. Much of the testimony rehashed claims that the Institute for Energy Research (IER) already discredited in April of this year. If the wind PTC is extended by just one more year, it will cost the American taxpayer over $6 billion dollars. It’s time to say that enough is enough.

Like an itch you can’t quite scratch, the wind Production Tax Credit (PTC) is a lavish subsidy that refuses to go away. Created by the Energy Policy Act of 1992, the PTC provides a tax credit of $23 per megawatt hour (MWh) of wind production.

IER’s Robert Michael’s to Testify on the Wind PTC

Testimony of Robert J. Michael’s: Subcommittee on Water and Power

Past AEA and IER Studies 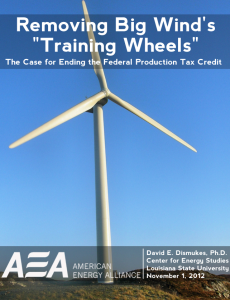 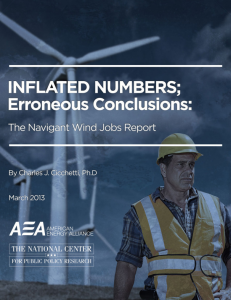