The Institute for Energy Research conducts in-depth economic and policy research on energy and environmental issues. The follow studies provide an extensive analysis of fossil fuels as an energy resource, their impact on markets, and their importance in energy policy debates. Below these studies is an in-depth overview of fossil fuels. 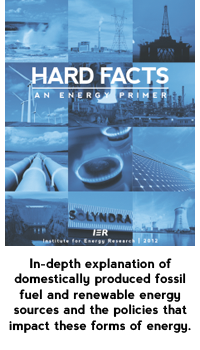 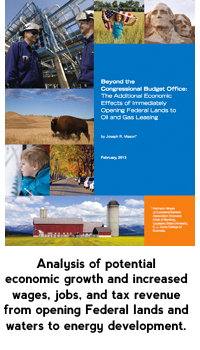 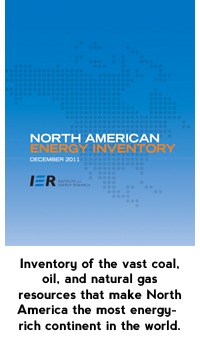 Fossil fuels—coal, petroleum (oil), and natural gas — are concentrated organic compounds found in the Earth’s crust. They are created from the remains of plants and animals that lived millions of years ago in the form of concentrated biomass. According to the US Energy Information Administration (EIA), fossil fuels meet 81 percent [i] of U.S. energy demand.

Fossil fuels make modern life possible. These huge sources of energy work to generate steam, electricity and power transportation systems. They make the manufacturing of tens of thousands of commercial goods possible. And although fossil fuels have become synonymous with modern industrial society, their potential to solve some of the challenges of everyday existence has been understood throughout history.

Scattered records of the use of coal date to at least 1100 BC. By the Middle Ages, small mining operations began to spread in Europe, where coal was used for forges, smithies, lime-burners, and breweries. The invention of fire bricks in the 1400s made chimneys cheap to build and helped create a home heating market for coal. Coal was firmly established as a domestic fuel in much of Europe by the 1570s, and represented the major heating source for buildings, especially in cities located far from easy access to less energy-dense biomass forms.

Coal was the first of the fossil fuels to go into widespread use, displacing low-energy firewood as the leading source of fuel in the US, and triggering the country’s industrialization in the second half of the 19th century. Within a few decades, the US went from a net importer of coal (mostly from Britain) to a major exporter of the fossil fuel, a development made possible by mining the nation’s vast reserves of coal.

Oil was used in architectural adhesives, ship caulks, medicines, and roads in Mesopotamia around 3000 BC. Two thousand years later, the Chinese refined crude oil for use in lamps and home heating. The ancient Chinese also were pioneers in natural gas, using it to make salt from brine in gas-fired evaporators, boring shallow holes, and conveying the gas to evaporators via bamboo pipes. By the 19th century, natural gas was used extensively in Europe and the US as lighting fuel until it was displaced by Thomas Edison’s electric light bulb.

Edwin Drake’s successful extraction of oil at his well in northwestern Pennsylvania in 1859 marked the dawn of the age of petroleum. Petroleum’s first decisive impact was displacing whale oil in lighting in the late 19th century. But it was the victory of the internal combustion engine over steam and electricity as the preferred means to propel the recently-invented automobile in the first decade of the 20th century that thrust petroleum into the prominence it still enjoys today. Fueled by gasoline made from inexpensive and readily available oil, internal combustion cars, notes Alan P. Loeb, “alone offered a combination of speed and power, range and infrastructure that gave motorists the ability to achieve the automotive purposes they desired.”

The US Energy Information Administration (EIA) credits fossil fuels for bringing about “one of the most profound social transformations in history.”

Of the fossil fuels, none has had a more far-reaching effect on society than oil. Oil, in all its forms, is the “transportation fuel” that makes all modern modes of transportation possible and moves both people and goods around the world. Once the products of refined crude oil came into widespread use, the US, along with most of Europe and Japan, was transformed from an agrarian, subsistence and hand-to-mouth society for all but a few to an industrial society in which many shared a better life within a few decades.

Included is a processing gain of 6.3 percent or 2.65 gallons. Thus, a 42-gallon barrel of crude oil in actuality yields 44.6 gallons of refined products.[iii]

The United States was once self-sufficient in oil, but began importing more oil than it produced in 1994. In 2015, 24 percent[iv] of the oil consumed in the US was imported from foreign countries. The top six source nations for net petroleum and petroleum product imports to the US in 2015 were Canada, Saudi Arabia, Venezuela, Mexico, Colombia and Russia.[v]

Despite the rapid growth of global demand for petroleum products, the EIA estimates that less than half the world’s total conventional oil reserves will have been exhausted by 2030. These estimates include existing oil reserves and anticipated reserves resulting from new technologies and discoveries. World oil reserves at the end of 2014 totaled 1656 billion barrels[vi], over 3.1 times their level in 1971.[vii] The world’s oil reserves have steadily increased even in the face of rising consumption. 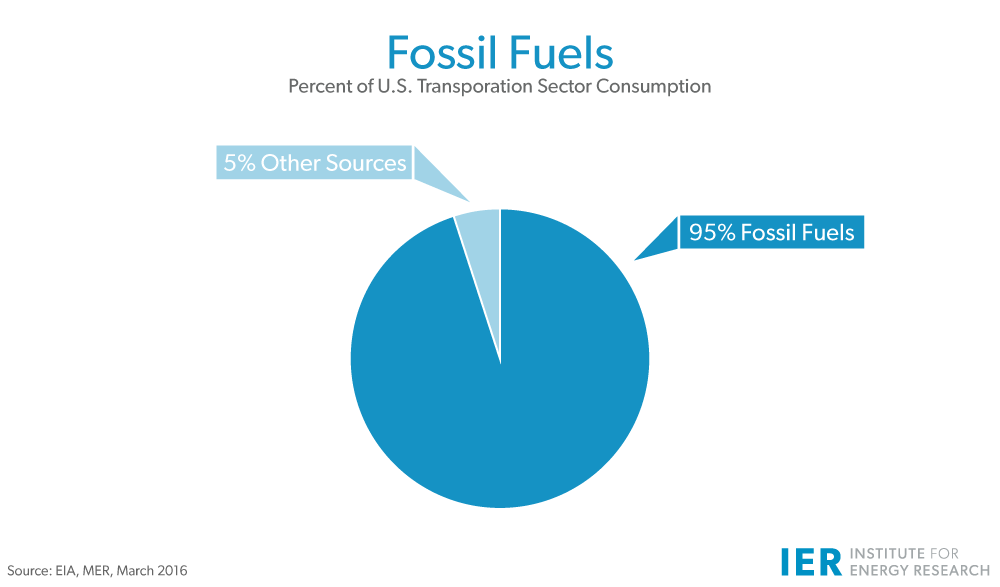 Coal, by the “Short Ton”

Coal, the first of the fossil fuels to make its presence felt in the modern era, remains a major contributor to the world’s energy pool. Once burned in chimneys to produce heat, today coal is widely used as fuel for power plants that generate electricity for residential and commercial customers. In fact, it accounts for over 30 percent of US electricity generation.[viii]

American coal production is currently the second highest in the world (behind China)[ix], delivering 895 million short tons in 2015.[x] The United States has a vast amount of in-place coal resources, over 10 trillion short tons[xi], and has the most technically recoverable coal in the world at 258.6 billion short tons[xii]. From mines around the country, coal is transported to over 500 power plants in the US in diesel-powered freight trains. Similarly, the coal the US exports to overseas markets is carried on ships powered by petroleum-based bunker fuel, a further example of one fossil fuel being used to transport another.

Led by the booming economies of China and India, growing global demand for energy is expected to secure the dominant position of fossil fuels for at least the next several decades. 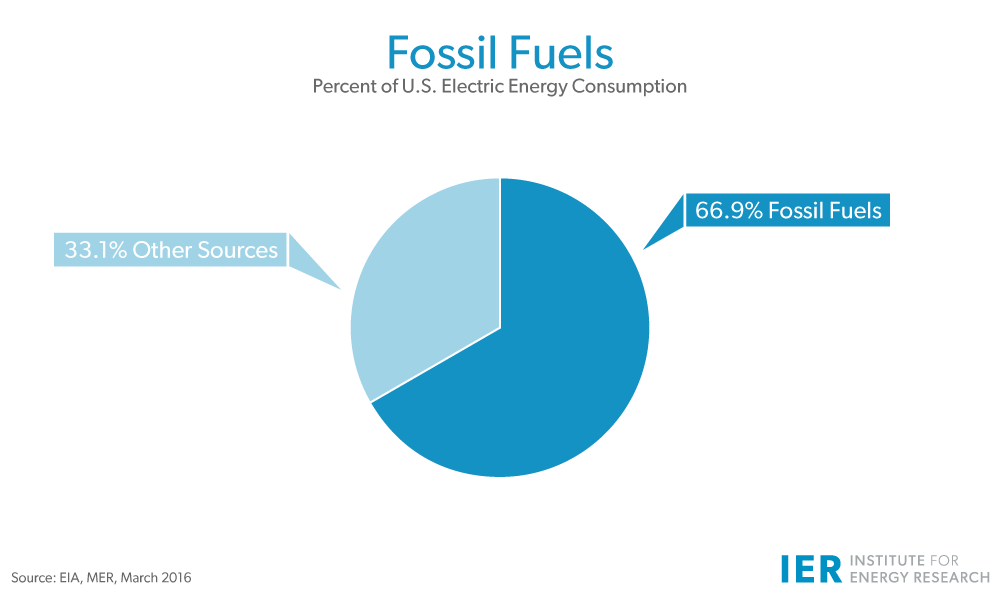 The Energy Information Administration (EIA) in its Annual Energy Outlook 2015 predicts U.S.  liquid fuels consumption to increase 3.3 percent between 2013 and 2020, and then to decline remaining above  2013 levels in 2040. Between 2013 and 2040, natural gas consumption is expected to increase by 13.4 percent and coal consumption by 5.6 percent.[xv] The EIA foresees fossil fuels maintaining their status as America’s leading source of energy consumption between now and 2040, supplying 80 percent of our nation’s energy needs in 2040.

America is endowed with huge quantities of fossil fuels. The responsible use of these resources has fueled our factories, furnaces, homes, highways and hospitals since their first use. Vast quantities exist in untapped forms that hold promise for generations to come. Access to these energy resources and the discovery of new technologies to safely and cleanly use them for the benefit of mankind is an ongoing challenge. Governmental decisions about the use of these energy resources have tended to place them out of reach of the American people, increasing our dependency on others for those supplies.

Because much of our future potential supplies of fossil fuels exist under lands owned by the federal government, its decisions will have a major bearing on how we live our lives. In 2008, in the midst of the highest gasoline price spike in history, President Bush revoked the executive moratoria on offshore drilling, and Congress did not renew its ban on drilling for offshore oil and natural gas. However, while the Bush Administration put forth an accelerated schedule for leasing the Outer Continental Shelf’s oil resources, the Obama Administration extended the comment period on the Bush Administration lease offerings, delayed the ability for oil companies to purchases leases and to undertake exploratory drilling, and excluded most of the newly opened areas in its offshore lease plan for the 2012 to 2017 period. The net result of these actions is a decline in oil and gas production on federal lands, while production on private and state lands where permits take less time to process has been increasing.

[xi] US Department of the Interior, US Geological Survey, http://pubs.usgs.gov/dds/dds-077/  .